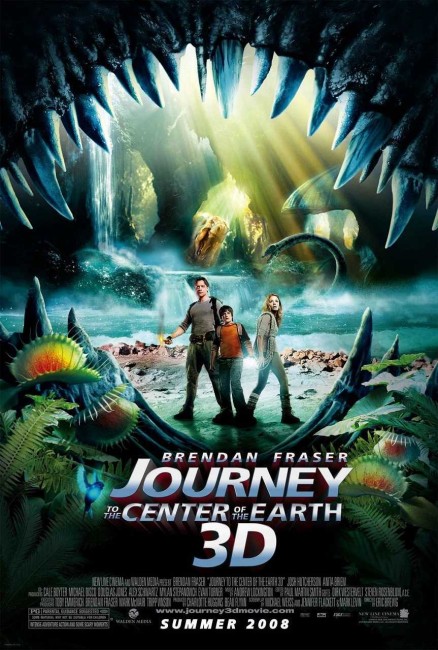 aka Journey to the Center of the Earth

Seismologist Trevor Anderson struggles to continue his late brother Maxwell’s work monitoring sensors in volcanic regions around the world, at the same time as his class dwindles and the university makes plans to close his laboratory down. He forgets that he has agreed for Maxwell’s widow to leave their son Sean with him for the weekend. She also drops off a box of Maxwell’s things. Among these, Trevor finds a copy of Jules Verne’s ‘Journey to the Center of the Earth’, which his brother has marked with extensive notes. Trevor realises that Maxwell believed that Jules Verne’s story was real and that the notes in the book lead the way to the centre of the earth. Following Maxwell’s notes, Trevor decides to head to Iceland with Sean. Joined by Icelandic guide Hannah Asgeirsson, the daughter of one of Maxwell’s late colleagues, they venture into a mine. This collapses beneath them and they fall into a wondrous realm, filled with volcanic marvels and prehistoric creatures.

The film apparently started out as a serious adaptation of the Jules Verne novel planned in 2D by director Paul Chart, best known for the underrated thriller American Perfekt (1997). However, Walden Media pushed the film to be tailored to the new 3D fad. Not happy with the changes, Paul Chart quit to be replaced by Eric Brevig, a visual effects supervisor who has worked at DreamQuest and Industrial Light and Magic and has conducted supervisory work on films such as The Abyss (1989), Total Recall (1990), Men in Black (1997), Wild Wild West (1999), Pearl Harbor (2001), Signs (2002), The Day After Tomorrow (2004) and The Island (2005), among others. Journey to the Center of the Earth 3D was Eric Brevig’s debut as a film director.

The mid-2000s saw a substantial revival of the 3D format, a fad that was at its height in the mid-1950s. As cinema screens start losing money due to reasons as varied as digital piracy, a preference for home entertainment systems and streaming services over theatres, the sheer plethora of product out there and general audience indifference at the inferiority of the films being peddled, 3D has been seen as the one gimmick that can draw audiences back to the multiplex. There are some that even regard 3D as the future of cinema, it becoming a bandwagon fad that everybody was attempting to jump aboard after the massive success of Avatar (2009). The leading format among these has been Real-D, which has seen a number of high-profile films being tailored if not shot for it.

Personally, one has doubts as to whether theatrical 3D is going to take off again as anything other than a passing fad. Theatres have still not bypassed the problem of requiring the viewer to wear a pair of glasses. My objection is also one of pricing – where I used to live in New Zealand, theatre chain Hoyts was charging nearly twice the price of a normal admission (with no concession cards allowed), for which one gets an ill-fitting pair of 3D glasses that are recycled from audience to audience (mine had someone else’s food smudged over one lens).

Surprisingly, for all the ballyhoo made about the 3D format, Journey to the Center of the Earth 3D is not that well photographed with many of the objects that pop out of the screen – yoyos, flares, balls, tape measures – being out of focus. Eric Brevig is also somewhat crass with his pop-up effects at times – one of the first shots of the film is Brendan Fraser getting up in the morning, brushing his teeth and gargling, before spitting the water directly into the camera as it looks up from the hand basin. Later Brevig has Brendan Fraser shoving dirty plates at us and a dinosaur drooling into the camera. That said, Eric Brevig does one of the things that 3D directors seldom do and that is use 3D in terms of depth perspective. There are some particularly good shots once we get underground where most of the backgrounds are created digitally, which allows the underground landscapes to open up with striking effect.

The film’s most absurd scene is where the party sail across the underground ocean on a raft and are attacked by flying fish and drive them off with makeshift baseball bats, just as Josh Hutcherson’s mother somehow manages to get a cellphone signal to call him miles underground, at the same time as a flying fish leers at and starts trying to sink its teeth into Anita Briem’s butt. It is a sequence would make for great comedy, although one suspects that that was not Eric Brevig’s intention. Similarly the scene where the party get blown up the borehole in what looks like the giant jawbone of a dinosaur seems hard to be holding back the titters of potential absurdity.

On the plus side, Journey to the Center of the Earth 3D may be the one film version of the book so far that comes the closest to Jules Verne’s original. Although it adds much that was not in the book, it keeps fairly much to basics of Yokuls Snaeffels, underground oceans and prehistoric life (although surprisingly no encounters with prehistoric hominids) and the climactic blast out the borehole to emerge in Italy.

That said, more so than a film adaptation, what we seem to have is Journey to the Center of the Earth: The Real Story with Brendan Fraser setting out to discover the truth behind Verne’s book. Although, surely if these supposed Verne-ists exist as the film claims, then they would have found the way via the real world location of the Icelandic volcano Yokuls Snaeffels that Verne specifically mentions. Indeed, with the popularity of the book you would expect the Centre of the Earth to have become a tourist destination by now.

New Line Cinema and WaldenMedia made a sequel with Journey 2: The Mysterious Island (2012), featuring a return appearance from Josh Hutcherson but not Brendan Fraser, which took the adventure to Jules Verne’s Mysterious Island. Eric Brevig next signed onto to direct the live-action version of Yogi Bear (2010).