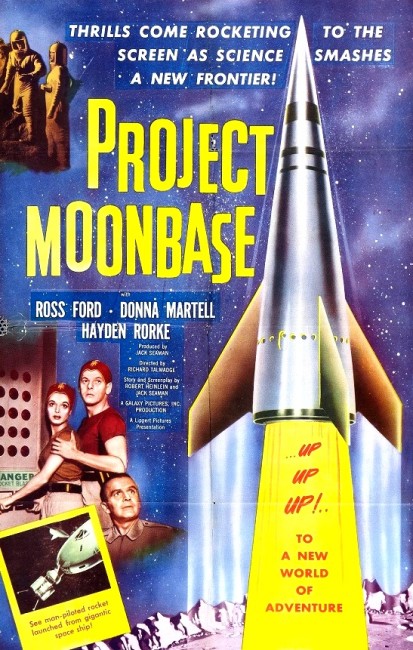 In 1970, the US military have built an orbiting space station, which ensures military advantage over their enemies. However, enemy agents plot to sabotage the space station. With the announcement of The Magellan rocket mission to circle around the dark side of the Moon, the enemy substitute one of the scientists Dr Wernher with a double. Meanwhile, Major Moore, who was to have led the mission, learns that the command has been given to a woman Colonel Briteis. The Magellan launches but the Wernher double’s attempts to sabotage the mission force them to have to make an unscheduled landing on The Moon’s surface.

In the 1950s, the great Golden Age of Science-Fiction was begun by Destination Moon (1950). The film laid forth a bold and startling agenda for the conquering of the new frontier of space. Before 1950s science-fiction cinema ended up being overrun by alien invaders and atomic monsters, there were a number of other films following in Destination Moon‘s footsteps and seeking to conquer space – the likes of Rocketship X-M (1950), Flight to Mars (1951), Riders to the Stars (1954) and Conquest of Space (1955).

Project Moon Base was one such effort among these early spaceflight films. In fact, it falls in Destination Moon‘s shadow in a number of ways – firstly, in emulating its story of the launch of a Moon landing, and also in the employing of Destination Moon‘s co-writer, the renowned science-fiction writer Robert Heinlein, author of works like Starship Troopers (1959) and Stranger in a Strange Land (1961), on script.

Project Moon Base is Destination Moon on an impoverished B budget. It comes in black-and-white rather than in colour, while the models are cheap looking, albeit passably so. It improves over Destination Moon in one technical detail – its depiction of the Moon’s surface is far more like the actual thing, whereas Destination Moon created the surface of the Moon like a dried, cracked riverbed.

Robert Heinlein certainly adds a rigorous level of credible science, which is to be commended. There is an effort made to demonstrate zero g aboard the station, although this results in some peculiar images of people walking past others on the ceiling or improbably holding conversations while seated at 45-degree angles up the wall from the other party. One amusing touch in retrospect is the idea of cordless telephones – devices that laughably come with big long hoops on the end of six-inch long wires. Alas, much of the interest as a plot is scuppered by drearily dull and prosaic direction. Almost the entire film seems to take places as discussions by people seated in rooms.

One element that Heinlein tries to add is a touch of feminism, or at least to portray feminine equality in the male military environment. Maybe it was just Robert Heinlein, who tended to be a dirty old man at times, or maybe it was just the era in which the film was made, but much of the cod-feminism collapses into embarrassing sexism. For one, the woman is given the patronising name of Colonel Briteis (bright eyes). Men deliver putdowns like “You’re not a superwoman, you’re a spoiled brat – anymore out of you and I’ll turn you over my knee and spank you.” Later the woman apologises: “Sorry to have gone female on you, major.” The male junior officer’s attitude toward his woman commanding officer is frequently patronising: “Can I help you up? Can I strap you in?” Despite being cast in the part of a strong woman, Donna Martell fails to project any confident or assured presence. The film ends with the colonel and the major getting married on the Moon. By this point, the spy plot that the film started out with has been completely forgotten.