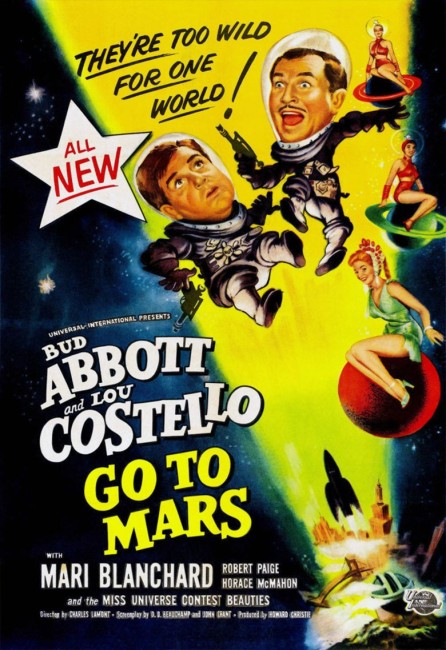 Orville and Lester, two idiotic technicians at a missile base, accidentally launch themselves in an experimental rocketship. The rocket lands in New Orleans in the midst of the Mardi Gras where Orville and Lester mistake the attendees for denizens of another planet. With two escaped convicts stowing away on board, they next head on to Venus. There, to their delight, they become the first males to visit the all-female Venusian society in two thousand years.

Abbott and Costello Go to Mars falls into the bizarre mini-genre of interstellar-matriarchal-society-as-male-sex-fantasies’ items that were peculiar to the 1950s – see also the likes of Cat-Women of the Moon (1953), Devil Girl from Mars (1954), Fire Maidens of Outer Space (1956), Queen of Outer Space (1958) and Missile to the Moon (1959) – wherein astronauts usually encounter planets where women have gotten rid of all men.

Such societies nominally fall into some notion of a feminist dream but this was never the case in any of these films, which always had the societies being subsumed and invariably overthrown following the arrival of men who reintroduce the romance the women have been missing. The women here have all been cast from the Miss USA pageant and come out with lines like: “It’s nice to have a man around the house again.” Not much thought has gone into the construction of the society (which seems to consist of women in Roman togas lounging in cheap tinsel fairy-grotto sets). The women are immortal and have banished men, yet the queen is the only one who can remember what a man looks like – thus there is the small question of how the others managed to get there.

The earthbound scenes are slightly better than the slapstick inanity once we arrive on Venus. The New Orleans scenes with people wearing oversized heads momentarily attain a certain Alice in Wonderland-like surrealism. There is an occasionally engaging slapstick energy to it all.