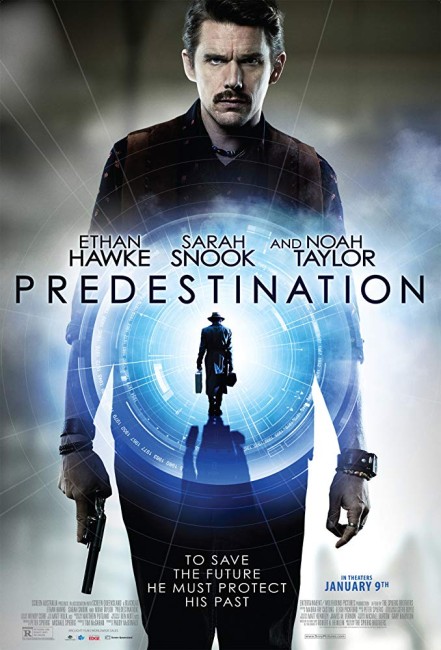 An agent of the Temporal Bureau recovers after his features are hideously burned during an attempt to stop a terrorist nicknamed The Fizzle Bomber in 1975. With his face reconstructed, he is sent back to New York City in 1970 to try apprehending the bomber again. Posing as a barkeep, he begins talking to John, one of the patrons, who promises to tell one of the strangest stories he will ever hear. John tells how he began life as Jane Doe, a baby abandoned on the steps of an orphanage. Growing up, Jane excelled in the sciences and was recruited into the SpaceCorp as one of the first potential women astronauts. Dismissed from SpaceCorp, she tried to make it in civilian life but was then seduced by a mysterious stranger. The stranger abruptly abandoned her, only for her to find that he had left her pregnant. She prepared to settle into motherhood only for the child she gave birth to to be stolen from the hospital. She was then informed that she was found to be a rare case of somebody born with both male and female sex organs but that the pregnancy had meant that they had to operate to remove her uterus. She then had the difficult job of adjusting to life as a man. The barkeep then asks John if he would be prepared to kill the man responsible for her misery and he says unequivocally yes. The barkeep takes him on a journey back through time to 1964 where John finds that his own history and the barkeep’s is wound together by temporal predestination.

Australia’s Spierig Brothers, twins Michael and Peter, first made a splash with Undead (2003), a zombie splatter film where they funded and largely performed just about every duty behind the camera themselves. This gained a reasonable degree of attention and was distributed internationally. This led to the Spierig Brothers obtaining a $21 million budget to make Daybreakers (2009), their first collaboration with Ethan Hawke. This received a mainstream multiplex release where it was a reasonable success and proved a well worthwhile addition to the vampire genre in terms of offering fresh and original ideas. Predestination was their third feature film. They subsequently on to make the Saw series revival Jigsaw (2017) and the real-life haunted house story Winchester (2018).

Predestination is based on the short story All You Zombies (1959) by Robert Heinlein (1907-88). Heinlein is regarded as one of the grandmasters of science-fiction literature and has produced numerous classic novels that include Have Spacesuit, Will Travel (1959), Starship Troopers (1960), Stranger in a Strange Land (1961), The Moon is a Harsh Mistress (1966), I Will Fear No Evil (1970) and Time Enough for Love (1973), among a great many others. It was his influence on the genre in the 1940s that was seen as something that caused science-fiction to move from space opera to a genre of ideas. Heinlein’s works have been sporadically adapted to the screen – see bottom of page – and he even wrote the scripts for a couple of films in the 1950s.

When it comes to the film version, the title All You Zombies has been replaced by the more anonymous Predestination presumably so as not to cause any confusion with the horde of zombie films being made in the 2000s/10s. (There are no zombies in the story; it is a line where the narrator speculates about who all the other people around him are and where they came from).

The Spierig Brothers keep very closely to the text of All You Zombies. They do however make several major additions. The most notable of these is the introduction of Ethan Hawke as being an agent of the Temporal Bureau assigned to go back in time to stop the Fizzle Bomber. This is perhaps a necessary addition in terms of giving some motivation to the Barkeep’s journeys back through time. There is also the end scenes where Ethan Hawke meets a much older version of himself, which do not exist in the story.

On the other hand, the Spierigs keep to details of the story with an amazing degree of faithfulness including retaining some of the dialogue from the story, even the touch of having the song I’m My Own Grandpa (1947) playing on the barroom jukebox by (it is implied) the elderly barkeep. Another aspect they retain is having the scenes with Sarah Snook at university set in 1964 and the barroom scenes in 1970 – although, where for Heinlein writing the story 55 years earlier, these scenes were set in the future, now they are set in the past familiar to the audience where the Spierig Brothers do a very nice job of replicating the respective eras, especially good being the retro-futurism of the scenes at the 1960s space agency.

In the way that any good conceptual science-fiction does, Predestination is a film that captures your interest and then screws with everything you assume. This first of these comes when Ethan Hawke asks the guy at the bar to tell his incredible story, which starts with the classic attention-grabbing line “When I was a little girl …”. This causes a double-take as you suddenly realise that the guy who had been sitting before you and chatting for several minutes is actually played by a girl.

You are left astonished by the acting range Sarah Snook is demonstrating in getting all the attendant mannerisms of a hard-bitten guy down pat. It is a phenomenal change when we then see her as a shy bespectacled teenage girl in the flashbacks. The tale that she proceeds to tell – even discounting the science-fiction aspects of the story and the twists that come after its telling – proves to be an enormously affecting one where we follow the history of a talented and ambitious girl before things are turned around and she is forced to undergo gender reassignment. This is maybe one of the best and most affecting works about sexual interchange that we have had on screen to date.

Of course, this is only the first act of the story. It is after this point that his/her backstory finishes that Predestination gets wonderfully twisty. This begins with [PLOT SPOILERS HEREAFTER] the scene where Ethan Hawke reveals himself to Sarah Snook and promises to take him back in time to 1964 so that he can kill the mystery man who seduced, impregnated and then abandoned her, causing all the misery in her life – only for Snook (now in a male body) to end up becoming the actual mystery man who seduced her younger self.

Things become even more twisted when we discover that it was Ethan Hawke who went forward in time, stole the baby from the orphanage and then returned in time to drop the infant on the steps of the orphanage. By this point, you mind is also doing incredible flips as you realise that you are dealing with one person who not only became a man and impregnated his/her female self but then through the convolutions of time travel actually came to serve as their own mother and father as well. You can see the final twists coming – the Spierigs do some obvious foretelling – but they are beautifully handled nevertheless.

(Winner in this site’s Top 10 Films of 2014 list. Winner for Best Adapted Screenplay, Nominee for Best Actress (Sarah Snook) at this site’s Best of 2014 Awards).