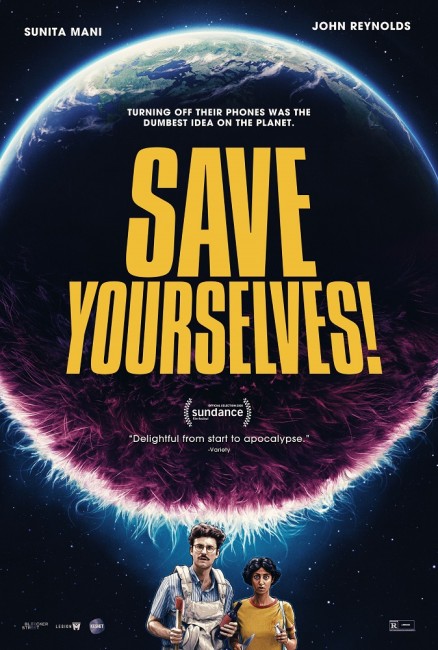 Jack Wyndham and Su Raji, a young couple living in Brooklyn, decide they are too wound up in their mobile devices and online life. They make a decision to get away from it for a week to a friend’s cabin in Pine Bush, New York where they can switch off all their devices and reconnect with one another. As they settle in, they begin noticing furry balls around the area that Su takes to be pouffes. As they switch their phones back on, they discover that while they have been incommunicado the Earth has been invaded by aliens – the pouffes. They are now forced to defend themselves as the pouffes begin attacking.

Save Yourselves! was a feature-length debut for Alex H. Fischer and Eleanor Wilson. Both had directed various short films before but neither together, while Wilson also has some credits as an actress.

Save Yourselves! comes with the amusing pitch of hipsters facing an alien invasion. The bulk of the film is centred around a couple, Sunita Mani and John Reynolds, as they go on a retreat, switch off their social media devices and try to follow a Top 10 list of ways to connect. As we watch John Reynolds in particular and his bread-making, quandaries over cutting wood and their anguish about what they are turning into in having to arm themselves with a gun, the film seems to be setting out to poke fun at hipsters.

While the idea must have seemed amusing on paper, Save Yourselves! doesn’t emerge as particularly funny. We have a duo of characters and their various interactions all conducted in a mildly ironic-trying-for-cutsie way that never sufficiently coalesces into anything that you can laugh at. The film’s one shining light is John Reynolds who slots into his role as the clueless hipster as though he was born to the part – he excels in a speech in the middle where he opens up and opines about how he feels like he has failed at the role of being a man. Opposite him, Sunita Mari tries but comes out as fairly colourless.

The biggest disappointment of Save Yourselves! for me was how it works (or fails to work) as an Alien Invasion Film. Okay so it is meant to be a comedy about how two clueless people react to an invasion rather than a Roland Emmerich-styled epic of mass destruction. Fischer and Wilson create a very low-key film where the alien are represented by what look like oversized tribbles. These roll around in an effects-avoidant way and occasionally sprout a tentacle, along with the odd scene where they splatter someone’s head. This makes the film resemble a very low-tech version of Critters (1986) or one of its sequels. On the other hand, it is one where the invading aliens never attain much in the way of threat.

The film never moves out of the mild amusement of poking occasional fun at Reynolds and Mari’s hipster quirks. The latter third of the show does develop some more drama as they leave the comforts of the cabin and try to fights off the pouffes, have their vehicle stolen and are then lumbered with responsibility for a baby. However, the film fades out on a puzzling “huh???” of an ending where Reynolds, Mari and baby are caught in a transparent bubble of alien origin and lifted off towards the stars. It is an ending that comes left field and is all the more bizarrely puzzling for not letting us know where the bubbles come from or where everyone is being transported.