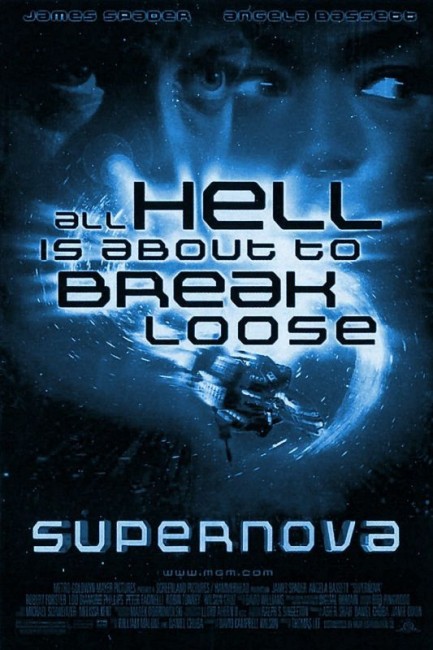 The deep space medical rescue ship Nightingale receives a distress call from the Titan 37 mining colony. There the crew find a sole survivor, Troy Larson, son of the former lover of the ship’s chief medical officer. However, Larson has been mysteriously changed by an alien artifact that he brings aboard. This is found to contain ninth-dimensional matter capable of transforming ordinary matter in strange ways and of potentially even obliterating the entire universe. Once aboard the ship, Larson succeeds in stranding the pilot on the planet’s surface and then begins killing off the rest of the crew one by one.

Throughout the 1980s and 90s, Walter Hill was one of the better action directors out there. Walter Hill was doing it all before the current run of blockbuster action movies emerged on the scene – and naturally does it a lot better. Walter Hill’s body of films include the likes of The Driver (1978), The Warriors (1979), Southern Comfort (1981), 48 Hrs. (1982), Crossroads (1986), Red Heat (1988) and Last Man Standing (1996) and has never yet made a film that is less than interesting in one way or another. What many do not realise is that Hill was to originally have been the director of Alien (1979). Of course, back then Hill was a relative unknown and the project was handed over to Ridley Scott with Hill stepping back to producer status (something he has retained on all of the Alien sequels) with the rest being, as they say, history. It is for this reason that one looked forward to Supernova. Supernova offered not only the possibility of an Alien-inspired effort with an interesting director at the helm but also the possibility of a glimpse of what Alien may have emerged as under different circumstances.

Disappointingly, for the better part of a year out from its release, Supernova looked like it was shaping up to be a big disaster in the making. The press rippled with stories of director and studio clashes. Digital Domain was about to be purchased by MGM at the time and it was understood as part of the agreement that they would do the effects at cost – but the sale fell through and the sudden rise of costs forced the cutting of some more elaborate sequences. Walter Hill took his name from the film over the studio’s refusal to throw in the extra money to complete his vision of the film and when the trailer for Supernova went out in late 1999, it had the embarrassment of having the director listed as Alan Smithee, the generic Hollywood pseudonym for a disgruntled director. The pseudonym was changed to Thomas Lee just before the film’s release, with the Director’s Guild announcing the retirement of “Alan Smithee”.

To all reports, what emerges on screen was a salvage job, conducted under the aegis of Jack Sholder, the director of A Nightmare on Elm Street Part II: Freddy’s Revenge (1985) and The Hidden (1987). When one hears of love scenes between Peter Facinelli and Robin Tunney having been digitally re-edited and her skin colour changed so they can become love scenes between James Spader and Angela Bassett, Supernova looked like a big disaster where the studio was desperately trying to patch an unworkable jumble together and make something sellable out of it.

Reviewers are like paparazzi sometimes. They love to descend on the smell of a disaster like carrion and tear it to shreds. The same thing happened with the problem-ridden The Island of Dr Moreau (1996) – when it opened, Dr Moreau never had a chance to be seen without being reviewed against its backstage drama. However, just like Dr Moreau, Supernova sits on screen and stubbornly refuses to be as bad as everything about it would seem to indicate.

Certainly, the plot is far too reliant on Alien. Supernova makes numerous points of intersection with Alien – hypersleep sequences; a distress call from a planetoid that is not what it initially appears to be; an egg found on the planetoid which, when opened, starts infecting people and causing the deaths of the crew; an AI with a female personality whose inability to exceed narrowly prescribed programming parameters causes dire problems during emergencies.

On the plus side, while the set-up is derivative, with an A-budget behind it and a consistently interesting director at the helm (not to mention a story from William Malone, who directed the reasonable remake of House on Haunted Hill (1999) the same year and was the original director on this before being removed amid more studio clashes), Supernova emerges as considerably more promising than most Alien clones.

The opening, at least up until the arrival of the egg, is absorbing. The early scenes aboard the ship bustle with a sense of reality-eye authenticity. Care and attention has been placed into making the scientific doubletalk seem credible. Some of the effects sequences – the fall into the gravity well of the planetoid, James Spader’s landing on the surface and venture into the mine complex – are conducted with such a sense of verisimilitude that you could believe that you really are there. Walter Hill fluidly cruises in and around the dazzlingly detailed model of the spaceship as though it were there in space. Hill also films most of the dialogue scenes in tight tv-styled closeups and everyone speaks in deliberately hushed whispers, which serves to create an ambience of covert compulsiveness. And when the story starts to throw in such left-field twists as having captain Robert Forster transformed into a hypersleep-mutated living deformity, there is the sense that story is starting to go in strange, new and fascinating directions.

Alas, such never turns out to be the case. Soon after Peter Facinelli arrives aboard the ship, Supernova degenerates into standard Alien devices. It emerges as half-Alien, half-Dead Calm (1989) – Peter Facinelli even has the same high-cheekboned, squinty-eyed looks that Billy Zane, the psycho in Dead Calm, did. The initially absorbing atmosphere never builds to much – there is the suggestion that Robert Forster deliberately entered the hypersleep chamber knowing it was damaged but we never find out anything more about this.

While the science is detailed and believable, it still looks like science that has been used to justify a B-movie plot rather than a story that has decided to employ some of the mind-bending ideas that cutting edge science offers – the egg, despite talk of mathematically credible ninth dimensional matter, is still the science fictional equivalent of a Hitchcockian McGuffin, a little black box that has no purpose other than to unleash the monster and threaten to destroy the universe.

Most disappointingly, the Alien-modelled scenes stalking crewmembers never amount to a great deal. Walter Hill, who is capable of creating top-notch action sequences, does little with the stalk-and-chase sequences – one tends to think, on the basis of this, that had Hill ended up directing Alien, it would never have been the classic that it is. The one moment of novelty is a sequence where the engineer tries to reprogram the shipboard AI to ignore its safety features against harming humans in order to defend him as Peter Facinelli tries to break through a window after him.

Facinelli’s performance alternates between handsomely seductive and campy one-liner spouting villainy, while all the digital body transformations are tiresomely taken from a well-worn arsenal of stock Hollywood pop-up effects. Supernova is a disappointingly ordinary panning out of what seemed like a promising film.

Walter Hill’s other forays into genre film-making are:– Southern Comfort (1981) about a troupe of soldiers being hunted in the bayous by Cajuns; the blues music film Crossroads (1986) about an aging musician who has sold his soul to the Devil; and The Assignment (2016) about a hitman seeking revenge after gender reassignment surgery was forced onto him. Hill was also to have been the original director of Alien (1979) before being replaced by Ridley Scott, with he retaining only producer credit on the film, plus all of the sequels. Hill was also executive producer on the Tales from the Crypt (1989-96) anthology tv series.