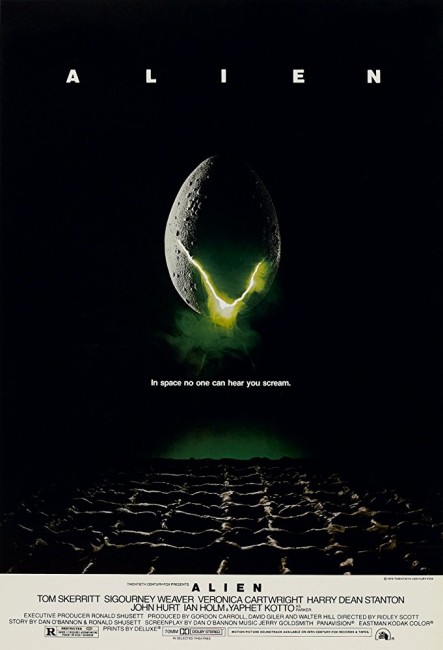 On their return journey to Earth, the crew of the ore-carrying space-tug Nostromo are woken from cryogenic sleep by a distress call emanating from a barren planetoid. Landing, they investigate the dead hulk of an alien spaceship. However, when translated, the distress call is found not to be an SOS but a warning. While exploring the alien ship, one of the crew is infected by an organism that penetrates his space helmet and attaches itself to his face. The organism uses his body to gestate into a larger predatory form that explodes out of his stomach. The alien then vanishes into the Nostromo’s corridors where it waits in the dark to prey on the rest of them.

At heart, Alien is only a rehash of 1950s films like The Thing from Another World (1951), The Quatermass Xperiment/The Creeping Unknown (1955), Planet of the Vampires (1965), Queen of Blood (1966), and in particular It! The Terror from Beyond Space (1958) and the Doctor Who episode The Ark in Space (1974), which it bears a great deal in common with. Indeed, the story is so generically drawn that science-fiction writer A.E. Van Vogt apparently reached an out-of-court settlement with the producers, claiming that they had stolen the idea from his short story Black Destroyer (1939), which is contained in his collection Voyage of the Space Beagle (1950).

However, Alien is a very different film to its 1950s predecessors. The usual clean, crewcut astronauts-come-GI’s of 1950s films have been substituted for a troupe of bickering, hard-assed blue collar-types who are constantly bitching about their pay. That said, the plot never does much more than set them up for much more than the usual “Excuse me while I go into this dark room alone,” characterisations. Nevertheless, the film managed to assemble a cast of top-class performers, including a surprising number of emergent stars before they became well-known – John Hurt, Ian Holm, Tom Skerritt (one of the most under-rated American actors) and, in her film debut, Sigourney Weaver (who would forever become associated with the role of Ripley). While John Hurt remains uncharacteristically unused and Veronica Cartwright seems, for such tough characters, cut in the role of neurotic screamer, Ian Holm, Yaphet Kotto, Harry Dean Stanton and, in particular, Sigourney Weaver give very good performances.

What makes Alien work more than anything is the direction of Ridley Scott. Alien was Ridley Scott’s second film. He had previously made some 2000 commercials and then the excellent but little-seen Napoleonic drama The Duellists (1977). Scott is a master of dusky, moodily lit chiaroscuro. Alien alternates between eerie suspense and graphic gutsy horror. It is certainly one of the finest sustained horror films of the 1970s – the moment that the alien erupts out of John Hurt’s chest at the dinner-table is a genuine shock that continues to hold graphic impact on repeated viewings. The scenes with the alien stalking the crew through the dank, dripping corridors and into the shuttle keep the entire audience on the edge of their seats.

Ridley Scott assembled a team of conceptual artists taken from the pages of Heavy Metal magazine – including Ron Cobb and Jean Giraud – who laboured for months to create the dirty rundown machinery look of the spaceship. The pristine technologism that dominated interstellar interior decoration since 2001: A Space Odyssey (1968) gave way to a raw grittier view, with the ship being designed as all dark corridors and exposed, dripping conduits. Ridley Scott loves this textural bombardment and the ship’s look is one of the most exciting works of junk fetishism to grace the postmodern science-fiction movement. The look was influential – after Alien, the design schema of interstellar travel forever left behind the 2001 look of clean, white antiscepticism where technology would triumph over humanity, and took place in a gritty, rundown world inhabited by working stiffs.

Most important to the design scheme of the film was the sleek, skeletal ebony shape of the alien. Before the look was copied by dozens of imitators, the alien was one of cinema’s most unearthly creations. Ridley Scott keeps the alien even more mysterious by keeping it hidden in shadow or only subliminally glimpsed in flashing lights. The design of the alien came from Swiss surrealist H.R. Giger whose work constantly fuses sexuality, technology and the occult in ways that are disturbing. Giger’s designs give Alien a weird Freudian subtext. (I mean, what else could one make of a film with a petulant computer called Mother?) A dark sexual undertow lies beneath the surface of the film. The alien’s last two forms seem to be designed like ambulatory phalli. When one gets a glimpse of the face-hugger it almost appears to be performing fellatio on John Hurt, after which he ‘gives birth’. The ship where he is ‘fertilized’ by the initial egg is shaped like a pair of open thighs that are littered with vagina-shaped entrances. Indeed, as opposed to the aliens that inhabited the warm, open-armed universe of Steven Spielberg’s contemporary work, Alien demonstrates the concept of the alien as interstellar rapist. In the original script, the alien used the bodies of its human victims to lay eggs in but this scene was cut for the purpose of pacing (a scene that was eventually restored for the 25th Anniversary Special Edition dvd release in 2004). This excision unwittingly gives us a much more sinister implication of why the alien hunts – it seems to demonstrate a preference for the female crew-members, leaving them until last. In one scene near the end, it deliberately waits, seeming to ogle Sigourney Weaver as she undresses before emerging from its hiding place, and the last thing we ever seeing of Veronica Cartwright is its tail sinuously disappearing up between her legs.

Alien comes in direct contrast to the films of Steven Spielberg who was beginning his own subgenre of warm fuzzy aliens around the same time. Where Spielberg’s Close Encounters of the Third Kind (1977), E.T.– The Extra-Terrestrial (1982) and their imitators never ventured beyond the realms of middle-class suburbia and where the alien in these came to fulfill lost childhoods or stand in for missing parents; Alien and its body of imitators featured working class protagonists caught in grim to-the-death struggles with wholly hostile aliens. Both views of interstellar contact are diametrically opposed – the middle-class E.T. greets the universe with opens arms, the distinctly working class Alien views the universe as inherently hostile – and they seem to unconsciously mirror the increasing class divides that were emerging within the USA at the time.

Alien was so popular it has been sequelized five times. Two of the sequels – James Cameron’s Aliens (1986) and David Fincher’s Alien3 (1992) – are excellent, while the subsequent entries – Alien: Resurrection (1997), AVP: Alien vs. Predator (2004) and AVPR: Aliens vs Predator Requiem (2007), the latter two of which are crossover with the Predator franchise – less so. Ridley Scott later returned to conduct two prequels to Alien with Prometheus (2012) and Alien: Covenant (2017). The film has also been parodied in the likes of The Creature Wasn’t Nice/Spaceship (1981), Bloodbath at the House of Death (1984), The Ice Pirates (1984), Spaceballs (1987), The Haunted World of El Superbeasto (2009) and Planet 51 (2009). The making of Alien was extensively discussed in The Alien Saga (2002), a documentary about the film series.