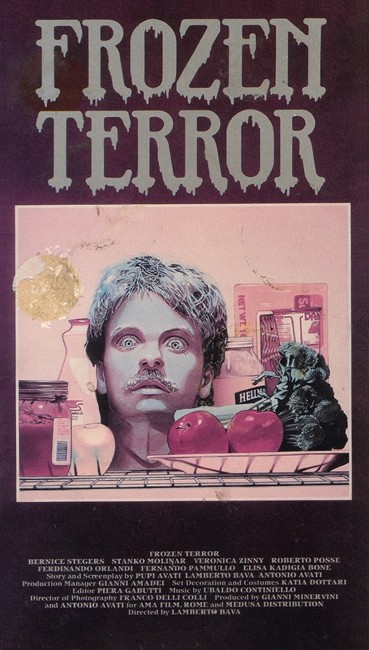 Housewife Jane Baker abandons her two children to move in with her lover Fred Kelleman. Acting in spite, her teenage daughter Lucy makes taunting phone calls and then drowns her brother in the bath. As Jane rushes home, she and Fred are caught in a car crash and he is decapitated. One year later, Jane is released from a mental hospital and moves into an apartment upstairs from the blind Robert Duval. Robert develops a crush on her and becomes obsessed with finding out who the mystery man she spends all her time making love to is. Sneaking into the apartment, Robert makes the shock discovery that she keeps Fred’s severed head in the icebox.

Macabre, mostly known in English-speaking countries as Frozen Terror, was the directorial debut of Lamberto Bava. Lamberto is the son of the great Mario Bava, an Italian genre legend known for classics like Black Sunday (1960), Black Sabbath (1963) and Danger: Diabolik (1968). The younger Bava went on to carve out a niche as a routine-to-competent genre director, most notably with Demons (1985), although has so far failed to come up with anything to match his father’s genre record. (See below for Lamberto Bava’s other films).

Macabre/Frozen Terror is an unassuming little film. It could almost be an episode of The Twilight Zone (1959-63) – or perhaps more appropriately an episode of one of the non-fantastic anthology series of the same era such as Alfred Hitchcock Presents (1955-62) or Thriller (1960-2) – spun out to feature length. The story is a one-twist tale – everything depends on the revelation of its central surprise, the film has not been designed with a second act. At times, it does seem padded but for the most part Lamberto Bava does a fine job of building the mystery up about who it is that Bernice Stegers spends all her time fucking in the upstairs apartment and exactly what it is that she keeps locked in the icebox.

Of course, the claim made by the publicity that Macabre/Frozen Terror is based on a true story is pure nonsense. The telling of the story in terms of the horror and suspense genres tends to mitigate against its believability – the plot devices of the genre seem too artificial for real life. Moreover, the twist ending where the severed head comes to life and turns and bites Stanko Molnar makes such claims seem ever more ludicrous, not to mention spoils a good deal of the mood build-up by going for a sensationalistic shock effect. The film goes on location in New Orleans and the city’s individualistic architecture looks great – although this does also require the entire cast to affect horrendous Southern accents.

Macabre is not related and should not be confused with the William Castle psycho-thriller Macabre (1958).