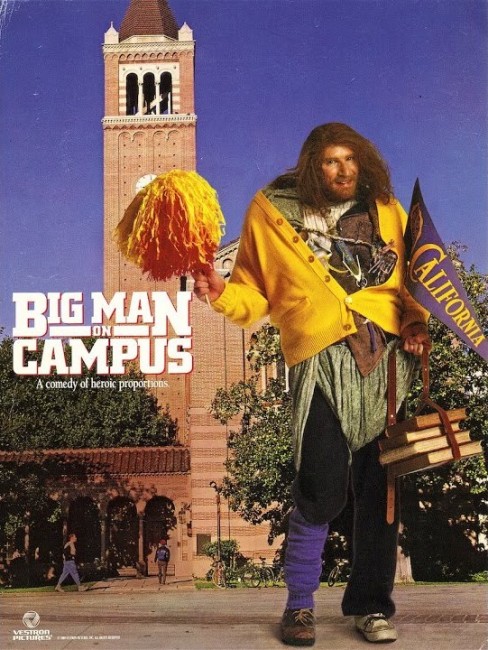 aka Hunchback Hairball of L.A.

A scruffy hunchback is discovered living in the campus bell tower. A court battles ensues between rival psychologists as to whether it is an animal or intelligent – which the hunchback settles by talking to the judge. The hunchback Bob is placed into the care of student Alex Kaminsky. However, Bob’s unruly behaviour proceeds to throw Alex’s personal life into chaos.

With Big Man on Campus, The Hunchback of Notre Dame became another in a series of classic genre themes to get a hip updating. The result is a quirkily likeable item. (Although one would have thought the film would be on the ball enough to try and set itself at Notre Dame University).

The comedy in the film is predictable – the plot never consists of anything but gag situations concerning big, lugubrious Allan Katz’s unsocialised chaos. Allan Katz (who is also the film’s scriptwriter)’s gruff grunts and ungainly amiability eventually becomes endearing. As his intelligence increases, so too does the sophistication of the film’s humour.

The rest of the veteran cast – including Jessica Harper; Cindy Williams, who has a charming scene being seduced by Allan Katz; and Tom Skerritt, one of the most warmly likeable and underrated actors in the American industry today – are all excellent. The one performance that does grate is Corey Parker whose constant barrage of self-effacing one-liners gets up one’s nose.

On the whole, Big Man on Campus is a whole lot more sweetly charming a film than anything it might otherwise give reason to assume. Certainly, it is a good deal better than the similar Encino Man/California Man (1992), which ventured through similar territories.

There was a subsequent French-made Hunchback of Notre Dame parody with Quasimodo d’El Paris (1999).