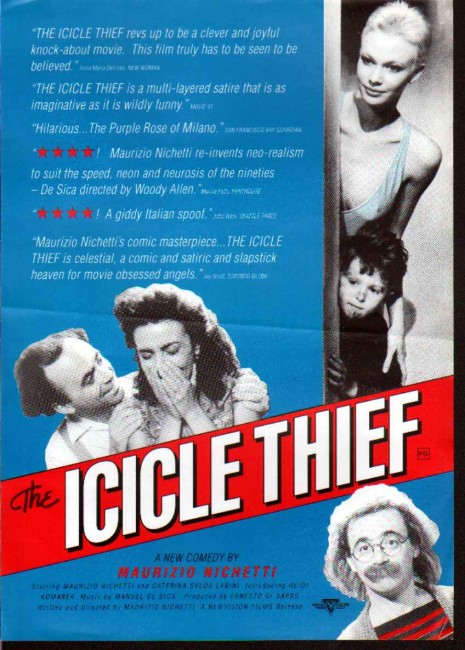 ‘The Icicle Thief’, a film made by director Maurizio Nichetti that is a modern homage to the school of classic Italian neo-realist cinema, is screening on Italian television. In the studio for an interview, Nichetti feels frustrated as the broadcast is constantly being interrupted by commercials. Soon the characters in the film and the commercials begin to intermingle. The film’s plot becomes a shambles as a model falls through into the film and is taken home by the hero. Meanwhile, the hero’s wife, thinking he is having an affair, falls through in the world of commercials. Director/star Nichetti then enters the broadcast to straighten things out but ends up causing further chaos.

The Icicle Thief has been constructed as a parody-come-homage to both its namesake, Vittorio de Sica’s The Bicycle Thief/Ladri di Biciclette (1949) and the school of Italian neo-realism that gave birth to it. The opening with the tv critic stumbling to describe a film he has not seen is a perfectly on-target parody of the very school of criticism that leant these definitions to the movement. (Although the film is clearly aimed for the English-speaking market – the play on titles between The Icicle Thief and The Bicycle Thief is far clearer in English than it is between the original Italian titles).

The Bicycle Thief is beautifully reproduced in a lengthy preamble as it is screened on tv (with ad breaks included). Here director Maurizio Nichetti does a superb job of reconstructing the gauzy black-and-white photography of Italian classic cinema, the shabby realism of the sets and costumes, the mawkish earnestness and even the gentle humour – the baby that dallies with danger with every move it makes while unnoticed by anybody else – and without a hint of parody until Nichetti playing himself enters the scene.

The parody has a delicious wit. The moment Maurizio Nichetti attempts to explain to young Federico Rizzo how he should have made the bicycle into a wheelchair for his father, how their mother should be forced to go into prostitution to support the children and that they will end up in an orphanage barely able to contain his own appreciation of what a cinematically beautiful moment it will be, in the telling, is witty, all the more so for Rizzo’s later throwaway line, “You put your own children in an orphanage.” The ironies come appealingly – “Next time I’ll include a closeup of the street name,” says a frustrated Nichetti as he wanders through the film trying to find where the apartment is.

Stylistically, The Icicle Thief is superlative – the perfectly constructed commercials that Nichetti and Federico Rizzo invade is excellent, while the entrance of the colourised Heidi Komarek into the black-and-white landscape, rubbed down into black-and-white by Nichetti’s coat, is presented with an admirable lack of ostentatious flashiness.

The Icicle Thief makes for easy comparison to Woody Allen’s The Purple Rose of Cairo (1985). It is a comparison that should not be lost for Maurizio Nichetti also sees himself as a writer-director-actor auteur and his humour aims for exactly the same embarrassed self-effacement that Woody Allen does. Nichetti started out as a mime artist and then wrote the script for and starred in the Disney spoof Allegro Non Troppo (1976).

Maurizio Nichetti’s other writer-director-starring efforts include the genre likes of Ratataplan (1979), a farcical slapstick comedy in which Nichetti plays an inventor who achieves social success when he builds an android double of himself; Tomorrow We Dance (1982), which set the characters from Melies’s A Trip to the Moon (1902) loose on modern society as aliens that cause people to start compulsively dancing; Volere Volare (1991) in which Nichetti plays a character who finds he is becoming a cartoon; Stefano Quantestorie (1993) wherein alternate versions of himself intersect; the children’s film Snowball (1995); and Luna e l’Altra (Moon and the Other) (1996) where a woman’s shadow takes on a life of its own.