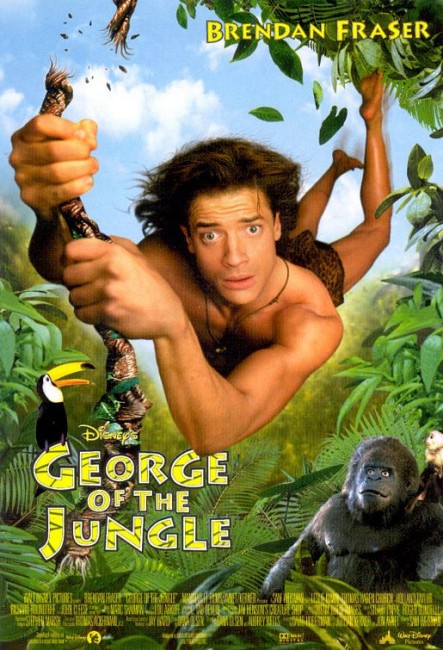 Heiress Ursula Stanhope is holidaying in the Bakuvu jungle when her self-important fiancé Lyle van der Groot unexpectedly joins her. Together they head up Ape Mountain in search of a white ape that is reported to live there. They are attacked by a lion but then a man in a loincloth suddenly appears and wrestles the lion into submission. The ape-man George takes the unconscious Ursula to his treehut. There George’s talking ape companion tries to educate him in the ways of courtship to woo Ursula. She starts to succumb to the charms of George’s gauche clumsiness. Meanwhile, Lyle tries to lead a party of trackers to kill George. Ursula flees back to San Francisco with George but there faces the difficulty of persuading her mother that she now wants to marry George instead of Lyle.

The original George of the Jungle (1967-70) was an animated show produced by Jay Ward, who was also responsible for The Rocky and Bullwinkle Show (1961-73) and The Dudley Do-Right Show (1969-70). Though the series is listed as having aired on tv for three years, only a total of seventeen half-hour episodes were ever made. George of the Jungle was essentially construed as a parody of Tarzan where the hero was a dimwit who slammed into trees every time he swung on a vine and had an ape companion that was more intelligent than he was.

There are some extremely good creature effects, which make the animals behave in cartoon-like ways yet retain believability that they are still animals. Indeed, the scenes with the animals are some of the funniest in the film – Shep the elephant that thinks he is a dog and plays fetch with tree trunks, bounding about like an eager puppy or chewing giant dog biscuits; the ape named Ape (who comes with the perfectly droll voice of John Cleese) who has to behave like a normal ape lest Leslie Mann faint and at the fadeout is seen performing Frank Sinatra impressions in a Las Vegas lounge act; the wonderfully puzzled expressions on the face of the lion. Similarly, Brendan Fraser presents an endearingly likeable series of goofy facial expressions, before the whole Brendan Fraser goofball thing started to become tiresome.

The film is very faithful to the tv series, with many of the gags having being transplanted direct. The humour is enjoyable, although maybe the gag about George slamming into trees as he swings on a vine verges on being overplayed. The film gets considerable amusement out of parodying its own deliberate unreality. A character falls from a rope bridge but not to worry, the narrator tells us, nobody dies in this film. The narrator, who is a perfect imitation of the didactic narrator voices in 1950s films, is played for a great deal of humour – at one point, the on-screen characters disagree with what the narrator says and the voice erupts in thundering God-like tones in full THX surround-sound to rail at them for daring to do so.

Certainly, the plot is predictable, rehashing the basics of Tarzan movies – girl discovers and is taken by an ape man to the chagrin of her controlling fiancé; the ape man is brought back to civilization where he proves amusing but ultimately does not fit in; the heroine is given to stand up against her conservative parents; and with the villainous trappers foiled in the last reel.

George of the Jungle 2 (2003) was a video-released sequel with the roles of George and Ursula recast with Christopher Showerman and Julie Benz. This featured return performances from Thomas Haden Church as Ursula’s fianc&eacute and John Cleese as the voice of the Ape Named Ape.