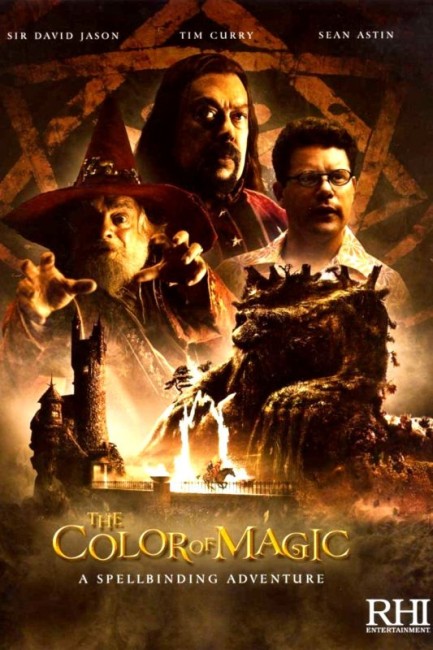 The wizard Rincewind is evicted from the Unseen University because he has not managed to learn a single spell in forty years of study. On the streets, Rincewind befriends Twoflower, the Discworld’s first tourist, who has just arrived in Ankh-Morpork accompanied by his Luggage, an animate trunk made of sapient pearwood. Because gold is plentiful supply in the Agatean Empire where Twoflower hails from, he freely hands it out, which makes him the target of every thief and blackguard in Ankh-Morpork. The Patrician gives Rincewind orders to accompany Twoflower and see he remains alive in order to keep peace with the Agatean Empire. Rincewind and Twoflower pass through a series of adventures as they head across the Disc. These include visiting the Wyrmberg where the dragons live and accidentally being launched in a capsule over the edge of the Disc by a group of astronomers wanting to investigate the sex of A’Tuin, the turtle on whose back the Discworld is perched, as well as falling into the company of the legendary hero Cohen the Barbarian. Meanwhile, at the Unseen University, the wizard Trymon starts killing all that stand in his way to inheriting the title of Arch-Chancellor. The most powerful book of magic, The Octavo, has become restless. Trymon learns that one of the spells became lodged in Rincewind’s head after reading it as a young student – it being so powerful that all other spells were too afraid to join it, meaning that Rincewind has been unable to learn anything. As A’Tuin changes direction and starts heading towards a red star in the sky, Trymon seeks to reunite all the spells of The Octavo to become the most powerful wizard – but this means having to kill Rincewind to obtain the eighth spell.

Up until his death in 2015, Terry Pratchett was one of the most popular fantasy writers in the world. Pratchett has at current count put out over 50 books. Forty-one of these existed in the universe he called the Discworld, a flat disc-like planet that sits atop four elephants that stand on the back of a turtle. Pratchett has construed Discworld as a parody of various fantasy tropes, characters and stories. In this world, he has created an expanding line-up of continuing characters that weave in and out of the various books, many having become fan favourites. Terry Pratchett’s success has naturally attracted some media attention. There have been several adaptations of his books for British television, the first being the Claymation animated Truckers (1992) from Thames Television, a charming six-part children’s series about a group of gnomes that live in a department store; Johnny and the Dead (1995) and Johnny and the Bomb (2006), two BBC mini-series about a boy who can see the dead; and two previous animated Discworld tv series adaptations, Soul Music (1997) and Wyrd Sisters (1997). Subsequently, there was also the long-planned tv mini-series adaptation of Pratchett’s non-Discworld novel Good Omens (2019) and a further Discworld adaptation from the BBC with The Watch (2020).

The most high-profile of these was Vadim Jean’s tv mini-series adaptation of Hogfather (2006) for The Mob Film Co and RHI Entertainment. Terry Pratchett oversaw the script, taking the amusingly nebulous role of ‘Mucked About by Terry Pratchett’ (which he retains here). The Colour of Magic was the second of Vadim Jean, The Mob and RHI’s Terry Pratchett adaptations. Most of those concerned returned with Going Postal (2010). (Pratchett can be seen in the role of one of the astronomers at the very start and end of the show – indeed, he is the one that says the closing line).

The Colour of Magic is adapted from not one but two Terry Pratchett books, The Colour of Magic (1983) and The Light Fantastic (1986), which were the first two Discworld novels published. Vadim Jean and Pratchett trim some aspects of the books – the visit to Bel-Shamharoth, which was intended as a parody of H.P. Lovecraft; the meeting with Death’s daughter; the visit to the mysterious shop in The Light Fantastic; and the venture into the Dungeon Dimensions – and expand other aspects such as Trymon’s schemings in order to draw the two books out into a single narrative. One surprise is the elimination of all mention of octarine, which means that the title ‘the colour of magic’ now does not make sense.

It does not make any difference what order one reads the Discworld books in – though the characters weave in and out of different stories, they can all be read independent of each other. (For instance, though Hogfather was filmed first, the Librarian is a fully developed orangutan there, whereas we only see his transformation from a human here). On the other hand, it was puzzling seeing Hogfather as first choice of these Terry Pratchett tv adaptations. It makes more sense doing The Colour of Magic and The Light Fantastic first as these are the earliest of Pratchett’s books. By the time of Hogfather (1996), which was Prachett’s twentieth book, his writing had become a good deal more sophisticated. Indeed, by the time of Hogfather, Pratchett seemed to be about the point that Woody Allen was in the early 1980s and seeking something that lay beyond writing jokes and gags. Though containing a requisite number of gags, Hogfather was a much more serious Terry Pratchett book and contained some interesting speculations about myth with Pratchett trying to create a pagan alternative to Christmas and Santa Claus. In its sophisticated swing of ideas, Hogfather was certainly a challenging work to bring to the screen as the first of a series of Pratchett adaptations. By comparison, The Colour of Magic and The Light Fantastic are much more knockabout Pratchett works where the emphasis is on lightly spoofing a number of fantasy conventions and nothing deeper than that.

Pratchett makes digs at various fantasy cliches. The Wyrmberg scenes, which never quite come to life as they should, were intended by Pratchett as a spoof of Anne McCaffrey’s Dragonriders of Pern books. There are parodies of magic swords and a virgin sacrifice who proves less than grateful after being sacrificed from her intended fate. Cohen the Barbarian, an aging warrior who struggles on despite suffering from arthritis and losing his teeth, is clearly construed as a parody of Conan the Barbarian. (There is an amusing parody of the famous line from the Conan the Barbarian (1982) film where Cohen is asked: “What is good in life?” to reply “Good dentistry. Soft lavatory paper”).

That said, surprisingly few of Terry Pratchett’s numerous puns appear in the script – the odd one with Sean Astin making lines about (literally) returning from Death’s door or with Death noting “I’ve had another near-Rincewind experience.” Most notedly, the mini-series has (for logical reasons) been excised of the extensive joke footnotes that appear throughout Pratchett’s books, something that Pratchett elevated to an art form.

The Colour of Magic is undeniably uneven. Vadim Jean throws up a number of funny scenes – particularly during Sean Astin’s arrival in Ankh-Morpork and at the Broken Drum. On the other hand, a number of other scenes drag somewhat – Tim Curry’s various schemings around the Unseen University go on longer than they need to, while David Jason’s encounter with a talking magic sword is never particularly funny. Some scenes like Rincewind and Twoflower’s arrival in the land of Krull and ending up as the chelonauts feel like they never get enough screen time. This makes interesting contrast to Hogather – where Hogfather seemed packed to the gills with more ideas and things going on than it could handle, The Colour of Magic, though it is based on two books, seems much looser and more laidback, even at times padded.

One major plus about The Colour of Magic is that it has been made with a lavish budget – clearly a much bigger one that Hogfather had available to it. It shows up in a much more expensive and expansive look. There are some very nice, richly detailed sets. The effects team do a sterling job in coming to the party, creating some magnificent dragon and troll effects. The most magical scene is the climactic moments where we see the baby turtles with elephants and discworlds on their back too being birthed from the suns and one of them coming up to rub nose with A’Tuin. It is a scene that holds a beautiful sense-of-wonder magic.

David Jason, a long staple of British comedy, does a reliable comic turn as the likeably cowardly Rincewind. (David Jason also appeared in Hogfather where he confusingly played the similar but entirely different character of Death’s assistant Albert. Nigel Planer, who played a wizard in Hogfather, also plays the different character of an astronomer here). The Colour of Magic also features the ultra-annoying Sean Astin – indeed, he gets the headline position on the cast list even above David Jason who plays the central role of Rincewind. Up until he appeared as Samwise Gamgee in The Lord of the Rings, Astin was just another has-been teen actor trying to make a living for whom the latter half of the 1990s had been fairly much a dead zone. Lord of the Rings proved a major boost to Astin’s profile and he has not been slow to exploit it, taking roles in a host of other fantasy works that have attempted to use him as a touchstone to reach the same audience. (When it comes to the Lord of the Rings castings, there is also Christopher Lee who inherits the role of Death from the late Ian Richardson). Jeremy Irons does a surprise turn as the Patrician and steals the show with a wonderfully subdued sense of almost absent-minded menace in his two scenes on screen.