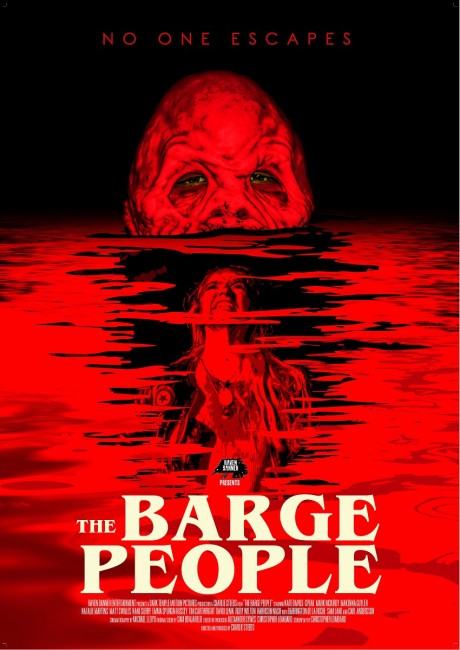 Mark and his girlfriend Kat hire a barge for the weekend to take a trip along the Kennet and Avon Canal in the South of England. They are joined by Kat’s sister Sophie and Sophie’s new boyfriend Ben, a yuppie who hates being there. When Ben takes the turn at the tiller, he scrapes another barge as they pass and hurls insults at the people aboard. At they visit a canalside pub ashore that evening, Ricky and his girlfriend Jade, the people from the barge they scraped, try to start a fight with them over the incident before they are thrown out. Later Ricky and Jade break into the barge and make the group prisoner. This is turned on its head as they are then attacked by mutant creatures from out of the canal. As their numbers are slaughtered by the creatures, the survivors of the two parties are forced to cooperate to survive.

A couple of years ago, I reviewed Deadman Apocalypse (2016), a post-holocaust film made by British newcomer Charlie Steeds. It was a painfully bad film. Steeds has since gone on to a busy output of other low-budget horror films with the likes of Escape from Cannibal Farm (2017), The House of Violent Desires (2018), Winterskin (2018), An American Werewolf in England (2020), Death Ranch (2020), An English Haunting (2020) and Vampire Virus (2020).

Watching The Barge People after Deadman Apocalypse, I had no high expectations of it but ended up being pleasantly surprised. The film has been compared to The Hills Have Eyes (1977), although the comparison makes more sense if you are talking about the remake The Hills Have Eyes (2006). Steeds does a clever job in adapting the Backwoods Brutality film to rural England, setting the story around the backwater canals on barge boats rather than the Appalachian backwoods or Texas noweher towns. Steeds has a particularly picturesque eye for the locations (which are real canals in the South of England).

There is the usual rivalry between backwoods hicks and city folk with Matt Swales playing a particularly obnoxious yuppie character. The film even seems to make the rivalry into one between different regions of England with the contretemps in the bar throwing insults about people being ‘scousers’ (Liverpudlians) and Bristolians. The usual hillbillies and in-bred rednecks we get have been replaced by what appear to be mutants. (The film is not exactly clear what the creatures are – at one point, they are said to be in-bred, while the non-human appearance, the film’s alternate title Mutant River and the backdrop of a toxically poisoned canal suggests mutations).

The film starts off particularly well with the idyllic trip down the canals going awry after they scrape against another barge, which nearly erupts into a fight in a bar. The barge people, who are portrayed as rural and uncouth, later return and invade the group’s barge, tying the two couples up and menacing them. This is a standard Backwoods Brutality set-up. However, the spin that is then put on things is that the attack is interrupted as one of the mutant creatures enters the boat and starts devouring one of the party. This erupts into a furious fight where those remaining are suddenly forced to cooperate with people that minutes before had been their captors in order to survive.

The film gets two good acts out of the material. The latter sections become fairly standard Backwoods Brutality scenes running around pursued by the mutant fish creatures. There are various pursuits, recaptures, a fall into a pit, a twist thrown on things just when people think they have gotten to safety. It is not quite as absorbing and intense as the early sections are and falls into much of a muchness. Nevertheless, it shows promising things for Charlie Steeds.