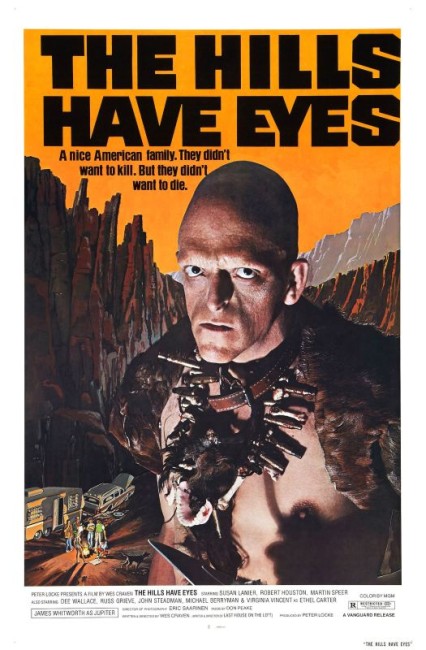 Retired policeman Bob Carter, his wife, their two daughters and their respective husbands drive out into the Arizona desert to visit the silver mine that Bob has inherited. They are swooped over by Air Force jets, which cause them to drive off the road and break the axle of their campervan. As night closes in, they become the prey of a family of cannibals living in the hills.

Wes Craven made a strong directorial debut with the notoriously violent revenge film The Last House on the Left (1972). The Hills Have Eyes was his follow-up and is a clear effort to make another Last House. With The Hills Have Eyes, Wes Craven has a better budget at hand. He transplants the milieu from upstate New York to the Arizona desert but the story is essentially the same – that of a group of wild killers preying upon a group of innocents and the same reversal wherein the family are reduced to barbarism as they exact a nasty revenge on their attackers.

That said, The Hills Have Eyes remains a little too much in the shadow of either The Last House on the Left or The Texas Chain Saw Massacre. It lacks the sheer savagery of Last House‘s revenge scenes or the wild all-out intensity of The Texas Chain Saw Massacre. Wes Craven certainly generates a reasonable tension, agoraphobically constricting the film to a single stretch of road. However, the film loses atmosphere when it gets to the scenes with the family fighting back and it changes its nature from a primal attack film into more of an action piece. It becomes repetitive in all the runnings from Point A to Point B and back again.

Moreover, the family’s descent into barbarism and the savagery of their revenge is a much more muted theme than it was in The Last House on the Left. There is certainly the sense of a conservative family – the father is a harsh authoritarian, a traditional Christian and a racist – being brutalised and torn apart, and some nastiness – people being dragged along attached to the wheels of a car, being blown up inside the campervan, and the final freeze-frame on a stabbing. On the other hand, The Hills Have Eyes lacks the vicious irony of Last House‘s ending where the justice exacted by the family became more vicious than the original attacks.

The Hills Have Eyes was also notable for introducing to screens the bald-headed Michael Berryman who has since lent his bizarre presence to a number of genre films. The most notable name to emerge from the cast was Dee Wallace who would later go onto roles in The Howling (1981), Critters (1986) and of course as the mom in E.T. – The Extra-Terrestrial (1982).