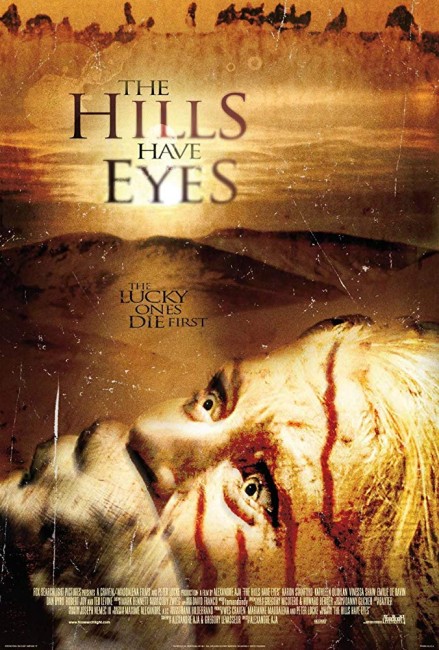 Bob and Ethel Carter are travelling through the New Mexico desert in a caravan with their three children Lin, Brenda and Bobby, as well as Lin’s partner Doug and their young baby. A gas station attendant directs them to a shortcut – but several miles along the road they drive over a spiked trap that pierces their tires and causes them to crash. As Bob and Doug start walking to find help, the others find themselves prey to a group of wild people living in the hills. The hill people abduct the baby and set Bob’s crucified body afire. As the clash erupts into a brutal battle for survival, the family find that the hill people are the mutated survivors of miners who refused to leave the area during the atomic tests of the 1950s.

Wes Craven managed to get ahead of the trend by overseeing this The Hills Have Eyes remake himself. To conduct the task, Craven chose French director Alexandre Aja who had made a splash with his second feature, the gore-drenched High Tension (2003).

Alexandre Aja co-writes with his regular art director Gregory Levasseur. They are faithful to the original The Hills Have Eyes and follow it on most points. However, Aja and Levasseur also expand out upon the basics of The Hills Have Eyes in some interesting ways. The most fascinating aspect is where the original minor plot point about the family heading out to find a uranium mine has now been elaborated into an entire theme about the hill people being a family of mutants that survived the original New Mexico A-bomb tests of the 1950s. In fact, the remake now moves away from the basics of The Hills Have Eyes and at times almost comes to resemble Death Line/Raw Meat (1972), which was about a group of survivors living in a tunnel after a 19th Century cave-in and coming up to the surface to prey upon the present-day people who live unaware of their existence.

The Hills Have Eyes now has an entire subtext about America’s repressed past emerging to devour itself – the credits play over a mix of footage from the 1950s A-bomb tests, while elsewhere there is footage from a documentary about Agent Orange. When we go visit the mutant’s lair, we see a desolate desert town filled with mannequins, antiquated 1950s-styled decor and where a mutant with a giant brain sits watching Divorce Court (1999– ). The effect is just like it was in The Texas Chainsaw Massacre 2 (1986) where we went from the Backwoods Brutality setting of the original film into a realm that was a bizarre hyper-real parody of American culture. Like Texas Chainsaw 2, The Hills Have Eyes 2006 also opts into the view that America’s dirty warlike past has bred a world in the present where such madness seems a natural outgrowth.

The Hills Have Eyes 2006 is also clearly a version of the Backwoods Brutality cycle that has been updated to the 00s. While the original Backwoods Brutality cycle took place in the outlands of America where there were still hillbillies, here the limits of civilisation are defined as the places where cellphone coverage extend to. It is also ironic to see how Alexandre Aja and Gregory Levasseur retain the characters that Wes Craven had in the original The Hills Have Eyes – the family where the conservative parents sit across a tense rift from their liberal children. Here, Aja and Levasseur manage to redefine the familial split along the lines of the huge political divide between Republicans and Democrats that runs evenly down modern America.

The parents are clearly hardline conservatives, while Aaron Stanford’s hero (a much more clearly defined character than in the original) is a standard liberal. Indeed, Aaron Stanford’s character arc is almost identical to Dustin Hoffman’s character in Straw Dogs (1971), which was the progenitor of the Backwoods Brutality cycle – a bespectacled liberal who must give up his fanciful pacifism and engage in bloody to-the-death hand-to-hand combat (and moreover to adopt the clearly pro-NRA line that his father-in-law Ted Levine supports). The other great irony is the point where Alexandre Aja throws in a line about parents Ted Levine and Kathleen Quinlan being former hippies. You can clearly see that the flower children whose innocence Wes Craven showed savagely being torn apart in The Last House on the Left have grown up to become the modern conservatives – the very people that Craven railed against in The Hills Have Eyes 1977.

Alexandre Aja directs with a commendable gore-drenched brutality. In fact, this Hills Have Eyes is much more brutal and savage in its fight to the death than the original film was. The film also has an interesting ambient score from tomandandy.