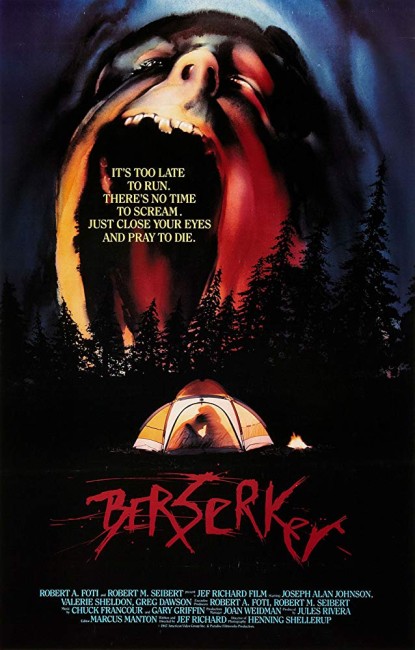 Three guys and their girlfriends go on a camping trip to Rainbow Valley. The bookish Larry reads how the area was once settled by Vikings in the 10th Century and how the spirits of Berserkers are reputed to haunt the area. As they settle into their cabin, something emerges out of the woods and starts killing members of the group.

Berserker: The Nordic Curse is a low-budget 1980s video release that was shot in Utah. Berserker was the second and to date last directorial outing of Jef Richard who has subsequently maintained a career as a second unit director and producer of various films. Richard’s one other film as director was the family wilderness adventure In Search of a Golden Sky (1984).

There is the clear influence of The Evil Dead (1981) on Berserker: The Nordic Curse – a group of friends in their teens/early twenties go into the backwoods for a weekend and are attacked by something supernatural that emerges from the woods. Alas, Berserker is a cheap and routine copy on almost all counts. There is a standard line-up of slasher movie victims. Jef Richard Richard’s pacing is slow although he does have an occasional sense of mise-en-scene that is not too bad – one scene where the group are pulled over by a police officer (John Goff) and their tone of jerkishness suddenly dissipates into meekness in the face of authority, or the chessgame between George ‘Buck’ Flower’s Pappy and the sheriff. Here Richard seems on the verge of making something that is character driven rather than a standard slasher film.

That said, Berserker becomes far less interesting once it moves over into horror. There is a certain tackiness to one scene Jef Richard throws in with Shannon Engemann being slaughtered, which comes intercut with Beth Toussaint and Rodney Montague having sex nearby and the moans of her orgasms blending in with Engemann’s screams. There are some not very convincing gore scenes and a creature running around that has a very fake-looking snout. All of this is intercut for unclear reasons with shots of a bear prowling through the woods.

The film sits on an uncertain ambiguity as to whether it is the bear or the berserker spirit from Norse legend. The film however offers a minimal number of explanations and reaches an annoyingly vague ending that explains almost nothing about why the particular character ended up being possessed. There is also a loud and annoying hard rock/heavy metal soundtrack.