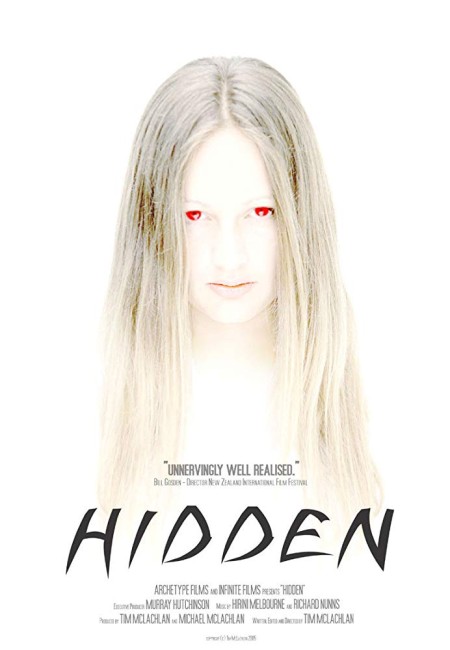 A group of camp counsellors run through the woods playing a game where they chase one another. As the group split up, find one another and re-pair, various demons and conflicts between them come to the fore.

Hidden hould not be confused with a number of other films with the same title, notably the highly enjoyable alien body snatcher film The Hidden (1987) or Hidden (2005), Michael Haneke’s creepy film about video surveillance that came out the same year as this Hidden. This is a low-budget first film from ingénue director/writer Tim McLachlan. Tim McLachlan had previously worked in the New Zealand film industry as a stuntman on the Lord of the Rings, King Kong (2005) and various other locally shot productions. Hidden was shot on digital video, mostly on location in native bush area around Auckland.

Hidden is a difficult film to get a handhold on. One might best describe it as sort of an existential Friday the 13th (1980) – where various camp counsellors are being pursued by something (maybe?) but there is no hockey-masked maniac – or perhaps a film like Survival Quest (1988) with arty pretensions. All of it shot through with an aesthetic undeniably inspired by The Blair Witch Project (1999) – much handheld and often migraine-inducing digital video-shot camerawork following people as they run through the woods.

I have to say that I found Hidden to be one of the most confusing and irritating films that I have seen in some time. Indeed, a friend who worked at the theatre told me that Hidden had had one of the highest percentages of audience walkouts of any film they had screened recently. I am all in favour of cryptic, baffling and surreal films. However, Hidden is a film where you spend nearly 90% of its 93 minute running time scratching your head trying to work out what is going on and getting more and more irritated at its refusal to come together into anything. There seems absolutely no narrative and just when one almost seems to be getting a grasp on what is going on, Tim McLachlan heads off at another tangent. Until nearly three-quarters of the way through, I was not even sure if I was watching something that I was going to review as a horror film, despite the poster and advertising giving one the impression that it was.

At times, Hidden feels like it is composed of the sort of the off-the-cuff fragments of psychodrama that might emerge from an acting improv class. Most of the film is taken up by weird little vignettes between the characters. A girl hides up a tree with a guy who sits there saying nothing, throwing things at her and making monkey noises, before the two of them act out a scenario of a photographer and his model as he clicks pretend photographs of her. Another guy runs through the woods conducting mock soldier antics, doing forward rolls, pulling pretend guns and so forth. Four others hide in a church where various tensions within the group emerge, including two of them believing they have seen a ghost but being embarrassed to admit it. Two others hide in a graveyard where the girl (Suzanne Sharp) opines a belief in the afterlife and how death is more interesting than life and the guy scathingly disagrees. Another girl struggles to climb a pole to a platform and has various flashbacks to her childhood where it is unclear what is happening.

The weirdest parts involve the character of Marty (Kiel McNaughton) who believes he has disturbed a taniwha (a legendary Maori monster) and becomes possessed, pursuing Hayley Halliday through the woods while scuttling like a crab and bouncing off trees and pylons. Later, Marty seems to shake off his possession and meets various Maori figures who offer cryptic advice. A mysterious farmer (Wayne England) also wanders through and appears to wield an axe with sinister intent and to be obsessed with a gravestone.

Tim McLachlan flips back and forward between these scenarios. He constantly hints at sinister things – the farmer and his axe, various of the party pursuing others with seemingly threatening intent, the taniwha-possessed Marty, a ghost story, the mention of someone who died in mysterious circumstances – but then backs off and suggests that this is not the case at all. Most of all, one is left with a baffling “What the hell is going on here? What is this film meant to be about?”

To Tim McLachlan’s credit, he does eventually offer an explanation and Hidden pulls together with a modest surprise that makes reasonable sense. [PLOT SPOILERS]. Here Hidden reveals itself as yet another variant on the by-now clichéd deathdream ending, wherein all the peculiar things happening up to that point are explained by the character(s)’ realisation that they are dead. This is a twist ending that first originated in An Occurrence at Owl Creek Bridge (1961) and has become hackneyed through overuse in recent years in films like The Sixth Sense (1999), The Others (2001), Soul Survivors (2001), The Brown Bunny (2003), Dead End (2003), I Pass for Human (2004), Reeker (2005), Stay (2005), The Escapist (2008), Passengers (2008), The Haunting of Winchester House (2009), Someone’s Knocking at the Door (2009), The Last Seven (2010), 7500 (2014), The Abandoned/The Confines (2015), Shadow People (2016) and Alone (2017), plus the finale of tv’s Lost (2004-10), plus two other New Zealand entries The Locals (2003) and Wound (2010). Had the twist not been a familiar one, it would have made for a passable surprise wrap-up. Even given that, it is a major strain in sitting through some 80 minutes of baffling impenetrability to get to that point.