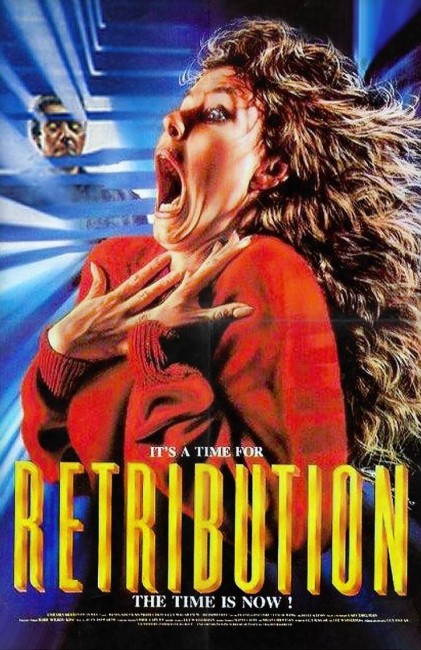 On Halloween Night, artist George Miller jumps from the roof of L.A.’s Don Hotel but survives the fall. Several weeks later, he is released from hospital, deemed mentally stable by psychiatrist Jennifer Curtis. He returns to his room at the Don Hotel and resumes life. At night however, George goes out and tracks down people. After he does so, his eyes begin to glow and he wields psychic powers, killing them in various ways. Afterwards, George wakes with no memory, just dreams of what happened. When he sees the deaths in the newspaper, he is troubled by his involvement, although Dr Curtis dismisses this as something he is imagining. George comes to believe he is possessed by Vito Minelli, a man who was killed over underworld debts. He becomes certain that Vito’s spirit inhabited him after he fell on the pavement and is now taking over his body to exact retribution against his killers.

Retribution was a feature film directorial debut from Guy Magar. Magar was born in Egypt but became a naturalised American. He began working as a director in television in the early 1980s and spent most of his career there. He has made sporadic films such as Dark Avenger (1990), an unsold superhero tv pilot, Stepfather III (1992), the non-genre Lookin’ Italian (1994) and Children of the Corn: Revelation (2001).

Retribution did achieve a theatrical release when it came out and I remember seeing it reviewed in some quite respectable magazines (Films and Filming if I recall correctly). It never had much lasting impact, least of all in terms of career for Guy Magar or in propelling Dennis Lipscomb to a star. Nevertheless it is an interesting and watchable artefact from the 1980s.

The film was made in the era when The Evil Dead (1981) cast a huge influence over the horror genre. Retribution comes somewhat influenced by The Evil Dead. Guy Magar’s direction consists of serving up a progression of lurid effects, mostly consisting of pastel lighting schemes and Dennis Lipscomb cackling loudly while his eyes glow green and things start being psychically flung about.

We get a series of schlock effects set-pieces – Mario Roccuzzo being sewn inside a pig carcass and then fed along a conveyor belt into a buzzsaw; Pamela Dunlap disembowelling herself with a knife while her kitchen cupboards flap at her; and Jeffrey Josephson made to cut off his own hand with a blowtorch while Lipscomb levitates himself in a cage and then causes the cage to crush Josephson.

Retribution is fairly ordinary in the story department – there is nothing particularly complicated about its Supernatural Retribution and Possession plot. What is noticeable is that the film pays somewhat more attention to the characters. They are not exactly in depth but the oddballs around the hotel and even Dennis Lipscomb’s potential romance with hooker Suzanne Snyder is given some time where you at least feel an affection and sympathy for the characters.