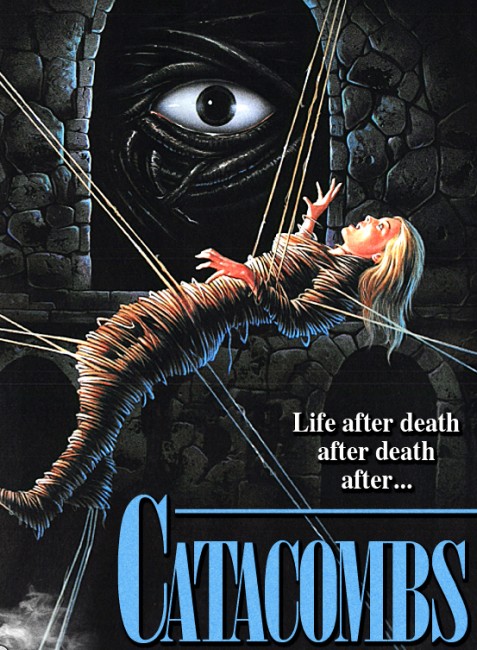 aka Curse IV: The Ultimate Sacrifice

In 1506, The Inquisition bricks up a possessed albino in the catacombs beneath The Abbey of San Pietro en Valle. In the present-day, American schoolteacher Elizabeth Magrina arrives in Italy to visit the abbey. She is welcomed by the monks, all except for the severe Brother Marinus who disapproves of women being there. Down in the catacombs, the seal falls off the bricked-up wall and something starts to stir. Soon mysterious supernatural occurrences are happening all over the monastery and the monks are being killed.

Catacombs is an interesting oddity from father and son Albert and Charles Band’s Empire Productions. The making of Catacombs is rather erratic. It started filming in 1988 and was released that year in several international territories. However, due to the financial collapse of Empire in 1988, the film was never seen in the US until 1993. At some point, it was retitled Curse IV: The Ultimate Sacrifice in an effort to appear to be a sequel to the dreadful H.P. Lovecraft adaptation The Curse (1987). There had been two sequels made to The Curse – Curse II: The Bite (1988) and Curse III: Blood Sacrifice (1991) – and Catacombs was renamed so as to appear to be one of these. The Curse films were sequels only by the fact that they had been designated such – none of the films share a single plot element or cast/production member in common (nor were even made by the Bands). It is sometimes misreported that Catacombs started shooting as Curse IV but this must surely be erroneous in that Catacombs only started shooting a year after The Curse came out, at which point nobody must have known there would be two other semi-sequels.

Some of Empire’s films have been quite good – Trancers/Futurecop (1985), Eliminators (1986), Zone Troopers (1986), Robot Jox (1990) and most notably Re-Animator (1985). Catacombs is an almost good effort. The director the Bands assigned was David Schmoeller. Schmoeller first appeared with Tourist Trap (1979) for Charles Band and went onto make the likes of Crawlspace (1986), Puppetmaster (1989) and Netherworld (1992) for the Bands, as well as other low-budget efforts (see below).

What one quite liked about Catacombs was Schmoeller’s investing the film with a few things that make it more than another of Empire’s standard low-budget goo and slime efforts a la Ghoulies (1985) and sequels. There is an effort to portray the world of the abbey and a good thirty minutes of the film’s opening sections are given over to character building. There are some nice writing here – especially a piece from a dying monk (Feodor Chaliaplin) who expresses regret to Vincent Van Patten that he never had sex and, in imagining what it might have been like, comparing it to religion.

Catacombs appears to have been filmed at an actual monastery – indeed, Albert Band actually owned a castle in Italy – and this adds quite a good deal of authentic atmosphere. The film also has a score from Italian musician Pino Donaggio who worked on many Brian De Palma films. Even though Donaggio is blatantly copying from The Omen (1976) at various points, he gives the score much more class than most Empire films usually have.

The film is less effective when it comes to the actual supernatural elements. The building atmosphere is all hackneyed low-budget standard – something stirring in the crypt, mysterious falling dust, a bleeding hourglass, creeping mist, prowling point-of-view camerawork accompanied by sinister music on the soundtrack, voices whispering the heroine’s name. There is the odd effective moment like where Vernon Dobtcheff goes to pray and in the background we see the life-size statue of Christ stepping down off the cross and coming to stab him.

Catacombs reminds quite a bit of the British film Dark Waters (1993) that came out around the same time. Both are films about sinister occult forces stirring in the depths of Catholic retreats (a monastery here, a nunnery in Dark Waters); both feature a woman outsider travelling to the monastery/convent to delve into its secrets; both feature oodles of mysterious supernatural happenings and the eventual revelation of a demon imprisoned in the depths of the monastery.

Laura Shaeffer has a lovely beauty and naturalness in the lead – it is a surprise to discover that she only ever went onto make four other acting appearances according to the IMDB. One of the great effective surprises comes towards the end when the demon emerges and she turns around in slinky black dress with blackened eyes and starts tempting and battering about Vincent Van Patten. The disappointment that then comes is that she is soon replaced by Brett Porter as an albinoid, pock-marked demon-possessed figure.

Unfortunately the big climax is a letdown, especially on the otherwise worthwhile build-up. The demon throws Vincent Van Patten about, he grabs the mirror and despatches the demon by shining light at it. That’s it. We never learn the big secret that Van Patten was holding. Nor for that matter does the subplot about the harshly repressed Brother Marinus gaining control of the monastery and becoming power crazed go anywhere. One suspects that the original vision of Catacombs was much more ambitious in scale and that somehow in its production problems, the scale of this was cut back and everything hastily wrapped up.

Director David Schmoeller has made a number of other genre films, many of these for the Bands, including the strange Tourist Trap (1979) about a backwoods motelier and his living mannequins, the stalker thriller The Seduction (1982), the psycho film Crawlspace (1986), Puppetmaster (1989) – the first in the popular video series from the Bands, the alien vampire film The Arrival (1991), Netherworld (1992) and the children’s films The Secret Kingdom (1997), Search for the Jewel of Polaris: Mysterious Museum (1999) and Little Monsters (2012).