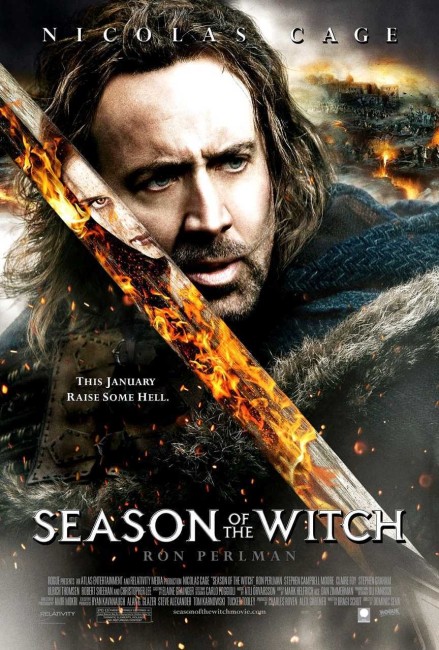 The 14th Century. Behmen and Felson have joined up to fight for the Crusades in the Holy Land. After killing a woman, Behmen becomes sickened with the senseless slaughter of innocents that goes on in the name of God. He and Felson renounce the fight and turn their backs on the church. Passing through a town, they are arrested for desertion. They are taken before a Cardinal who is dying of the Black Plague. He asks them to perform a service in return for their freedom from execution – to escort a witch to the monastery of Severac where a ritual can be conducted that will remove the curse of the plague that she has brought upon the land. Behmen agrees so long as the witch is guaranteed a fair trial once she arrives. They set out, guided by the swindler Hagamar and accompanied by the priest Debelzaq, who the witch accuses of torturing her, and the earnest young Kay who joins to earn the right to be a knight. Debelzaq warns that the witch will use their weaknesses against them. Behmen believes in the witch’s innocence but soon members of the group start dying.

Season of the Witch – not to be confused with either the video-release retitle of George Romero’s suburban witchcraft film Jack’s Wife/Season of the Witch/Hungry Wives (1972) or Halloween III: Season of the Witch (1982) – follows Nicolas Cage’s most recent attempts to intrude into the fantasy genre, coming straight after the previous summer’s equally lame The Sorcerer’s Apprentice (2010).

There is little about Season of the Witch that gives enthusiasm before one goes into the theatre. Director Dominc Sena once made the quite reasonable serial killer film Kalifornia (1993) but has since churned out empty-headed action films, including the previous Nicolas Cage entry Gone in 60 Seconds (2000), the laughable Swordfish (2001) and the dull thriller Whiteout (2009). Neither did the distributor think much of Season of the Witch, holding it up for most of 2010 before dumping it in the North American releasing dead zone of January 2011.

Season of the Witch sinks badly within the opening scene. Dominic Sena serves up what could have potentially been a grim scene where three women are hung over the side of a bridge to test whether they are witches. You might contrast this to the very similar opening in Matthew Hopkins – Witchfinder General/The Conqueror Worm (1968), which contained a brutally harsh portrait of the cruelty of the 17th Century witch persecutions. Season of the Witch could have gone in similar directions but clearly the effect of hanging three women is not enough for Dominc Sena who pumps the scene up with ridiculous effects including the corpses returning to life, projectile vomiting and an old woman conducting superhuman leaps back up to the bridge from the river below.

There have been a sporadic number of fantasy films that have used the Middle Ages/Crusades period as a setting – Ingmar Bergman’s The Seventh Seal (1957), Ladyhawke (1985), The Navigator: A Mediaeval Odyssey (1988) and in the last couple of years prior to this the likes of Solomon Kane (2009) and Christopher Smith’s Black Death (2010), which has a very similar plot to Season of the Witch in many regards. The aforementioned Witchfinder General also begat a spate of films about the persecution of witches – most of these were works of barely disguised sadism designed to highlight scenes of torture, although this sub-genre did produce Ken Russell’s fine The Devils (1971). On screen, the Middle Ages is a period resonant in imagery – where the Black Death seems to cast a shadow over everything and where civilisation seemed to hang between reason, superstition and religion.

Season of the Witch has a great deal of potential in terms of the issues it deals with – the question of whether the moral justification for The Crusades (where The West liberated what it considered the Holy Land of Jerusalem from the infidel occupiers) was a worthy one; whether the witches tortured by the Church were guilty or victims of ignorance and superstition; the question of the existence of demons; whether the Catholic Church was divinely sanctioned or a corrupt organisation that wielded power cruelly.

The fascinating thing about Season of the Witch is that, though it is made in an age where the superstitions that dominated the Middle Ages are no longer with us, it seems to accept without question the views of the era. Demons exist and, though there is some balance given to showing the church as cruel persecutors of innocents, witches are regarded as having supernatural powers anyway. There is lip service given to how innocents were slaughtered during the Crusades, although this is reduced to a sole woman that Nicolas Cage accidentally stabs with his sword rather than an entire country of people who were massacred because they occupied what some people believed to be the Holy Land – the implication here being that the Crusades were just but the Church was ignorant in condemning the innocent along with those who deserved to be slaughtered. (A sneaking part of one believes that this may well have been watered down because the producers were trying to avoid any comparisons to the contentious contemporary issue of the Iraq War).

Similarly, the Church is criticised throughout but at the end the film accepts the notion that it had the power of the Almighty on its side in that it requires the Church’s rituals of exorcism being conducted in one of its monasteries to banish the demon. In its end voiceover, Season of the Witch even buys into the incredulous mediaeval notion that the true reason for the Black Plague was due to demonic forces rather than anything medical. A version of Season of the Witch that dug beneath to question the issues it deals with would certainly have emerged a radically different film. It is a little disturbing that so much of what is portrayed comes at face-value. It would be not unakin to seeing a film wherein the Ku Klux Klan are portrayed as heroes and African-Americans of the South regarded as ignorant, dangerous and deservous of being hung and burned on crosses.

You have to take Season of the Witch on its own terms – as a Mediaeval fantasy action film that is designed as having no greater substance or historical depth beyond what you see up on screen. Dominic Sena directs in terms of spectacle and action and the film lacks any greater subtlety than that. Much of the film is written to hang on doubts about whether the witch (Claire Foy) is an innocent or her powers are real at the same time as the deaths among the party mount.

To me, this part of the script – a journey where the party were unsure whether the person they were transporting was a real witch or an innocent – held the most potential. The film could have had a greatness here, perhaps emerging akin to the beautiful ambiguities about witchcraft that Carl Dreyer’s Day of Wrath (1943) held. However, Dominc Sena is woeful in terms of ever creating any subtlety in these sections. At most, the script throws in some lame end twists about the real purpose of the mission but these do not make a great deal of sense when you sit down and think about them.

Frequently, Season of the Witch has been put together in terms of its set-pieces – various sword fights; montages of CGI generated battles; attacks by packs of wolves in the woods; a sequence where they must move the cart across a flimsy rope bridge (something that would almost certainly have caused the bridge to collapse given the weight of the cart).

The climax of the film involves the attempts to exorcise the demon. Contrast these sequences to the ones in The Exorcist (1973), which were about men of faith dealing with the face of evil – here by contrast, Dominc Sena has blown the exorcism up into action and visual effects spectacle where the demon melts the bars of the cage, becomes a flying bat-like wraith, possesses and reanimates the corpses of dead monks to attack the party, before the emergence of a full-winged demon form that Nicolas Cage and Ron Perlman must take on and defeat with swords and fisticuffs (even headbutts!) in true Robert E. Howard-style. The effects in these sequences are nothing particularly special, with most of them drawing obvious attention to the fact that they are visual effects.

Nicolas Cage gives a typical performance. In the way that he tries to denote intensity and moral authority, Cage is like the cartoon representation of a maddened bull that dips its brow, dilates its nostrils wide and paws the ground as preparation to charging. Ron Perlman, an always worthwhile genre regular, plays with an effortlessly laidback ease opposite him – I think I would have enjoyed Season of the Witch far more if Ron Perlman had taken over Nicolas Cage’s role. Relative unknowns Stephen Campbell Moore and Robert Sheehan give reasonable performances. Another genre legend Christopher Lee turns up as the cardinal, although his face is buried beneath a mass of makeup appliances to create the effects of the plague.