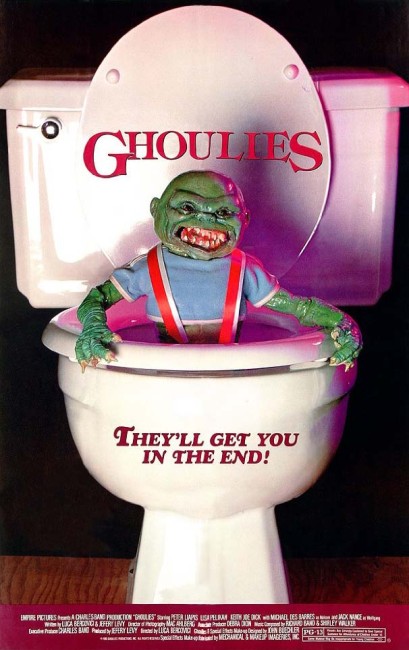 Jonathan Graves inherits the mansion of his father, the notorious Satanist Malcolm Graves. At his house-warming party, he decides on inspiration to hold a Satanic ceremony and unwittingly succeeds in conjuring up a horde of small goblins. Soon after that Jonathan becomes obsessed with black magic, bending the ghoulies to his will and planning to sacrifice his friends to the Devil.

Designed as no more than a cheap rip-off of Gremlins (1984), Ghoulies proved an unexpected success on the newly emerging video-market when it came out. It was a success that allowed Empire Productions, run by father and son Albert and Charles Band, to build a conveyor belt industry, turning out a series of ratty but occasionally enterprising low-budget exploitation films.

When the film’s main premise hinges on a party where the main alternative to playing Trivial Pursuit and Strip Poker is to hold a Satanic ritual, we can see we are not exactly entering into high-credibility stakes. Sadly Ghoulies does not hold any of the tongue-in-cheek comeuppance that has proved the saving grace of many other Empire productions such as Trancers/Futurecop (1985) and Re-Animator (1985). Indeed, the film’s poster with a ghoulie popping up out of a toilet and the legend “they’ll get you in the end” (a scene sadly unfulfilled anywhere in the film) is the funniest thing there is on show.

There is certainly a nasty maliciousness to Empire’s in-house makeup man (and sometimes director) John Carl Buechler’s creatures despite the evident penny-pinching – the principal appeal Ghoulies and its three sequels has is its gooey slime potential and the malicious glee of the creatures.

The filmmakers seem unaware that in England ‘ghoulies’ or ‘goolies’ is a vernacular expression for testicles. At least, Michael Des Barres has found a film where his ghastly overacting is consummate with the quality of the production.

Director Luca Bercovici has maintained a career as an actor since the late 1970s. He has directed eight other films including the genre likes of the vampire comedy Rockula (1990), the horror comedy The Granny (1992), the psycho-sexual thriller Dark Tide (1994) and the SF film Convict 762 (1997), as well as wrote the screenplay for Hotel of the Damned (2016).