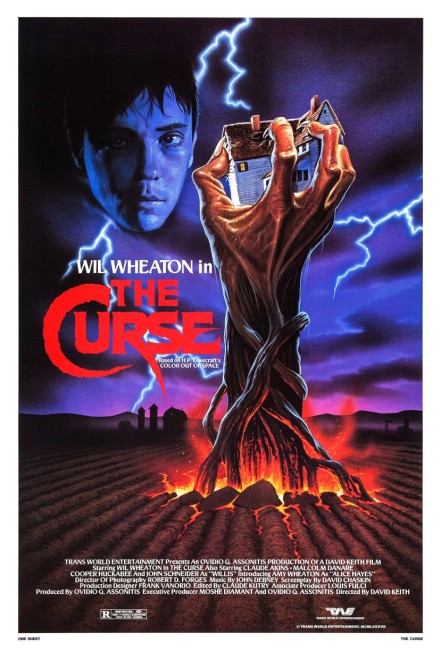 A meteorite comes down on the Crane farm in Tellico Plains, Tennessee. Teenager Zack sees the meteorite glowing in the dark. Realtor Charles Davidson, who is seeking to speculate on the land when a new dam is built, conspires with the local doctor to pass it off as waste that has been dumped from an airplane and Zack’s claims are treated with scorn by his stepfather. The meteorite’s contents then start to spill into the water table. Giant but rotten fruit soon blooms and the farm animals start mutating and behaving in a disturbed way. Next, Zack’s mother and others start to become infected.

The Curse was one of a spate of H.P. Lovecraft adaptations made during the latter half of the 1980s, following the cult success of Re-Animator (1985). With Re-Animator, Stuart Gordon took a tongue-in-cheek splattery approach to the material that was copied by subsequent Lovecraft adaptations. The Curse is an uncredited adaptation of H.P. Lovecraft’s The Color Out of Space (1927), which had previously been filmed as the dull Die, Monster, Die!/Monster of Terror (1965) starring Boris Karloff and Nick Adams.

The Curse was also the directorial debut of actor David Keith, an actor who came to fame with parts in the likes of An Officer and a Gentleman (1982) and Firestarter (1984). It starred Wil Wheaton, who was caught just after the success of Stand By Me (1986) and just before his ongoing role as Wesley Crusher in Star Trek: The Next Generation (1987-93). The script was from David Chaskin, who had just written A Nightmare on Elm Street Part II: Freddy’s Revenge (1985) and would eventually go onto write something good with I, Madman/Hardcover (1989).

Unlike most copies of Re-Animator, indeed most 1980s popcorn splatter films, The Curse takes itself relatively seriously. Unfortunately, this is one case where the tongue-in-cheek treatment would have benefited the film no end. Initially, David Keith does an okay job setting up the scenario, drawing some well-defined characters – the fundamentalist stepfather, the sexually frustrated wife, the dumb hick son, the greedy realtor.

While David Keith’s set-up is interesting – and with a better director could have made for a potentially worthwhile film – his gradual addition of horror elements to the mix quickly takes the exercise down into Grade Z territory. Here Keith’s direction is terrible. He evokes nothing in the way of atmosphere. All the effects – giant fruit squirting goo, people with sores and running pus, and in one hilarious scene giant chickens pecking a young girl – are cheesy, frequently laughable and without the slightest degree of conviction. There is also a tinny, cheap-sounding score. Between David Keith’s direction, the bad effects and bad score, The Curse nosedives big time.

The H.P. Lovecraft story was later remade as Color Out of Space (2019) with Nicolas Cage.

David Keith has directed two other films – the equally cheesy adventure film The Further Adventures of Tennessee Buck (1988) and the thriller Waterville (2003) – and then got the message and subsequently returned to acting.

The film was a modest enough hit principally on video for the producers to make two sequels – Curse II: The Bite (1988) and Curse III: Blood Sacrifice (1991), none of which are connected to this, or even each other, in any way except name and featuring gooey makeup effects. A fourth entry Curse IV: The Ultimate Sacrifice was a retitling of Catacombs (1988), an earlier unreleased Empire film. .