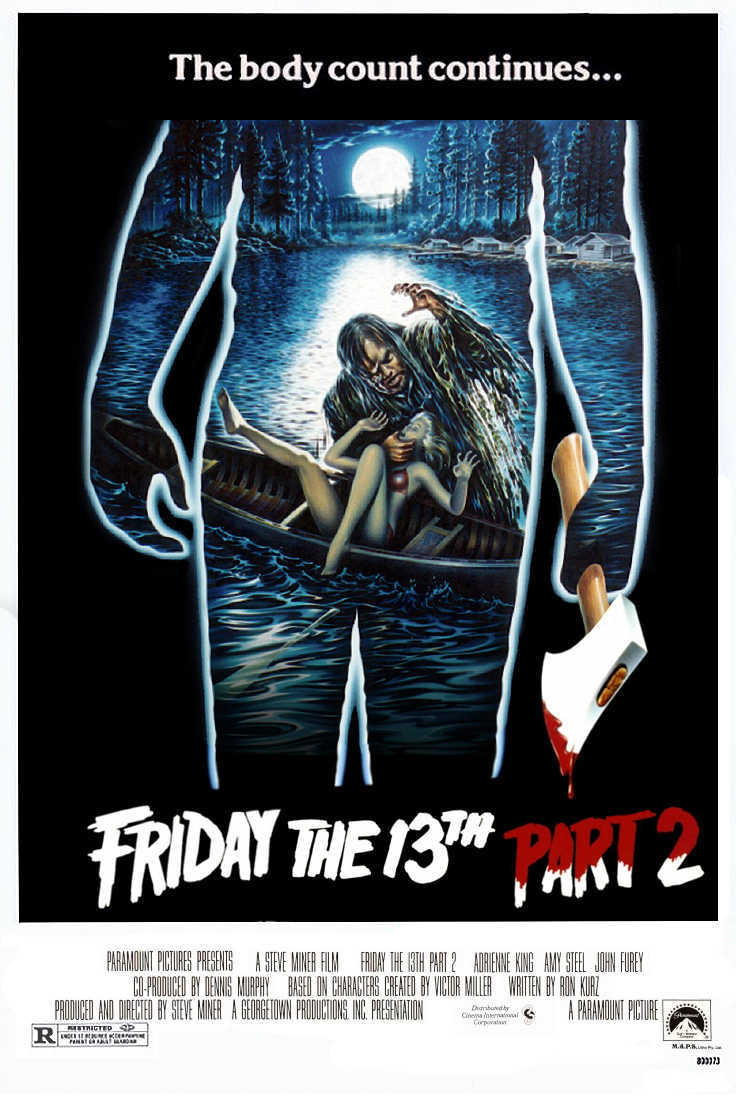 Five years after the massacre at Camp Crystal Lake, a group of summer camp counsellors go up to the neighbouring camp for counsellor training. There someone starts slaughtering them and it becomes apparent that Jason Voorhees did not drown at Crystal Lake but has survived in the woods.

This was the first of the never-ending sequels to the sleeper hit Friday the 13th (1980). This is essentially where the formula for most of the rest of the series was established – in particular, the move to make Jason into the relentless killer he became, as opposed to Mrs Voorhees.

For the most part, Friday the 13th Part 2 quickly falls into the formula that was established by the series and imitators and becomes a tedious round of deep-breathing phone calls, cats making un-cat-like jumps through windows, teen pranksters, voyeur scenes and far-fetched reasons for people to go wandering alone in the dark – Kristen Baker at one point goes in search of her pet poodle and later for a knife to cut down someone caught in a tree.

In some ways though, the sequel is a better killing machine than the original. It has its’ fair share of silly scenes – particularly Amy Steel’s managing to fool Jason at the end merely by putting on his mother’s old sweater. Jason appears far more vulnerable than he became in the sequels but seeing him wandering about like a reject from The Elephant Man (1980) with a bag with one eyehole over his head seems more funny than scary. (This was before the hockey mask became an established part of the series).

Steve Miner manages some okay scares during the pursuit of Amy Steel. Miner is still a crude director, none of his red herrings have a conviction and the ending unsuccessfully tries to copy the just-when-you-through-he-was-dead jump at the end of Friday the 13th. At his crudest, Miner offers up one shot that tracks an appealing derriere before a slingshot is fired at it, which seems to symbolise the series entire appeal – to set up nubile bodies for gawk appeal before having them attacked.

Steve Miner made his directorial debut with Friday the 13th Part 2. Miner began working as a production assistant for Wes Craven on The Last House on the Left (1972) and produced Friday the 13th. He would go onto helm the subsequent entry Friday the 13th Part III in 3D (1982). Following this, Miner went onto an unexceptional career as a genre director with the haunted house comedy House (1986); his one standout Warlock (1989); the weepy Mel Gibson cryogenic sleeper awakes romance Forever Young (1992); Halloween H20: Twenty Years Later (1998), Lake Placid (1999) and the remake of Day of the Dead (2008). Outside the genre, Miner has directed numerous episodes of tv series such as The Wonder Years, Chicago Hope, The Practice and Dawson’s Creek and some so-so teen films, Wild Hearts Can’t Be Broken (1991) and My Father the Hero (1994).