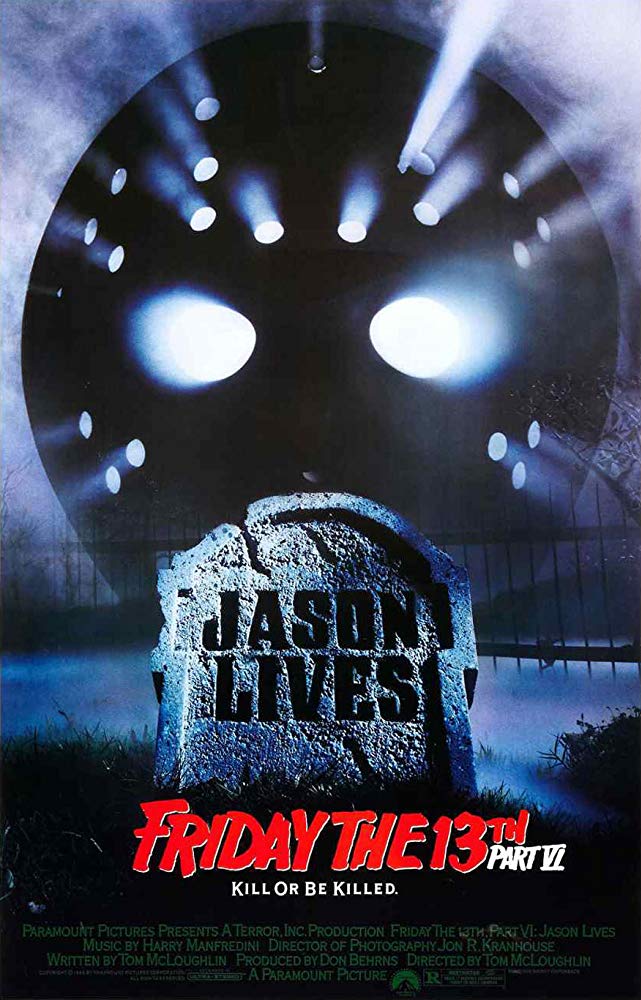 Tommy Jarvis returns to Jason Voorhees’s grave, digs his body up and impales it with a metal spike, determined to send Jason to Hell. However, a lightning bolt strikes the spike and succeeds in reviving Jason. As Jason starts slaughtering a group of kids out at the old Crystal Lake camp, Tommy tries to alert the local sheriff’s office but the sheriff instead has him locked up.

Jason Lives: Friday the 13th Part VI, the sixth entry in the Friday the 13th series, was actually the best chapter up to that point and continued to be at least until No. 9 Jason Goes to Hell: The Final Friday (1993). On the face of it, the formula is no different to any of the preceding five films – there is a parade of virtually faceless teens and assorted victims who are duly dispatched by Jason in suitably gory ways; Jason is an invincible killing machine who takes the most extraordinary amount of damage and is revived in ways that contradict everything that has gone before (the way in which the mouldering worm-infested husk of his corpse is revived into a living creature solely by a lightning bolt here is utterly preposterous).

However, there is some care put into the formula that makes Jason Lives: Friday the 13th Part VI not as mindless an effort as the preceding entries – nobody takes their clothes off; the heroine who survives to the end has more savvy than the usual run of virginal Final Girls; and the film contains the first visit to Camp Crystal Lake where we see the counsellors at the camp actually engaged in counselling kids.

There is also a considerable sense of humour – the pre-credits sequence, for instance, ends with Jason walking into camera and throwing a machete in a parody of the opening credits of the James Bond films. Some of the dialogue wittily spoofs the cliches this type of film has set up – “We better turn around,” says a girl in a stopped car, “Why?” her boyfriend asks. “Because I’ve seen enough horror movies to know any weirdo wearing a mask isn’t friendly.” The kids at the summer camp, while hiding under the bed, discuss in a tone of bored cynicism whether they are going to survive – “We’re dead meat. Real dead meat.” “So what were you going to be when you grew up?”

The suspense is conducted relatively well – there is one nifty killing where we see the dent of a victim’s face being impacted in a metal wall from the other side. Hero Thom Mathews is dull and stolidly humourless.

Director Tom McLoughlin made a number of other appearances within the horror genre. He debuted as director with the haunted mausoleum film Rest in Peace/One Dark Night (1982) and went onto direct the angelic fantasy comedy Date with an Angel (1987), the Stephen King adaptation Sometimes They Come Back (1991), The Haunting of Helen Walker (1996) – an tv movie adaptation of Henry James’s oft-filmed The Turn of the Screw (1898) and the psycho-thriller The Unsaid (2001), as well as writing the screenplay for FairyTale: A True Story (1997).