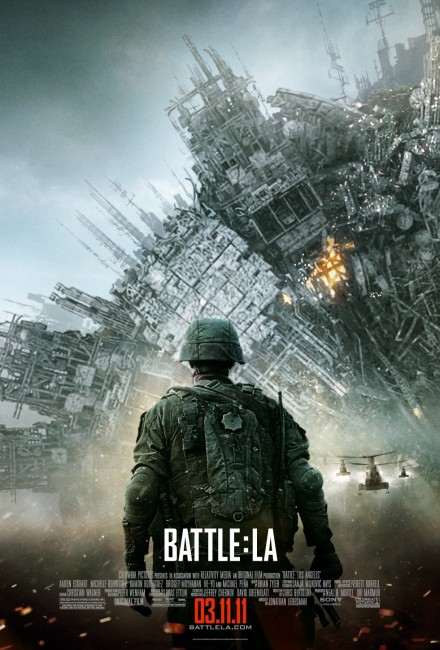 As meteorites come down near the major cities around the world, a detachment of marines stationed at Camp Pendleton are mobilised. Staff Sergeant Michael Nantz has just been granted his discharge papers but is called back to take charge of his team under rookie officer Second-Lieutenant William Martinez. They learn that the meteorites contain artificial objects. As they watch on live news broadcasts, alien creatures emerge and begin shooting and blowing up everything in the vicinity. The marines are sent in to Santa Monica to extract a handful of remaining civilians before the area is razed by bombing. Once in the area, the unit comes under heavy enemy fire. With their helicopter wiped out, they have to fight their way across the city along with a handful of civilians in order to get to freedom.

Director Jonathan Liesbesman is a relative newcomer who has mostly toiled in slickly produced throwaway horror fodder with the likes of Darkness Falls (2003), The Texas Chainsaw Massacre: The Beginning (2006) and The Killing Room (2009). Clearly, Liebesman is making his bid as a big-time director with Battle Los Angeles. With the film’s success, this clearly worked and Liebesman went onto direct Wrath of the Titans (2012) and the reboot of Teenage Mutant Ninja Turtles (2014).

Perhaps the best way to characterise Battle Los Angeles is to imagine a big effects-driven alien invasion film such as Independence Day (1996) having been rewritten as one of the modern grittily real shakycam-shot war movies that began with Saving Private Ryan (1998). In particular, Battle Los Angeles makes one think of a big-budget alien invasion movie reconceived along the lines of Black Hawk Down (2001) or The Hurt Locker (2008).

Jonathan Liebesman has taken from Cloverfield (2008) the idea of integrating lavish large-scale special effects into shakily handheld camerawork and upped everything to another level. (Purportedly his inspiration for this came after watching various videoclips of firefights shot by soldiers in action in Iraq). This war film aspect takes over the entire film – imagine the frenetic thrown-into-the-trenches busyness of the first twenty minutes of Saving Private Ryan extended to an entire film with almost no pause in the pounding action, explosions and gunfire for the better part of two hours. (One of the more amusing quotes I read was an interview with Jonathan Liebesman who said that he declined the offer to shoot Battle Los Angeles in the near-ubiquitous 3D process of the moment because the film would have made audiences sick within minutes).

On the other hand, there rarely seems anything more to Battle Los Angeles than loud pounding explosions and frenetic gunfire. The characters are known solely by their rank and name as introduced in text credits on the screen when we first meet them – without these it would be almost impossible to tell most of the soldiers apart. Anything beyond this seems written in broad cliches – the platoon leader with the chequered past who needs to earn his redemption; the bookish rookie commanding officer who has never been in a real combat situation before; the wet-behind-the-ears virgin who you know will meet a tragic end; the tough woman soldier who kicks ass alongside the men. The script, when you can hear the dialogue over the explosions, seems less written than it is conveyed in action storyboards and comic-book onomatopoeia. Most of the dialogue comes in groan-worthy, flag-saluting cliches – “Retreat, Hell,” “Marines don’t quit,” “I’m not losing any more men/civilians” and so on.

Alien invasion films always come with a subtext. In most alien invasion films, the world stands in for the United States and the alien represents an amorphous subconscious social anxiety. The most famous example of this was the alien invasion cinema of the 1950s where aliens seemed to represent a looming threat of something poised to quash the United States, which variously stood for the new fears posed by the unleashing of the atomic bomb or of ideological infiltration by Communism. The alien invasions of the 1990s as typified by tv’s The X Files (1998-2002) was all about disillusionment with government and the belief that the powers that be have been lying to one, while Independence Day seemed to be about rallying together as a great nation once again. Post 9/11 alien invasion films such as War of the Worlds (2005) and The Day the Earth Stood Still (2008) seem construed as direct critiques of the Iraq War and Bush Government.

In Battle Los Angeles, the aliens are exceedingly generic and the clear subtext seems to be one of backing the US military because they are the good guys who put their life on the line without question for what is important and will fight on no matter how terrible the situation gets. It is largely a film about reclaiming tarnished heroism and honour in the face of overwhelming adversity. This might be a message that needs to go out to the general American public who seem in need of belief in their military are heroes again as the country drags on in the process of fighting two lengthily protracted wars with no end in sight. For the rest of the world though, this feels about as welcome as a film about tough heroic white cops bending the rules to bust gangbangers would be with ghetto audiences. After Abu Ghraib, the Haditha Incident and the Mahmudiyah Killings and with a civilian death toll from the Iraq War estimated as around the 100,000 mark in terms of collateral damage, a lot of people (this author included) have difficulty accepting any kind of black-and-white view of the honour, let alone the competency, of US soldiers.

Certainly, Battle Los Angeles has been carefully cast so that the military unit that goes into battle is a varied ethnic mix – even with soldiers from improbably as far afield as Nigeria and with women also getting into the combat – as though the filmmakers were trying to subvert the perception that they were making another film that was about the US saluting the flag by remembering to add a little bit of diversity. I’m sorry but retitling the film World Invasion: Battle Los Angeles for international audiences still does not make it any less a film about US military cock-stroking. For most of the world, this is only a film you can enjoy if you switch off a certain part of your brain and ignore the reverent flag saluting scenes and misty-eyed belief in duty and heroism, despite the fact that the filmmakers try to rub your face in it.

Battle Los Angeles feels often like a film that is pitched to the videogame addicts who spend 24 hours of the day playing Counterstrike and Call of Duty, either that or the people on the IMBD Trivia and Goofs boards who seem unhealthily obsessed with the correct working details of the guns used or minutiae about the military aircraft and vehicles seen in films. With the US Department of Defense credited for their cooperation and the film allowed to shoot on actual Air Force bases, you get the feeling that Battle Los Angeles has been constructed with a determination to get this military trivia and the details of units in operation right. All of which is fine for pandering to said trivia junkies but amounts to a big “one could not care less” for the rest of us general audience.

One of the other major quibbles I had with Battle Los Angeles is the lack of thought that has gone into the aliens. I wished the film would have done something more interesting than simply come up with some different designs for the aliens’ hardware and spaceships (many of which appear very similar to the ships in Skyline (2010) from a few months earlier). The biggest bugbear is when the film tries to come up with motivation for the aliens. “The leading hypothesis is that their target is our water,” one of the scientists interviewed on cable news says in the background, which had me laughing. For all the military advisors that the film has, it is a shame that they did not go so far as to simply pick up a phone and get a scientist on the other end who could shoot down such an absurd notion.

Consider this – water consists of two elements, two atoms of hydrogen, one of oxygen. Hydrogen is the single most abundant element in the universe, oxygen is the third most abundant. I find it hard to believe that aliens advanced enough to travel all the way across the universe and invade a planet in overwhelming force would be unable to come up with a simple chemical process to combine these two universally prolific elements and make water – it is something you can do in a terrestrial chemistry lab. It seems absurd to suggest that the aliens would be unable to do this on an industrial level and would rather choose to commit vast military resources to invading an inhabited planet, losing numerous lives in the process just to get some water.

Even aside from that, the Solar System is filled with frozen ice in the form of numerous comets, while Saturn’s rings almost entirely consists of ice, where it surely would be much easier for the aliens to drag some of this back home than vanquishing an inhabited planet and carrying its water supplies up out of a gravity well. It is later stated that the reason that Earth is desirable because it is the only planet where water is liquid – again, this is ill-informed nonsense where even basic chemistry can tell you that water is solid, liquid or gaseous and all that is required in order to change its state is adjusting the temperature and/or pressure.

At the same time that Battle Los Angeles was released, the low-budget company The Asylum made their own cheap copy with Battle of Los Angeles (2011).