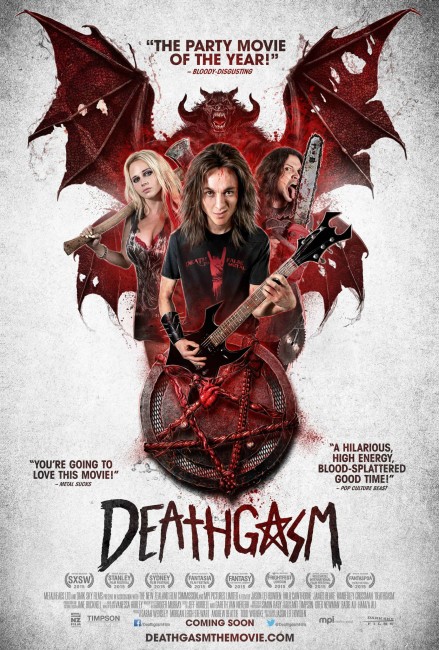 Following the arrest of his mother, the teenage Brodie goes to stay with his conservative aunt and uncle in the suburb of Greypoint where his passion for heavy metal music causes some consternation to their church-going ways. In a record store, he meets and befriends Zakk, a fellow heavy metal fan, and they decide to start a band together, naming it Deathgasm. Zakk learns a rumour that the aging heavy metal star Rikki Daggers is hiding out in Greypoint. They sneak into his house in search of a copy of his rare last record. As they are there, Rikki is attacked by Satanists and urges them to flee with the record. Inside, they find a copy of The Black Hymn, an ancient musical score in Latin, and decide it would make for a great song on their record. However, immediately after they play it, they find that it has enacted a rite that has caused everybody in the area to become possessed by demons.

Make My Own Movie was a competition created in 2012 by Ant Timpson, the producer of films like The ABCs of Death (2012) and sequels, Housebound (2014), Turbo Kid (2015), The Greasy Strangler (2016), The Field Guide to Evil (2018) and Censor (2021), plus director of Come to Daddy (2019).. Timpson also has a long history in New Zealand as the mastermind behind the various Incredibly Strange Festivals and 48-hour filmmaking competitions.

The first round of Make My Own Movie was held in 2012 where entrants were asked to submit a synopsis for a film and a poster design, which was then voted on via social media. This was won by How to Meet Girls from a Distance (2012). In 2013, the second round was held where the competition was this time renamed Make My Own Horror Movie. This was won by Jason Lei Howden, a digital effects artist working at Peter Jackson’s Weta Digital facility. The prize money was $200,000 budget, along with the offer of production resources. The result proved to an effort that enjoyed more than reasonable profile and acclaim at festivals worldwide. There have been no further rounds of Make My Own Movie so far.

Heavy metal music has a long had an association with occult and devil worship imagery, which has duly upset those elements in society who get wound up about such matters (as much of it seems intended to do). This – and the phenomenon of ‘backmasking’ (the Christian theory that circulated in the 1980s that rock groups recorded messages praising Satan backwards on their records in order to inveigle youth) – has made the natural spill over onto horror films.

Heavy metal horror films have included the likes of Trick or Treat (1986), The Gate (1987) and Black Roses (1988), which feature evil forces emerging from heavy metal records, and to some extent the climaxes of Crossroads (1986) where a good guitarist must engage in a guitar duel with Satan’s underling represented by a heavy metaller, and Knights of Badassdom (2013) in which heavy metal actually banishes the demon. The same year as Deathgasm came out also saw another heavy metal horror film with The Devil’s Candy (2015).

Deathgasm feels exactly like a bunch of former teenage metalheads have been given the resources to make a film and are looking back, roundly mocking their own aspirations and pretensions. Much of the humour comes with a knowing insider’s eye – all the chants of “death to fake metal”, the spoofs of the music videos, the makeup and band names – that sit alongside moments of surprisingly plaintive earnestness – like where Milo Cawthorne tries to explain to Kimberly Crossman exactly what metal expresses for him. (For all that heavy metal celebrates the demonic and Satanic and rebellion against staid church-going conformity, this is a film that when it comes down to it has the surprisingly ordinary hero actually fighting against unleashed demonic forces).

This is a film with a lot of sly humour packed into it in just about every corner – James Blake opens the last fabled record that Rikki Daggers has given them and registers his disappointment at being duped – “it’s a fucking Rick Astley record” – to a number of sly jokes at Dungeons and Dragons players – an explanation of the disparity between friends “I knew it, he’s Chaotic Neutral and you’re Lawful Good.” The happenings are slightly random in the plot department – occult hymn gets played, everyone in the area gets possessed amid copious splatter, hymn must be played again to stop everything – and not dealt out with any more depth than that. It is however the sense of outrageous balls-to-the-wall horror comedy mix that makes the film.

Based solely on the title, my initial impression of Deathgasm would be that it would be a work of taboo-defying necrophile horror – maybe something in the arena of NEKRomantik (1987) or the recent Nina Forever (2015) but more mundanely ‘deathgasm’ only refers to the name of the metal band rather than some perverse horror-sex combination. Jason Lei Howden and his team launch into the gore and splatter with the most all-out enthusiasm of most filmmakers since fellow New Zealander Peter Jackson fairly much set the benchmark with Braindead/Deadalive (1992).

This is a film that more than happily homages the 1980s heyday of the makeup-effects driven horror comedy dominated by the likes of Jackson, Sam Raimi’s The Evil Dead (1981) and Stuart Gordon’s Re-Animator (1985) – most of all, I kept thinking back to the cheesily entertaining Italian Demons (1985). Thus we get numerous scenes of faces ground off with angle grinders and chainsaws, intestine spillings, heads squished with engine blocks and all manner of peculiar implements and improvised weapons.

Amid all its copious displays of splatter and gore, the film also has a sense of humour that is completely whacky in its nonchalantly banal absurdity – like the scene where displeased Satanist leader Andrew Laing demands that his acolytes behead a failed captain a second time because it spilled blood on his carpet, or the image of Milo Cawthorne and James Blake wading in and trying to defend themselves against the possessed dead using sex toys.