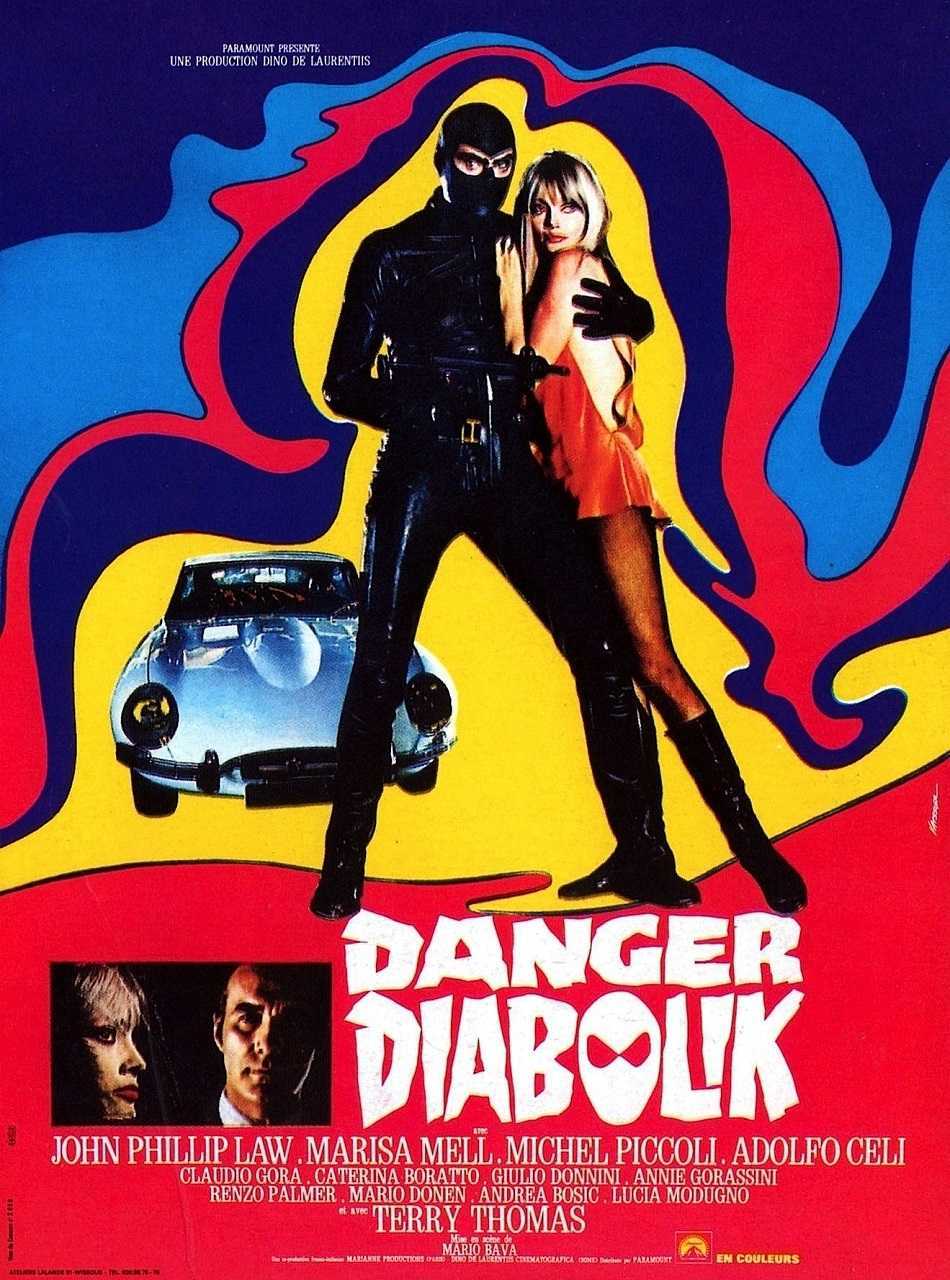 The masked super-criminal Diabolik makes a fool of the incompetent Italian authorities, stealing from under their noses, as well as blowing up the entire country’s tax records. In desperation, Inspector Ginko cracks down on organised crime in order to force them to help stop Diabolik.

Danger: Diabolik is a wonderful comic-book of a film. In fact, it is the next best thing the celebrated Italian horror director Mario Bava made, other than his debut feature Black Sunday (1960). Producer Dino De Laurentiis appears to have been so caught up with the film’s teasing tongue-in-cheek stylishness he returned to it with Barbarella (1968) and to a lesser extent with his remake of Flash Gordon (1980).

With its parade of fast cars, the heroine’s amazingly revealing series of costumes, the incredibly handsome hero in skintight black leather, Danger: Diabolik has a stylish sophistication that is wonderfully sexy. Some images like those of John Phillip Law and Marisa Mell making love in a bed covered with stolen banknotes have a decadence that is joyous. Indeed, the film’s celebration of anarchic anti-authoritarianism makes it possibly one of the most entertainingly subversive films ever foisted on the public – the scene where Terry-Thomas’s pompous minister is forced to go on tv after Diabolik has blown up the country’s tax records and appeal to the public to come forward and pay the taxes they think they owe is absolutely hilarious.

The sets are amazing, especially Diabolik’s hideout, which manages to fill what looks like an entire soundstage with tube tunnels, lattices of girders, rock pools, tiered circular beds and wonderful ultra-modern showers that have hanging perspex circles to hide the naughty bits as John Phillip Law and Marisa Mell shower together.

Danger: Diabolik is based on a comic-book created by sisters Angela & Luciano Giussani, first published in a pocket-sized edition in 1962 and which continues to be published today, although this is not widely known in the English-language. There was also a further animated tv series Diabolik (1997-8) produced by Saban International, which lasted for 40 episodes.

Mario Bava’s other genre films are:- uncredited co-direction of Riccardo Freda’s I Vampiri (1957); the Gothic classic Black Sunday/The Mask of the Demon/The Revenge of the Vampire Woman (1960); the Greek muscleman fantasy Hercules in the Center of the Earth/Hercules vs the Vampires (1961); the giallo The Evil Eye (1962); the Gothic horror anthology Black Sabbath (1963); the Gothic horror Night is the Phantom/The Whip and the Body/What? (1963); the giallo Blood and Black Lace (1964) the Gothic Kill Baby … Kill/Curse of the Dead/Curse of the Living Dead/Operation Fear (1965); the sf/horror film Planet of the Vampires (1965); the spy comedy Dr Goldfoot and the Girls Bombs (1966), Bava’s worst film; the giallo Five Dolls for an August Moon (1970); the giallo films Hatchet for a Honeymoon/Blood Brides (1971) and Twitch of the Death Nerve (1971); the Gothic Baron Blood (1972); the giallo/haunted house film Lisa and the Devil/House of Exorcism (1972); and the possession film Schock/Beyond the Door II (1977).