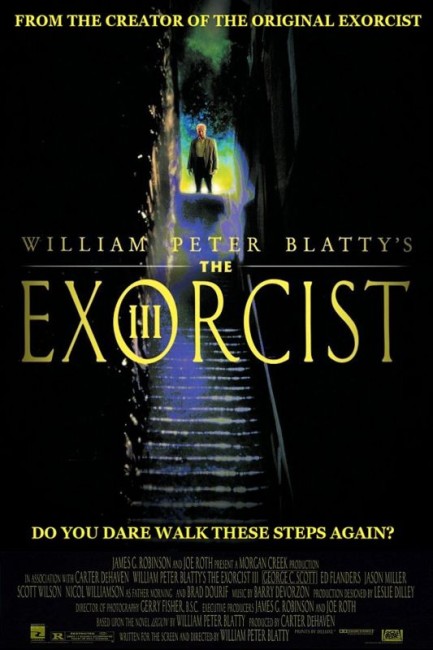 Police lieutenant William Kinderman is faced with a baffling series of murders in which each victim has been decapitated and their head replaced with the head from a marble statue of Christ. The killings emulate in every detail the m.o. of the Gemini Killer who was sent to the electric chair fifteen years ago. In investigating, Kinderman discovers his old friend Father Karras being held in a psychiatric ward. Kinderman realises that Karras is tormented and tortured by The Devil who keeps the spirit of the Gemini Killer alive inside him and forces Karras to watch as his own body is used to kill innocents.

Basing the film on his original novel sequel Legion (1983), Blatty abandons gross-out tactics altogether and plays the script as a theological detective story – one where the puzzle is solved by Kinderman’s finding faith. As a result, The Exorcist III emerges as a far better reworking of essentially the same story as The Exorcist – Kinderman’s finding of faith comes with far more emphasis and delineation of character compared to the same journey undergone by Ellen Burstyn in the original.

In a decade that almost entirely inured one to the power of a good scare, William Peter Blatty, in what most cynically predicted would only be another Roman numeral exploitation film, comes in an outside winner, conjuring a series of wild, outlandish theatre-rattling jolts. The dream sequence with George C. Scott moving through Heaven, which is presented as a Grand Central Station of sorts where the dead try to contact the living by radio, to find Ed Flanders with his head stitched on who turns to look at Scott and say “I’m not dreaming,” holds a strong kick. Or the moment where George C. Scott enters the vege ward and the camera pans upwards to show one of the patients scuttling about on the ceiling.

However, the scene that makes the entire audience jump is [PLOT SPOILERS] the one that follows a night-duty nurse around the ward as she checks on strange noises she hears. Mostly shot in a single wide-angle down the shaded ward corridor, one is startled out of their seats as she emerges from the room she has just checked, followed in complete silence by an alabaster-white winged figure. The camera suddenly slams into a medium angle up on the figure, revealing it to be one of the headless statues come to life. It is a genuine scare that has a truly fantastique wildness to it, no matter how silly it may seem when one thinks about it afterwards.

This was one of the choicest roles George C. Scott had in his later years. William Peter Blatty equips him with a daft sense of humour, which lights up Scott’s rigid Mt Rushmore face in the delivery. Brad Dourif gives a performance that is regrettably playing to the audience. However, Dourif is probably more in control of a role than he has ever seemed before (funny that he has to spend the entire film in a strait-jacket to do so – his only other really good performance was in One Flew Over the Cuckoo’s Nest (1975) and there he was confined to an asylum too). Blatty conjures a considerable chill out from the character’s dialogue, describing the joys of killing people and in keeping Karras trapped in his own body, watching as it is made to kill innocents.

It is ironic that the film’s only failing comes in trying to emulate the current crop of effects-heavy clones. The studio forced a new ending on the film after deciding the one that William Peter Blatty originally shot was too tame. However, it is a surprisingly wimpy display of effects and conversely only ends the film on an anti-climax. The new character of Father Morning, played by Nicol Williamson, added here is poorly developed and unnecessary. Among other things, the studio insisted on a return appearance of a character from The Exorcist, which is why Brad Dourif’s scenes are broken up by appearances of Jason Miller, which were added later. The studio also insisted on naming the film The Exorcist III, as opposed to William Peter Blatty’s preferred title of Legion taken from his novel. In 2016, Blatty released a director’s cut of the film, his original version, which is substantially different to the one released by Morgan Creek, although much of the original footage remains lost.

The other Exorcist sequels are Exorcist II: The Heretic (1977) and the subsequent Exorcist: The Beginning (2004). There is also Dominion: Prequel to The Exorcist (2005), the original version of Exorcist: The Beginning made by Paul Schrader that was dumped and reshot by the studio. The Exorcist (2016-8) is a tv series loosely based on the original featuring Geena Davis as a now adult Regan whose own daughter becomes possessed.

William Peter Blatty’s only other film as a director was the very strange black comedy The Ninth Configuration/Twinkle, Twinkle, Killer Kane (1980).