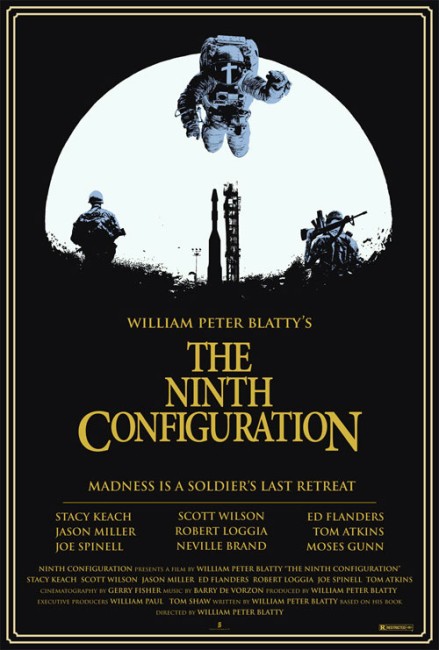 Colonel Hudson Kane arrives to take command of a psychiatric institution for military officers who have gone crazy during the course of duty that is housed in a castle in New England. His job is to decide if the men are genuinely crazy or merely derelict in their duty. Kane has unusually effective methods and is determined to change the men’s lives, particularly that of Captain Cutshaw, an astronaut who refused to go to the Moon. However, Kane also has a twin brother Vincent who is one of the most vicious killers in the military service, and is haunted by his existence.

The Ninth Configuration is an interesting, although not very well known film. It was the directorial debut of William Peter Blatty, who found acclaim several years earlier as writer/producer of The Exorcist (1973) and the 1971 novel it was based on. Blatty also based The Ninth Configuration on one of his novels Twinkle, Twinkle, Killer Kane (1978), which the film is sometimes also alternately known as.

The Ninth Configuration was not at all a success and was barely even released. That this was the case is not too much of a surprise. It is one of those films where all easy dramatic footholds have been abandoned and frequently leaves one with a sense of wondering what on Earth is going on. Perhaps the closest comparison one can make is to call it a version of One Flew Over the Cuckoo’s Nest (1975) as directed by Robert Altman – and Altman in his weirdly experimental stage around about the time of Brewster McCloud (1971).

There is a looming sense of absurdist humour that is often disorientating in the obliqueness of its delivery. Sometimes the results are hilarious – like Scott Wilson’s monologue about punishing a wall with a sledgehammer for it not moving its molecules to allow him to pass through; or droll lines about suicide pills with mild laxative side effects. Or Jason Miller, The Exorcist‘s Father Karras, who has appeared in all of William Peter Blatty’s films, who has an hilarious part about trying to stage Shakespeare with a cast of dogs.

When one settles into it, The Ninth Configuration becomes rather enjoyable in its own way. There is a remarkable twist reversal that comes in the middle of the story – one that William Peter Blatty has borrowed not a little from Edgar Allan Poe’s The System of Professor Tarr and Dr Fether (1845). Of course, as with The Exorcist, what one finds is that William Peter Blatty is not really making a horror film – or in this case an absurdist comedy – but a vehicle to carry a message about his Catholic faith. The script sidetracks off into often interesting arguments about faith. Stacey Keach ultimately becomes a bizarre analogue for Jesus Christ, wherein he comes to sacrifice himself so that Scott Wilson can believe and at the end delivers proof of the existence of an afterlife.

In an equal sense, The Ninth Configuration is, without William Peter Blatty even perhaps realising it, a film about deliverance from the social shock that the Vietnam War delivered to the American zeitgeist. This is a film about Post-Vietnam Stress Disorder made before the term was even coined!!! Although interestingly, the film does not take the position held since that the horrors of the War caused enormous traumatic stress, but rather sits wondering why so many people became insane and if they are faking it. On a wider level, The Ninth Configuration is a film about finding delivery from the mass insanity the Vietnam War induced on every level of American society and William Peter Blatty’s belief that the solution to the sense of social loss can be found in faith.

The only other work William Peter Blatty has subsequently written or directed to date is the greatly underrated The Exorcist III (1990), which is arguably a better film than The Exorcist was.