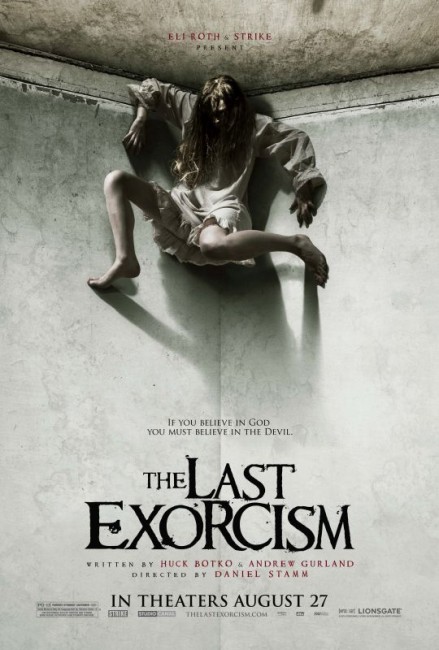 A documentary crew follow Reverend Cotton Marcus, a professional exorcist. Marcus has grown up as a minister in his father’s church in Baton Rouge where he came to specialise in exorcisms. He no longer believes in the actuality of possession but continues to perform exorcisms because he needs the money for his family, justifying what he is doing as offering psychological help to people. To show the documentary crew that it is all nonsense, he agrees to conduct a deliverance in Ivanwood, Louisiana. He and the film crew travel to the Sweetzer farm where the traditional minded father Louis believes his sixteen year-old daughter Nell is possessed and responsible for slaughtering his livestock. Marcus sets up an exorcism, rigging Nell’s room with wires, cheap effects and hidden recorders that play animals noises. After giving a highly theatrical performance, he proclaims her delivered. However, that night, an unbalanced Nell turns up at his motel room. Believing her problems to be psychological, Marcus tries to get her medical help. As they return to the farm, Nell’s behaviour appears increasingly more disturbed as she slashes her brother’s face and draws pictures of the film crew being slaughtered. Insisting that the cause is mental not demonic, Marcus tries to get to the bottom of what is happening.

Ever since the groundbreaking approach taken by The Blair Witch Project (1999), the Found Footage film – a dramatic film that is made to appear as though it is film footage shot by handheld camera or a documentary crew – has become a flourishing genre. We have seen number of other films take this approach on board where a variety of different genre themes have been given the Found Footage treatment – the snuff movie thriller in The Great American Snuff Film (2003) and Amateur Porn Star Killer (2007); the monster movie in Incident at Loch Ness (2004), Cloverfield (2008) and The Tunnel (2011); the ghost story in Paranormal Activity (2007), Lake Mungo (2008), Gacy House (2010) and Haunted Changi (2010); the zombie film in Diary of the Dead (2007) and [Rec] (2007); alien visitors in District 9 (2009) and Apollo 18 (2011); the stalker film in Evil Things (2009) and 388 Arletta Avenue (2011); the UFO film in The Fourth Kind (2009) and Area 51 (2015); ecological catastrophe in The Bay (2012); psychic powers in Chronicle (2012); the vampire film in Afflicted (2013) and Black Water Vampire (2014); the Frankenstein film in The Frankenstein Theory (2013) and Frankenstein’s Army (2013); Satanic impregnation in Devil’s Due (2014); the time travel genre in Project Almanac (2015); even Japanese monster movies and superheroes in Big Man Japan (2007) and fairytale trolls in The Troll Hunter (2010). As one can see, a number of standard genre themes have found a new life, being reinterpreted via this approach. The Found Footage approach has also been used by a great many other works outside the genre – everywhere from the sitcom in tv’s The Office (2001-3), the Gulf War film in Redacted (2007), the frat boy comedy in The Virgin Hit (2010), even fictional political assassination scenarios in Death of a President (2006), not to mention works like Borat: Cultural Learnings of America for Make Benefit Glorious Nation of Kazakhstan (2006) and Brüno (2009) that exist in entire categories unto themselves. Around the same time, there were several other exorcism and possession Found Footage films with Chronicles of an Exorcism (2008), Anneliese: The Exorcist Tapes (2011), Back from Hell (2011), The Devil Inside (2012) and The Atticus Institute (2015).

The Last Exorcism comes from German-born director Daniel Stamm. Stamm had previously made one other feature film, also a mockumentary, with A Necessary Death (2008) about a filmmaker trying to elicit someone to commit suicide on camera for his documentary. In both of these, the actors are complete unknowns to add to the sense of authenticity. Stamm also takes the approach begun with The Blair Witch Project of naming almost all of the characters after the actors playing them. The Last Exorcism is produced by Eli Roth, the cult splatter director behind such films as Cabin Fever (2002), Hostel (2005) and The Green Inferno (2013).

The Last Exorcism was an unknown before I sat down to watch it. The approach seemed to be essentially that of taking The Exorcism of Emily Rose (2005) – a film that tried to convince us that exorcism was a factual phenomenon and what we were seeing was a dramatisation of an incident that had actually occurred – to an even greater level of (pseudo)-realism. (Perhaps even more than Emily Rose, the film that The Last Exorcism reminds of in terms of its set-up is Blackwater Valley Exorcism (2006), which was designed a low-budget copy of Emily Rose, while the film’s swaying between supernatural and psychological explanations reminds of Requiem (2006), which was designed as a riposte to Emily Rose). That said, the only thing the Found Footage approach seems to offer the well worn demonic possession and exorcism genre is the novelty of stylistic approach. However, once one sits down to watch The Last Exorcism, this is anything but what transpires. It seems to set out to constantly subvert everything that one expects of an exorcism film.

As the film opens, we are introduced to Patrick Fabian’s minister. Watching him in the midst of his church, conducting a full flight of holy-rolling charismatic evangelism, you wonder what possible territory the film is taking us into – whether it has abandoned the Catholicism preferred by every exorcism film since The Exorcist (1973) and is taking evangelical Christian nonsense seriously – and especially whether this is a worldview that one is going to have to accept if one is to buy into the film’s reality (as Emily Rose secretly wanted us to do).

However, as Marcus is interviewed and we get to know him, it becomes increasingly apparent that he is a charlatan. We first see him, perhaps innocuously, demonstrating the use of magic tricks in his sermons – but then comes a scene where he claims that he could say anything to his flock whereupon we see him proving this by winding a recipe for banana bread into his sermon. Soon after, he starts confessing that he does not believe in exorcism and only does it as a form of therapy to help people who do believe, while also explaining how he continues to do so to provide for his son’s medical bills.

As we start out to travel to Ivanwood, we have reached the point where Patrick Fabian announces that he is going to conduct the exorcism to prove that such phenomena do not exist. This goes waaaaay beyond Jason Miller in The Exorcist – a priest who was struggling to believe again because he had lost his faith to a pastor who has lost his faith long ago but has been continuing to practice exorcisms as a scam for money. Where Jason Miller wanted it to be true, Patrick Fabian’s priest sets out to assiduously disprove the reality of it.

This however does not prepare us for what we get when it comes to the actual exorcism. There is a scene where Patrick Fabian gets everybody to close their eyes and pray over Ashley Bell and suddenly the pan of water that her feet have been placed in starts to boil. We are astounded by this as the last thing we expect given such a lead-up is an apparent manifestation. When Caleb Landry Jones accuses Patrick Fabian of faking it afterwards, we are not sure whether we believe this or not – we did see Fabian put something in his pocket and maybe reach in just before praying but both shots were so brief we cannot be sure what we saw. However, in the next scene, we are flabbergasted as we see Fabian in Ashley Bell’s bedroom, hooking up wires and then testing the posts of her bed while commenting “This’ll shake nicely.” The exorcism is intercut with scenes where we see Fabian preparing his magic tricks – batteries and wires that run down his sleeve to deliver electric shocks via his rings, hidden noise recorders to project the sounds of animal-like roars, even a crucifix with a chemical hidden in the back that causes it to start smoking.

A character like this comes with a predictable arc where you can see that they are being set up to be faced with the actuality of what they are pretending is true. Even here, The Last Exorcism is constantly confounding expectation. Predictably, Patrick Fabian is dragged back in again after he leaves. There he is in the amusing situation of having to deal with a real rather than faked outbreak of phenomena and the exact opposite position he was in earlier where he was defending it as real but is now rigorously declaiming everything as being down to psychological behaviour. With black regard, we see the things that Fabian has insisted earlier being revisited on him – when mention of the pregnancy comes up, Louis Herthum immediately believes it was the demon that Fabian claimed was defiling Ashley Bell and reaches for his shotgun.

Right up until the very end, the film keeps doing the old The X Files (1993-2002, 2016-8) trick of vying between paranormal and purely mundane explanations for things. The film sits ambiguously between these dual explanations, although contrary to expectation there is never any scene where Patrick Fabian changes his mind and realises that he was wrong. The only part that did not work for me [PLOT SPOILERS] is the ending, which seems to contradict the expectations that Ashley Bell is demonically possessed and introduces a left field element about a Satanic conspiracy where I am afraid I did not fully understand how this related to or explained Ashley’s apparently possessed behaviour.

I was amazed at The Last Exorcism. I went in with unsure expectations and found a film that kept one off edge with a constant series of twists, turns and surprises. Daniel Stamm creates an enormous degree of spooky tension out of the Found Footage approach – far more so than one would have thought possible. In the last third, Stamm creates some genuinely unnerving manifestations with Ashley Bell simply standing in the hallway, crouched or hiding on top of cupboards, leading to a disturbing scene in the barn where Patrick Fabian attempts a second exorcism and confronts the force inside her as it twists and torments her body while taunting his disbelief.

The performances in the film are all completely convincing. Patrick Fabian nails the snake oil salesman charisma of a rural preacher extremely well, yet at the same time does the difficult job of remaining openly guileless and the sympathetic force of the show. Ashley Bell conjures a perfect vision of unworldwise backwoods innocence. As the brother, Caleb Landry Jones gives an alarmingly mercurial performance where you are not sure where he is coming from one moment to the next. The scene near the beginning where he gives directions and then abruptly tells them to leave, before he starts throwing things at the vehicle, holds a considerable jolt that forebodes much for what is to come.

The Last Exorcism Part II (2013) was a sequel with Ashley Bell now as the central character, which lacks any of the effect or cleverness that this does, and even abandons the Found Footage approach.

Daniel Stamm next went on to make 13 Sins (2014) about people engaged in a series of increasingly more extreme challenges and has since been working in episodic television.

(Winner in this site’s Top 10 Films of 2010 list. Winner for Best Actor (Patrick Fabian), Nominee for Best Original Screenplay at this site’s Best of 2010 Awards).