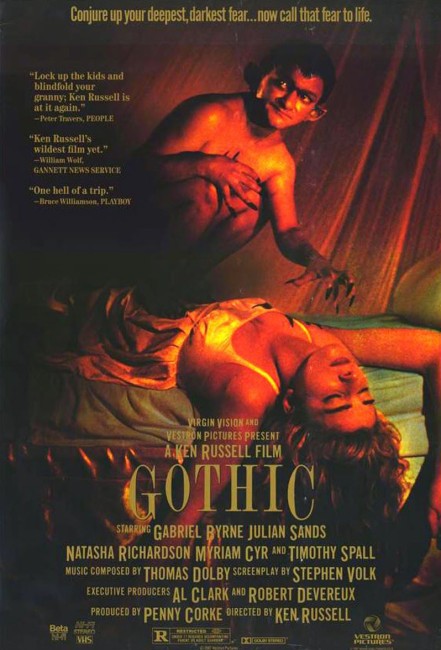 1816. The poet Percy Shelley goes to visit fellow poet Lord Byron who lives in self-imposed exile at the Villa Deodati on the shores of Lake Geneva. Shelley takes with him his lover Mary Godwin and her half-sister Claire. While there, Byron urges them to seek madness and inspiration in the name of free love, free thought and defiance of religion. They take turns reading from a book of horror stories. On impulse they decide to hold a seance around the skull of a mediaeval monk Byron has found where Byron urges them call out their greatest fears and give them life. However, for each of them this brings into existence a greater horror than they imagined.

The late Ken Russell was always one of the demented holy fools of filmdom. His films launch in with an over-the-top theatricality and a schoolboyish fascination with outraging his audiences. Russell was capable of rising to inspired heights – some of his literary adaptations and famous composer biographies like Women in Love (1970), The Music Lovers (1970) and The Devils (1971), even one is prepared to argue, the hallucinatory poetry of Altered States (1980). Ken Russell was usually at his most entertaining when given his head and allowed to go nuts – the likes of the totally whacko adaptation of The Who’s rock opera Tommy (1975) or the inspired psycho-sexual comedy Crimes of Passion (1984).

However, by the end of the 1980s as Russell entered his sixties, it was all starting to seem a little silly and with Gothic and his next film, The Lair of the White Worm (1988), the attempts to be deliberately silly were, well, just silly. Other than the sharp-witted Whore (1991) and the little-seen staggeringly awful Uri Geller biopic Mindbender (1996), Russell almost entirely dropped off the cinematic radar in the 1990s and beyond up until his death in 2011.

Gothic was one of a mini-spate of films that came out around the same time concerning themselves with the famous meeting between Lord Byron, Percy Shelley and Mary Shelley at the Villa Deodati in 1816, which gave Mary the inspiration to write Frankenstein (1818) and Byron’s physician John Polidori to write The Vampire (1819), which were both key works in 19th Century horror. Other films centred around the Villa Deodati Writer’s Workshop included the more serious (and rather dull) Haunted Summer (1988), the obscure Spanish-made Rowing with the Wind (1988) with a miscast Hugh Grant as Byron, and Roger Corman’s Frankenstein Unbound (1990), which had time-traveler John Hurt encountering both Mary Shelley, Frankenstein and his monster, while it also features in the biopic Mary Shelley (2017).

There is a good idea somewhere at the heart of Gothic, one that deals with the conjuration of the group’s individual fears – Mary’s grief over her lost child, Shelley’s defiance of religion, Polidori’s frustrated homosexual desire for Byron – and how each of these becomes a monster that influenced the names that were present at the Villa Deodati. You could see the same idea making for a good play someday.

However, any serious airing it is going to get is hijacked from the start by Ken Russell in lunatically OTT mode. Right from the first scene, Russell lets go at it with dogs chasing maids around the garden and encroaching thunderstorms. He then goes on to pile on an amazing array of demonic imps, silver servers full of eels, nipples with eyes, ghosts in suits of armour with giant iron codpieces, menstrual blood-drinking scenes and Myriam Cyr covered only in cobwebs eating rats. Synthesizer whiz kid Thomas Dolby’s score shrieks and thumps in the rafters like a hyperactive thunderstorm. Most of the cast go like the clappers as though in a competition to exceed the other for the most eye-rolling performance. However, it is a storm in a teacup that gets amazingly frenzied about not much at all.

Ken Russell has assembled an appropriate cast of over-actors – Julian Sands, Timothy Spall and Myriam Cyr – who at least match Russell’s direction with their performances. One of the film’s more lunatic images is that of Julian Sands naked on the roof in the middle of a lightning storm shouting out defiance to nature. Gabriel Byrne certainly makes an appropriately dark and charismatic Byron. Natasha Richardson is a haunted and beautiful Mary, although she seems simply too glamorous and beautiful for the part – the surviving portraits of Mary show her as someone small, mousy and almost certainly haunted by a sad life.

The historical authenticity of the film is also somewhat doubtful – for one, it was Byron that visited Percy Shelley, not the other way around. Moreover, the title seems erroneous – while two of the most influential Gothic horror works – namely Frankenstein and Polidori’s The Vampire – came out of the summer, Shelley and Byron were not what one could Gothic writers at all – the Gothic movement was pro-superstition, pro a kind of theatrical horror and anti-reason, while Byron and Shelley were vigorous proponents of reason and man as God.

Ken Russell’s other genre films are:– the spy film Billion Dollar Brain (1967); the historical possession and witch persecution film The Devils (1971); the surreal and quite deranged adaptation of The Who’s rock opera Tommy (1975); the science-fiction film Altered States (1980); the psycho-sexual thriller Crimes of Passion (1984); the campy Bram Stoker adaptation The Lair of the White Worm (1988); the abysmal Mindbender (1996), a biopic of the psychic fake Uri Geller; The Fall of the Louse of Usher (2002), Russell’s demented home movie riff on Edgar Allan Poe; and an episode of the horror anthology Trapped Ashes (2006).