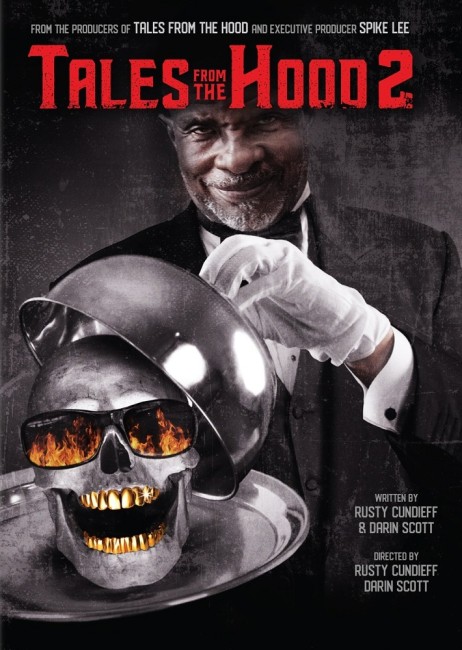 Portifoy Simms is hired by Dumass Beach, CEO of a private prisons company, who wants him to tell a series of stories to help their new law enforcement robot to learn the concept of right and wrong. Good Golly:- Audrey visits the Museum of Negrosity and becomes set on having one of the gollywog dolls despite the owner informing her of what a racist caricature it is. She decides to break in at night and steal a gollywog from the case but this has unintended consequences. The Medium:- Cliff Bettis is tortured by Brian and his gang members for the whereabouts of his drug money but they end up accidentally killing him. Brian then comes up with the idea of taking celebrity medium John Lloyd hostage. At gunpoint, they force John to contact Cliff’s spirit. Date Night:- Ty and Kahad think they have found hot Tinder dates in Carmen and Liz – only to discover that the girls are vampires. The Sacrifice:- In Louisiana, Henry Bradley stands up to support conservative politician William Cotton. Henry then abruptly finds himself in an alternate timeline where the Civil Rights movement never happened and he, a Black man, is rejected by his white wife and beaten by former colleagues. His parents implore him to see the ghost of Emmett Till calling to him and to recognise the sacrifice that Till made for the advancement of his rights.

The horror anthology Tales from the Hood (1995) has gained a modest cult reputation over the years. Its’ distinction at the time was that it was made by African-American filmmakers and all of its horror stories were set around African-American issues. Twenty-three years later, original director Rusty Cundieff returned with this sequel. Co-directing, producing and writing alongside him is Darin Scott, who also produced and co-wrote the original. Also present again is Spike Lee who acted as Executive Producer and produced the original through his 40 Acres and a Mule production company.

The first full episode, Rusty Cundieff’s Good Golly, is a variant on the killer doll theme of the KKK Comeuppance episode from the original. The episode is by the book and does nothing to vary from a standard killer doll theme. However, what propels it into the watchable is Lou Beatty Jr. giving a blisteringly spirited lecture on racial stereotyping and how the gollywog represents a long history of racial oppression. The film does end on the grotesque image of self-centered white girl Alexandra DeBerry being raped by a gollywog and then giving birth to dozens of them.

All of the episodes here, excepting perhaps The Sacrifice, should be noted as being familiar warmed over genre tropes. Darin Scott’s The Medium starts well with the killing of a former pimp by a gang wanting his money. The twist comes as medium Bryan Batt is recruited to conduct a séance and contact the pimp’s spirit to find the whereabouts of his money. The story is unexceptional except for Batt, best known for tv’s Mad Men (2007-15), letting all stops go in his performance, including mimicking the various voices of gang members’ victims at the end before being taken over by the dead man.

It is easy to tell which episodes are Rusty Cunfieff’s as these are the most politically charged. This is a Tales from the Hood that has been dragged into the era of contemporary politics, as can clearly be seen in the wraparound segments with CEO Bill Williams Martin sexually harassing subordinates and making jokes about Black Lives Matter. This is particularly the case with the last and longest episode The Sacrifice.

For a long time, I wasn’t sure where this episode was going. The story alternates between a modern African-American politician (Kendrick Cross) and what becomes apparent is two young men being hounded by racist Louisiana cops in the 1960s. Kendrick starts to see ghosts and then wakes up to find he is in an Alternate History where the South never de-segregated following Emmett Till’s death and he is still called “boy” and placed under arrest by Klan-operated police for impregnating a white woman. There seems much potential here but disappointment is that Cundieff is more interested in making a point about the modern Black politician getting into bed with the conservatives than he is in teasing out the alternate history aspects, otherwise we might have had something that approached the brilliance of another C.S.A: The Confederate States of America (2004).

What killed much of the film for me is the end where we finally meet the ridiculous looking law enforcement robot and it proceeds to go amok, a sight that looks so absurd it torpedoes the film. Moreover, we also get a coda that reveals a wildly over-acting Keith David is The Devil.

Rusty Cundieff and Darin Scott went on to make a further sequel with Tales from the Hood 3 (2020).

Outside of the Tales from the Hood films, Rusty Cundieff has mostly worked in comedy television. Darin Scott has also directed Dark House (2009), American Horror House (2012), Something Wicked (2014) and Deep Blue Sea 2 (2018). Cundieff and Scott also co-directed another horror film with Mr Malevolent (2018).