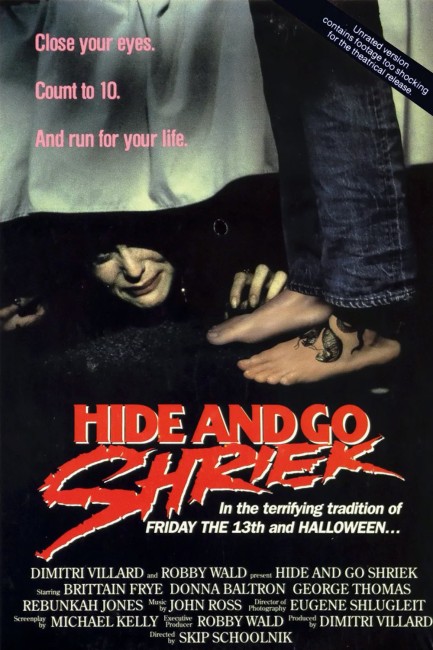 A group of eight teenagers sneak in to the furniture store owned by John Robbins’ father. They wait until the store has closed for the day and come out intending to hold their own graduation party overnight. However, a killer is also in the store and begins eliminating their numbers.

Hide and Go Shriek is another entry from the 1980s heyday of the slasher film. The slasher genre began with the massive hits of Halloween (1978) and Friday the 13th (1980). These brought a deluge of low-budget copycats and the fad peaked and was fairly much over by 1983. When Hide and Go Shriek was made in 1988, it was a straggler of the cycle and consigned to VHS oblivion. (For a more detailed overview of the genre see Slasher Films).

The idea of a slasher film located in a furniture store seems a somewhat limited concept. However, I decided to go with it. Certainly, there did seem to be a brief fad for films using various stores after hours around the end of the 80s slasher cycle – there was The Initiation (1984) set in a mall, the Australian Dangerous Game (1987) set in an after-hours department store and Intruder (1989) set in a supermarket. Given this film’s low-budget nature, you get the impression that this was a location the filmmakers have managed to obtain use of and then built a film around it.

Director Skip Schoolnik made his directorial debut here. He had previously worked as an editor, including cutting Halloween II (1981), among others. He has never gone on to direct any other films but has since become a prolific tv producer on shows such as Angel (1998-2004), The Walking Dead (2010- ) and Salem (2014-7), among others.

Perhaps due to Schoolnik’s lack of experience behind the camera, Hide and Go Shriek is relatively crude directorially. It is often filled with lame red herring jumps consisting of people jumping out yelling and the like. All of the slashing and stalking scenes are fairly much by the playbook that the genre had well and truly established by 1988. The film’s one novelty death scene is when Annette Sinclair is trapped on the roof of the elevator cage and then decapitated as the elevator reaches its floor.

The film’s one amusement is the revelation of the identity of the killer. [PLOT SPOILERS] Throughout suggestion has been built up that this is Jeff Levine, the ex-con who has been employed as general help and lives out the back of the store. The twist at the ending reveals the killer is actually Scott Kubay who was Levine’s gay jail cell lover and has come back believing they had a thing going and eliminating all others in the way (plus a hooker in the opening scenes) in order to be with him again. The ridiculous amusement of this is that when we first see Kubay he comes outfitted in mascara and leather bondage gear. He blows a kiss to the teens before tripping and falling to his apparent death down the elevator shaft (although the cliche twist fadeout reveals that this is not the case).