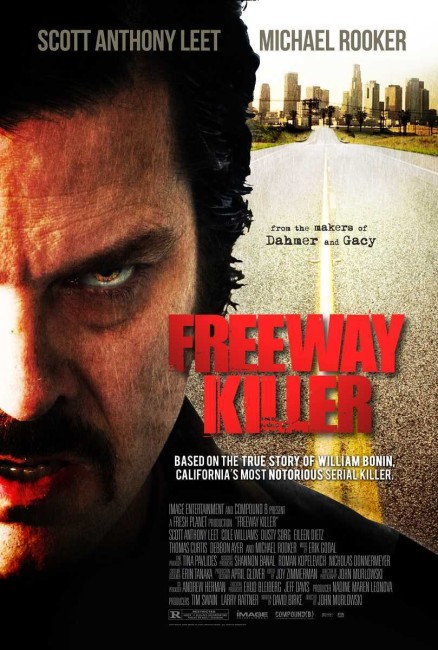 1979-80. William Bonin prowls the Los Angeles area in a panel van, picking up young men and violently strangling them before dumping their bodies on the side of the freeway. He picks up Kyle Peterson but instead of killing him regards him as a kindred soul and introduces him to his first kill. Bonin also introduces Kyle to his friend and fellow killer Vernon Butts, although there is rivalry when Vernon sees that Bonin prefers Kyle’s company to his. As Kyle becomes complicit in the series of killings that the press nickname The Freeway Killer, there is strain in the relationship between him and Bonin.

William Bonin (1947-96) was an American serial killer. Bonin grew up in Connecticut with a highly abusive childhood. He served a tour of duty in Vietnam in the US Air Force for which he was awarded a medal. Returning and settling in California, Bonin found employ as a delivery truck driver. In 1979, he began his spate of killings where he would pick up usually teenage boys, either offering the enticement of drugs and alcohol or abducting them by force, where he would rape them and then usually strangle them before dumping their bodies along the side of the freeway. This earned him the nickname The Freeway Killer. Bonin was often accompanied by other youths he had inveigled to join him. Bonin was arrested in 1980 after William Pugh, one of his accomplices, was arrested for stealing a car and confessed. Bonin was convicted of fourteen murders (although the actual number is more like 21) and executed by lethal injection in 1996.

Freeway Killer is one of these true-life serial killer films that has been made on a low-budget. It makes reasonable effort to approximate the details of the case – Bonin cruising in his Ford Econoline van; Vernon Butts and his claims to be a magician; most of the circumstances of the eventual arrest of Bonin – although it also cuts and simplifies some of the details. The character of Kyle Peterson seems to be a composite of Bonin’s off-siders (principally Gregory Miley as well as James Munro, both teenagers who were drawn into Bonin’s circle and encouraged to participate). Kyle’s preference to be with his girlfriend would appear to be a fiction created by the film.

The most egregious change made to the film is that it waters down William Bonin being gay. This may well have been because the film didn’t wish to portray graphic scenes with Bonin raping young men. Or equally that this was watered down so that the film could play in conservative Middle America. It is not that this element is entirely omitted – you can see it in the scenes where Scott William Leet is trying to lure Cole Williams away from his girlfriend – but for an authentic film this should have been put in centre place.

Certainly, Scott William Leet nails the role of Bonin with a dangerous charisma that explodes over into unstable violence. In the scenes of unpredictability and his playing his associates off against each other, he gets the complex undertow of psychology. The material available about the real Bonin is scanty but these scenes have the feel of believable psychology. The only recognisable name present is Michael Rooker who plays the lead detective – which is perhaps a homage in that Rooker came to fame playing another true-life serial killer in Henry: Portrait of a Serial Killer (1986).