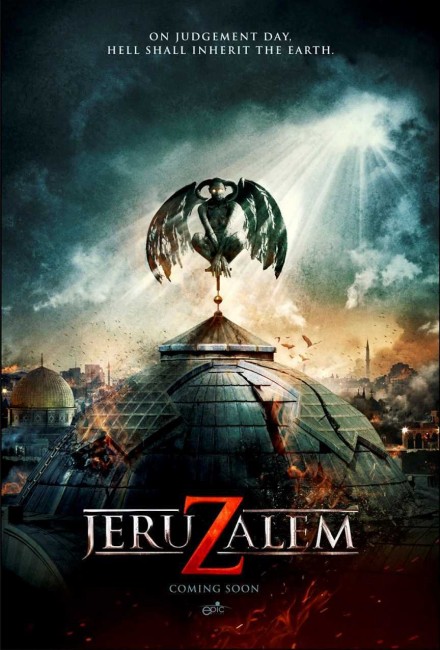 Sarah Pullman and Rachel Klein depart the US for a holiday in Israel. Sarah’s father gives her a pair of internet-enabled glasses to record the trip and communicate home. On the plane flight, the girls meet cute guy Kevin Reed, a student of religious myth, who persuades them to abandon their planned destination of Tel Aviv and head for Jerusalem. They sign into a hostel and take a tourist tour. Kevin becomes obsessed with something he believes is about to happen that night so much that he has to be hospitalised. He is proven correct that evening, the night of Yom Kippur, as the city comes under attack by winged demon creatures. Sarah and Rachel try to make it through the city to safety. All around them, the creatures attack and possess people, while a military cordon closes off all exits from the city.

Jeruzalem was the second film from the Israeli Paz Brothers, Doron and Yoav. They had previously made the non-genre Phobodilia (2009). Jeruzalem proved a reasonable success for them and played at numerous horror and fantastic film festivals around the world.

Jeruzalem is a Found Footage film. (See Found Footage Films). It takes the unique perspective of being filmed from the perspective of a girl (Danielle Jadelyn) wearing a pair of internet accessible glasses. (You presume these are Google Glass, although this is never specified and the technology present is so advanced to nominally classify the film as science-fiction). This places Jeruzalem into the same vein as a bunch of recent films such as The Den (2013), Open Windows (2014) and Unfriended (2014) in which the computer screen becomes the film screen as we see it constantly interrupted by a plethora of video windows, chat sessions, drop-down menus, information searches and text messages.

Jeruzalem works fairly well – even in a field that is becoming as tediously played out as Found Footage genre. With its labyrinth of enclosed streets and multi-cultural mix, Jerusalem makes for a fantastic location. Even the Israeli actors cast as Americans come across as reasonably convincing. The Paz Brothers absorb you in the journey of the two girls and take their time before allowing the horror element to erupt. Thereafter the film delivers a solid and satisfying run through.

The only frustration of the film is that you spend much of the running time trying to work out what the threat is – The Paz Brothers seem to be trying to make a possession, a fallen angel and a zombie film all at once. The various explanations we get from Yon Tumarkin’s Kevin give the idea of whatever it is being something that lies at the core of all world religions that emerges at Yom Kippur. What we see looks like zombies/possessed figures with wings, which are seen circling around the city in flight in a couple of scenes. Although in practice, the Paz Brothers never do too much more than cycle through a bunch of zombie and possession/infection cliches without alighting on any one explanation in particular.

The Paz Brothers have announced a sequel Jeruzalem 2. They next went on to conduct a reinvention of the golem legend with The Golem (2018).