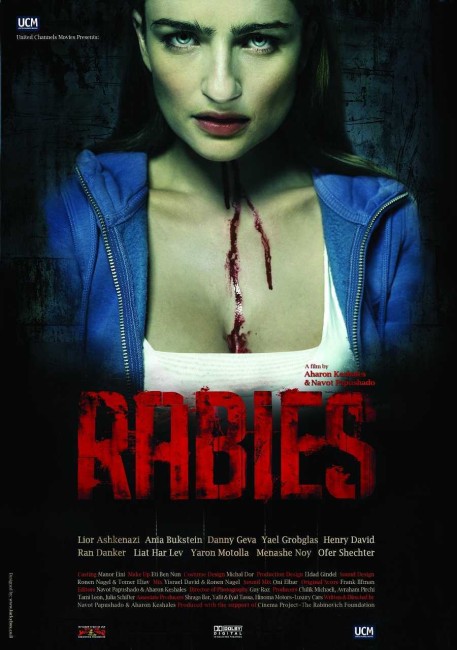 Brother and sister Ofer and Tali are imprisoned in the forest by a serial killer. Ofer manages to make an escape and leaves Tali behind while he goes to find help. Meanwhile, two guys, Mikey and Pini, and two girls, Shir and Adi, are driving to a sports match but become lost. Ofer then runs out in front of the car and is hit. He begs help and Mikey and Pini agree to accompany him back to rescue Tali. She meanwhile has managed to escape and is found unconscious by Menashe who takes her back to his caravan in the forest. Meanwhile, Shir and Adi have called the police for help. The call is answered by two patrol officers Danny and Yuval. However, Yuval has disturbed tendencies and frisks the girls in a sexually intrusive way, pushing Shir to grab his gun and turn it on him. These various situations all explode into violence and bloodshed.

Rabies had the distinction of being the first horror film made in Israel. It was a directorial debut for Aharon Keshales, a former film critic and blogger, and Navot Papushado. The two subsequently went on in the horror genre to make Big Bad Wolves (2013) in which a detective tortures a suspected child killer and the F is for Falling segment of ABCs of Death 2 (2014).

The title automatically makes you think you are in for watching some kind of infection and outbreak drama, which does not turn out to be the case. After watching the film, I ended up confused as to why it was called Rabies other than perhaps the loose assumption that it is about people suddenly becoming violent and presumably demonstrating rabid-like symptoms.

For all that it is called the first Israeli horror film, I have some difficulties in categorising Rabies as a horror film. There is a serial killer and an abducted woman in the forest but these are not what the film is about per se. Rather what we have is more like an ultra-violent variation on a conte cruel – a film that has been intended to put the screws on a crosscut of characters and keep twisting them with merciless regard.

The film sets up a range of characters – four preppie friends on their way to a sports match, the brother and sister escaping from a serial killer’s den, the couple who are rangers (?) in the woods, two cops on duty – and delights in providing a series of almost sadistic twists at every opportunity. The guys’ walk in the woods has one of them caught in a bear trap; when the girls venture into the woods, they walk onto a minefield; the call to the cops brings the abusive Danny Geva who promptly throws the girls up against the car to frisk them where he begins sexually molesting Yael Grobglas before she pulls his gun on him. In these latter scenes, the impossibly handsome Danny Geva gives an alarmingly disturbed performance.

Keshales and Ppushado did exactly the same thing in Big Bad Wolves – created a torturous situation and kept putting the screws on characters with ruthlessly nasty regard. Some of the twists at the ending – like where [PLOT SPOILERS] Liat Har Lev is found by boyfriend Henry David who promptly kills her rescuer Meshashe Noy, thinking he is her abductor, or as police officer Lior Ashkenazi finally receives the phonecall back from his estranged wife only to get hit by gunfire, are particularly grim and brutal.