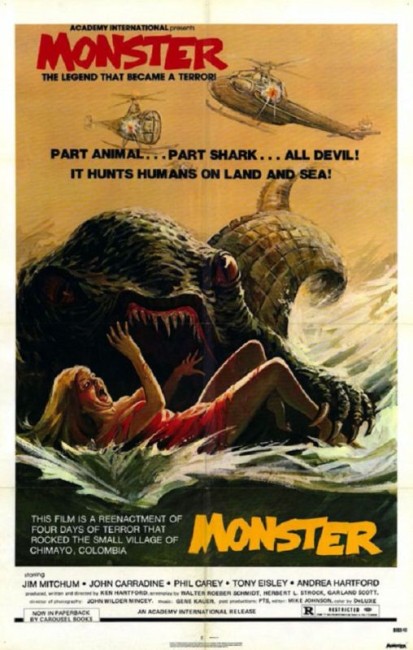 aka Monstroid: It Came From the Lake

Bill Travis is sent by American head office to investigate problems at the Dorato Cement Plant in Chimoyo, Colombia. There he finds the plant plagued by the efforts of an activist protesting against the pollution of the nearby lake and a series of deaths in the area. They are then forced to deal with a monster that emerges from the lake.

Monster – not to be confused with Monster (2003), the high-profile Aileen Wuornos biopic of the same name – was a very cheap and undistinguished film that nobody saw when it came out. It does have an interestingly mangled genesis as it comes with competing claims as to who directed it. The listed director is its writer and producer Kenneth Hartford, one of four films he would direct alongside Daughter of the Sun God (1972), The Lucifer Complex (1978) and Hell Squad (1986), as well as producing the short-lived anthology tv series 13 Demon Street (1959-60), The Devil’s Messenger (1961) and writing The Spectre of Edgar Allan Poe (1974).

However, B-budget director Herbert L. Strock, known for films such as Gog (1954), I Was a Teenage Frankenstein (1957), Blood of Dracula (1957), How to Make a Monster (1958), The Devil’s Messenger and The Crawling Hand (1963), claimed in a 1984 interview in Fangoria magazine to have directed the whole film but for a few scenes that were later added by Hartford. This is something that was backed up by cast members. It is not entirely clear how much Hartford directed – certainly, you would have to include the scenes with the two teenagers examining the lake as these feature Hartford’s own children. The main argument against Strock’s claims that Hartford took all the credit are simply the question of why would anybody go out of their way to want to be responsible for such a crappy film.

Monster is dull in every conceivable regard. There are lots of scenes milling around the town discussing the situation, numerous subplots involving love affairs, an indigenous saboteur and the teenagers conducting their own investigation of the lake, even a plot where town priest John Carradine leads the fearful locals as they decide to burn a woman they believe to be a witch at the stake.

A contemporary film like Piranha (1978) or Humanoids from the Deep (1980) could have enlivened these scenes but Kenneth Hartford/Herbert L. Strock leave them as dull and uneventful. The film circles around a host of big themes from the era – business exploiting a poor town, pollution that may have created the monster – but seems unattuned to even making a token attempt to dramatically use these issues Even John Carradine – one of the most prolific B movie actors of this era and who turned up in some total shit in search of a paycheque – is wasted in a role of little significance.

The film also makes the claim that it is based on a true incident that occurred in 1971 but does nothing to substantiate this or make what takes place seem believable – there is no explanation ever offered for the monster’s existence or explanation as to why, if it lives in the lake (as you end up assuming), it chooses to emerge only now.

However, even if all of this were remotely interesting, the entire film falls apart when it comes to the revelation of the monster. It looks completely ridiculous, like something from a Z-budgeted 1950s film, not from the same era that produced something as sophisticated as Jaws (1975). It is like a Loch Ness wannabe that was too cheap even for a Larry Buchanan film and ended up here. It makes several appearances at the end as an immobile giant-sized mock-up that rears out of the water with ridiculous green skin and yellow eyes. And every moment is it there on screen during the extended climax is one where Monster sinks further down into bad movie stakes.