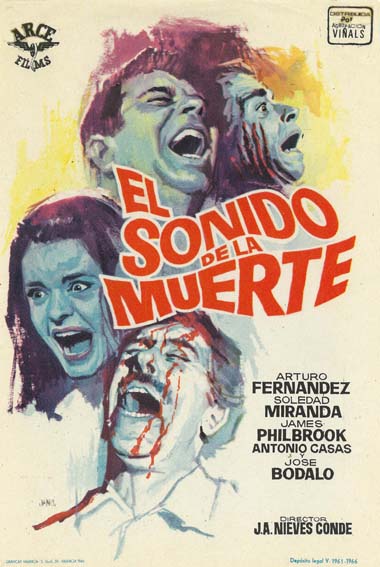 A group of archaeologists congregate on a cave in the Greek mountains with two halves of a treasure map, seeking a great fortune in gold that is supposed to be buried there. The locals hold the valley is fear and will not enter. Their blasting in the cave uncovers a mummified body. They are then attacked by something that emits an unearthly sound and claws members of the party to death. They realise they have managed to uncover an invisible monster.

There have been films about invisible monsters and unseen threats before. Val Lewton’s Cat People (1942), the classic ghost story The Haunting (1963), which came out just before this, and to some extent Night of the Demon/Curse of the Demon (1957) all featured monsters that were never seen, only suggested. In showing little or nothing, each in their own way became masterpieces of psychological, suggested horror. This is certainly a fantastic legacy for any film to be following.

You could also point to Forbidden Planet (1956) as another classic that features a monster that is literally invisible. The more likely comparison with Sound of Horror though is Invisible Invaders (1959) where the invisibility of the invading aliens proved a convenient means for a low-budget film to crimp on providing effects (although it should be said in the case of Invisible Invaders that this nevertheless resulted in a watchable film). Sound of Horror offers up invisible monster – some genre works insist on referring to it as an invisible dinosaur, although there is nothing in the film that suggests the creature’s origin is prehistoric (or for that matter explains it at all).

It is hard to think of another film in recent memory I have watched that is so mind-numbingly dull and boring as this. People seem to sit around the house in the valley talking for almost the entire film. Some of these conversations seem to go on and on without direction – in particular, a long scene where driver Arturo Fernandez talks about his other car, his job as a chauffeur and so on. It is only right near the end of the film where the film develops a vague siege situation and not until the last fifteen minutes where the group stir out of sitting around to do something to combat the monster.

The film’s great failing is that its’ provision of an invisible monster is not for any reason that allows it to be subtle and create something by suggestion or psychological ambiguity as in Cat People, The Haunting et al, but simply one that has allowed it to be as cheap as possible and avoid any special or creature effects. Indeed, this may well count as quite possibly the world’s first (almost entirely) effects free monster movie. Even then, of the invisible monster’s appearances, we get almost nothing – a few howling noises heard in the cave and then some brief shots of cast members turning up with their faces clawed. The most we ever get is the scene right towards the end where the party realise they can track it by sprinkling flour across the ground outside the house and we see some claw prints appear. This is followed by the thoroughly ridiculous image of them throwing axes at the monster and a single shot of the sight of two axes moving horizontally across the screen embedded in its invisible body. There is also a final scene where they flee in a truck and it invisibly tears the roof off the back before they eliminate it by setting the truck on fire.

Surprisingly, Sound of Horror is worth noting for some cases of faces before they were famous. In a minor role as one of the girls of the party is Polish-born actress Ingrid Pitt, later to gain fame as a heroine in Hammer films such as Countess Dracula (1971) and The Vampire Lovers (1970), as well as other Anglo-horror efforts like The House That Dripped Blood (1970) and The Wicker Man (1973). The lead actress is Soldead Miranda, who gained fame as one of Jesus Franco’s lead actresses in the likes of Count Dracula (1970) and Vampyros Lesbos (1970) before her untimely death in 1970.