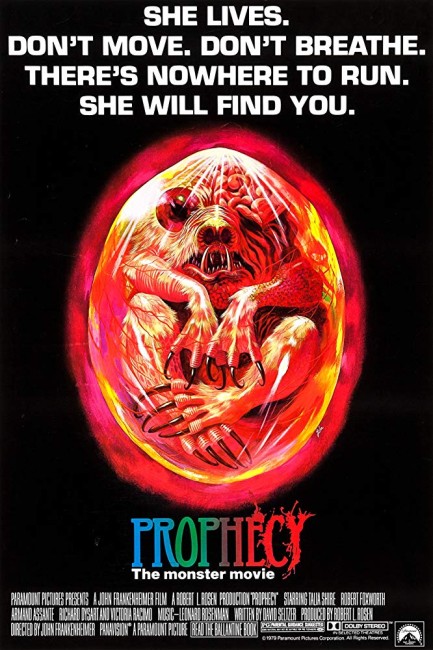 Health inspector Rob Vern accepts a job to conduct an environmental impact report on an area of forestland in Maine that remains the centre of heated dispute between a paper milling company and local Indians. Rob travels to Maine, taking his wife Maggie with him. However, Maggie has just found out that she is pregnant but is afraid to tell Rob. While in their cabin, Rob encounters mutated and oversized wildlife. He then discovers that the Indian locals are suffering from widespread neurological disorders. He realises that mercury from the mill is being dumped into the water where it absorbed by fish that are then eaten by the Indians. This has the effect of turning the infected person’s central nervous system and brain to mush and creates foetal mutations during pregnancy. Now, a giant bear that has been mutated by the mercury emerges from the forest, rampaging and killing all in its path.

John Frankenheimer was one of the great directors of the 1960s, producing classics like The Birdman of Alcatraz (1962), The Manchurian Candidate (1962), Seven Days in May (1964), The Train (1964), Grand Prix (1966) and Seconds (1966). The Manchurian Candidate, Seven Days in May and Seconds in particular confirmed John Frankenheimer as a director of anxious, edgy Cold War tensions, with The Manchurian Candidate having become a cult classic with its darkly satirical take on the American politics. Alas, into the 1970s and up until his death in 2002, Frankenheimer’s standing proved less stable. He varied between competent commercial successes like French Connection II (1975), Black Sunday (1977), The Holcroft Covenant (1985), 52 Pick-Up (1986) and Ronin (1998) and works that were less than stellar if not downright flops such as The Extraordinary Seaman (1967), The Gypsy Moths (1969), 99 and 44/100% Dead (1974), The Challenge (1982), The Fourth War (1990), and the universally derided The Island of Dr Moreau (1996) and Reindeer Games (2000). Chief among the exhibits of those who lamented John Frankenheimer’s once-greatness was Prophecy.

Prophecy was a monster movie designed to tap into the new fad for Animals Amok films that was the latest big thing following the success of Steven Spielberg’s Jaws (1975). It had a good many elements that should have made it a classic – John Frankenheimer as director, screenwriter David Seltzer who was a hot name coming just after the massive hit of The Omen (1976). Instead, Prophecy proved to be a complete flop.

David Seltzer is a screenwriter – see below for his other genre works – who frequently obsesses over the socially apocalyptic – in particular, the Biblical End Times prophecies that play out in works like The Omen and The Omen (2006), The Eighteenth Angel (1998) and Revelations (tv mini-series, 2005), or of nature amok as we see here and in his first film, the mockumentary The Hellstrom Chronicle (1971).

Prophecy taps into a pile of burgeoning 1970s environmental concerns. In fact, David Seltzer has taken the basics of Prophecy from a real-life apocalypse – the environmental disaster in the Japanese city of Minimata, which came to light in 1958 where it was discovered that mercury waste being dumped into a nearby river from a chemical plant had caused severe mutations and neurological degenerations among the locals. The effects of this consisted of loss of muscular control, vision and hearing, followed eventually by insanity and paralysis. Prophecy, with typical monster movie alarmism, promptly has this put to creating giant sized and rampaging wildlife, whereas in real life mercury poisoning would tend to render the victims helpless and unable to control their bodies. Certainly, Seltzer’s quoting of these scenes gives the film a level of real-world credibility that many other monster films lack.

In the 1950s, when films like The Beast from 20,000 Fathoms (1953) and Godzilla, King of the Monsters (1954) added social commentary in the form of strident warnings about the A-bomb to tight, compact monster movies, they had a crazy integrity that came from the seat of the unconscious and would speak with fierce intensity. Despite a budget ten, often a hundred times, greater than these films ever had, Prophecy, in trying to get outraged about environmental issues, is no more than a monster movie that has just picked up a placard and joined the latest trendy protest march. Others of this era did this type of thing with amazing results, like Larry Cohen in It’s Alive (1974), but here the results are incredibly heavy-handed. You can almost see Prophecy ticking liberal causes off on its fingers at times – as the film opens, within a matter of two scenes it manages to introduce themes of Ghetto Landlords, Indian Land Rights, Black Poverty, Unwanted Pregnancy, Health Conditions of the Poor and Industrial Pollution. This is not a monster movie with a social conscience – it is a turkey with over-inflated pretensions to message making.

Much of which might have been tolerable if Prophecy were any good as a monster movie. However, the results emerge poorly on screen. The weak, grainy photography makes the film look no different from the low-budget Jaws rip-offs of William Girdler – there is little difference in look between Prophecy and Girdler’s cheap Grizzly (1976), for instance. The creature effects are frequently laughable – a giant flying salmon, the mutant bear with a face like a pussycat. Especially hilarious is the image of the mutated baby bear with a miniature IV tube stuck in its arm, which for some reason left me in uncontrollable titters.

Much of the film teeters on the brink of this unintentional absurdity and fails to emerge on the winning side – the scene with the kid being killed in the exploding sleeping bag is positively hilarious. John Frankenheimer tries hard to generate tension during the scenes with the mutant bear pursuing the cast near the end, but much of the story is predictable and boring. The opening chase sequence verges on the incoherent. If one did not know that John Frankenheimer was also the director of stylish, paranoid nightmares like The Manchurian Candidate and Seconds it would be impossible to guess – this is just amateur night at the drive-in.

John Frankenheimer’s other films of genre interest are the classic Cold War brainwashing black comedy The Manchurian Candidate (1962); Seven Days in May (1964), a political thriller about an armed coup to overthrow The President; the rejuvenation syndicate film Seconds (1966); and the H.G. Wells adaptation The Island of Dr Moreau (1996).

Screenwriter David Seltzer has written other mainstream films such as Punchline (1988) and Bird on a Wire (1990). Seltzer’s most famous work was The Omen (1976), which created the genre for End Times films concerning the Biblical appearance of the Anti-Christ. Seltzer also ventured to genre material with his scripts for the ghost story Dragonfly (2002) and ventured back to Biblical End Times themes for The Eighteenth Angel (1998), the six-episode mini-series Revelations (2005) and the remake of The Omen (2006).