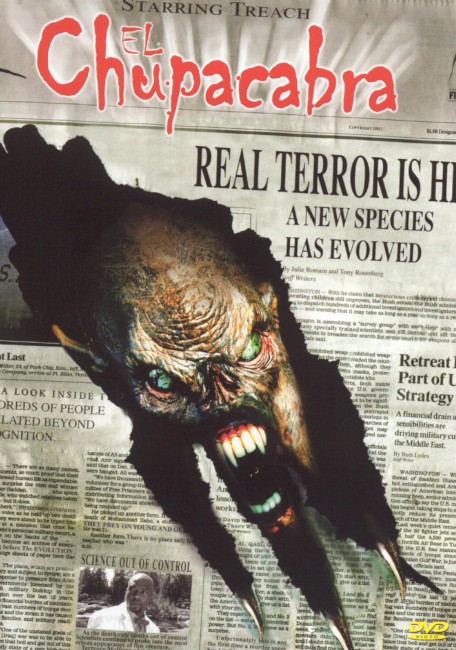 In the Latino neighbourhood of Boyle Heights in Los Angeles, animal control officer Navarro has to deal with dog remains that have been found savagely gored. Believing some wild animal responsible, Navarro then meets Starlina Divide, who has written a ridiculed book about the legend of the blood-drinking monster the Chupacabra, which she believes is responsible. They follow a trail of gored bodies and Navarro sees the Chupacabra in action, killing people. At the same time, they must deal with the scientist Dr Goodspeed who is trying to capture the Chupacabra and may have been responsible for originally unleashing it in Boyle Heights. Goodspeed has also employed a thug to eliminate all evidence. Also on the trail are two detectives who believe the activities of the Chupacabra are those of a serial killer and resent Navarro’s interference in their investigation.

The Chupacabra is a creature from urban legend. The legend appears to have originated in Puerto Rico in the 1950s/60s, Chupacabra being the Spanish term for ‘goat sucker’ after its reported habit of drinking the blood of livestock, in particular goats. During the 1990s in particular, the Chupacabra legend gained fame throughout most Latin American regions and spread to the US. There have been several films made about the Chupacabra before with Guns of El Chupacabra (1997), Legend of the Chupacabra (2000), Bloodthirst: Legend of the Chupacabras (2003), El Matadero (2004), Chupacabra Terror (2005), Mexican Werewolf in Texas (2005), Night of the Chupacabra (2005), Goatsucker (2009), Chupacabra vs The Alamo (2013), even an episode of the anthology The Alien Agenda: Under the Skin (1997), as well as El Mundo Gira (1997), an episode of tv’s The X Files (1993-2002, 2016-8), although none of these have been standout treatments. (It should be noted that all of these are US-made films and we have yet to have any Chupacabra film from Latin American filmmakers).

Every publication and website seems to refer to this film as El Chupacabra – this is the name on the dvd cover, however the name on the opening credits of the film, which is always the naming convention this site goes with, is merely Chupacabra without the Spanish article.

Chupacabra has all the features of an 00s CGI monster movie – a no-name cast, a script written with scanty guard for biology or science – however, it is so cheaply made that it lacks even a budget to produce any CGI effects and relies on the old standby of makeup effects. The photography makes it feel like little more than an amateurish home video. The appearances of the Chupacabra and all the shocks reek of moves unimaginatively copied by the directors after watching too many other cheap horror films. The film eventually arrives at the standard monster movie stuff of the Chupacabra chasing people around darkened industrial corridors. That said, the climax is disappointingly flaccid, lacking a proper confrontation between the heroes and creatures. To its credit, the makeup effects used to create the Chupacabra are one of the better things about the film.

The dialogue is poorly written and feels like it has been borrowed from other films’ prose and not like anything normal people would ever say. There are ridiculous pieces of writing like where detective Jerry Rodriguez examines a single body at a crime scene and, without even reading a forensics report, lists an incredibly detailed profile of the age, background and habits of the serial killer they are supposedly looking for. In another hilarious piece of dialogue, Elina Madison has a speech where she matter-of-factly states that “Chupacabra have the same DNA as aliens.”

Little explanation is given for the Chupacabra. The script tosses ideas about genetic engineering and the Chupacabra being of alien origin up into the air but never makes anything of them – the Chupacabra just appears out of nowhere without any explanation. For that matter, we are not even sure why scientist Treach unleashed the Chupacabra in suburban L.A. and then seems to spend the rest of the film trying to recapture it again.

The cast are the usual unknowns that inhabit these films and whom one is unlikely to ever hear from again. Eric Alegria makes for an incredibly unlikeable hero. Whoever had the bright idea to include a running subplot about his woes with a boss who is constantly chewing him out for not turning in his paperwork made a major mistake as this both introduces a tedious subplot and turns the hero into a whiny underdog. The worst piece of casting is rapper Treach who plays the scientist, a profession for which he displays little conviction. He gets pithy lines like “Every time someone tells me not to worry, that’s exactly what I do,” which he utters entirely without humour or the sense where a professional actor would naturally inflect the delivery.

Co-director Paul Wynne had previously directed Tail Sting (2002), another incredibly bad monster movie about the mutant scorpions aboard a plane. He and Brennon Jones subsequently went onto direct the also reportedly bad Alien 51 (2004), which featured Hollywood madam Heidi Fleiss as an alien visitor.