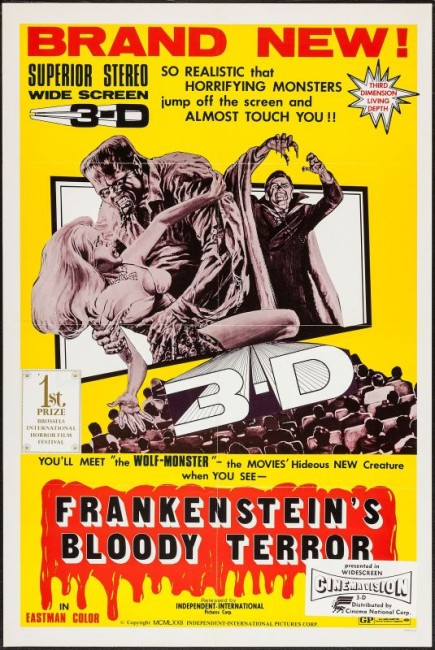 Waldemar Daninsky, the scion of a well-to-do Polish family, turns up at a ball. There he develops an attraction to Count von Aarenberg’s daughter Janice right under the nose of her would-be fiance Rudolph Weissmann. Waldemar tells Janice and Rudolph the story of the nearby Castle Wolfstein where Imre Wolfstein was bitten and became a werewolf before being killed by his grandfather. Two gypsies camp in the ruins of the castle and find the crypt. Seeking valuables, they pull the silver cross from the chest of Imre’s corpse, bringing him back to life. With reports of a wolf killing in the area, the townspeople set up a manhunt. Joining the hunt, Waldemar tackles Imre and is bitten before he restakes him with the cross. Waldemar now struggles against the werewolf that comes out in him. He begs Rudolph to lock him up in the castle dungeon. Rudolph seeks the help of Janos Mikhelov whose father treated Imre. Janos and his wife arrive but it becomes apparent that they are vampires and are seeking to seduce Janice and Rudolph.

Spanish actor Paul Naschy (1934-2009), real name Jacinto Molina, gained fame as a horror icon during the 1970s after making his first appearance in Frankenstein’s Bloody Terror here. A lifelong horror fan, Naschy also wrote the script for the film under his given name. He was persuaded by the producers to take the lead role of the wolfman Waldemar Daninsky after the originally cast actor bowed out and to adopt the pseudonym Paul Naschy to help sell the film to English-language audiences. The wolfman became Naschy’s signature role and he went onto play the part in nine other films (see below for the other Waldemar Daninsky films). Naschy played a number of other iconic horror roles in films such as Jack the Ripper of London (1971), Count Dracula’s Great Love (1972), Horror Rises from the Tomb (1972), The Hunchback of the Morgue (1972) and Vengeance of the Mummy (1973), most of which he also wrote. He also began to direct with Inquisition (1976) and made fifteen films as director, almost all in the horror genre. The Man Who Saw Frankenstein Cry (2010) is a documentary about Naschy.

Paul Naschy is a clear fan of classic horror – all of his films draw on the classic monsters of Universal horror – Count Dracula, the Wolf Man, the Hunchback of Notre Dame, the Frankenstein monster and the Mummy. Frankenstein’s Bloody Terror reads as an attempt to filter Lon Chaney Jr’s The Wolf Man (1941) through the sensibilities of the Hammer horror films of the 1960s and 70s. On a directorial level, Frankenstein’s Bloody Terror is routine. The action is flat and prosaic, while Enrique L. Equiliz does almost nothing to generate atmosphere or make the audience jump.

The one plus is the photography. The film was shot in 70mm and has been screened in 3D but was mostly seen flat (as is the case with the prints circulating today). The production has gone to shoot in a real castle – located in the town of San Mart’n de Valdeiglesias, which is near Madrid – and the widescreen photography gives the otherwise B-budgeted film a slick and professional sheen that easily competes with some of the Hammer product being released around the time.

Paul Naschy is not a particularly great actor. To his defence, this was his first performance – although he would never improve much. He has a handsomeness but he is no Christopher Lee or for that matter even a Bela Lugosi despite his preference for monster roles. With Frankenstein’s Bloody Terror, Naschy is clearly wanting to rewrite the story of Lon Chaney Jr’s Larry Talbot from The Wolf Man in a way that regards the wolfman as a hero. The film does introduce a left field element about halfway through that sidelines Naschy’s wolfman and introduces two vampires who proceed to seduce the young couple, something that takes what has up to that point been a werewolf story in another direction entirely for a time. Naschy never emerges again until fairly much at the end where he becomes the good guy who kills the evil vampires.

The strangest part about Frankenstein’s Bloody Terror is how it features no Frankenstein monster or member of the Frankenstein family. The original Spanish title of the film translates as Mark of the Wolfman. When it came to the English-language version, the film rights were brought by Independent International for US release. Independent International was contracted to deliver a Frankenstein film – what would eventually emerge as Al Adamson’s Dracula vs Frankenstein (1971), which should not be confused with Dracula vs. Frankenstein (1970), the Waldemar Daninsky sequel that Paul Naschy made after this – but this was not completed by the due date. The studio inventively took Mark of the Wolfman, which features werewolves but nothing to do with any aspect of the Frankenstein story, and slapped on a thirty second animated prologue that explains how the Wolfstein family later changed their name to Frankenstein.