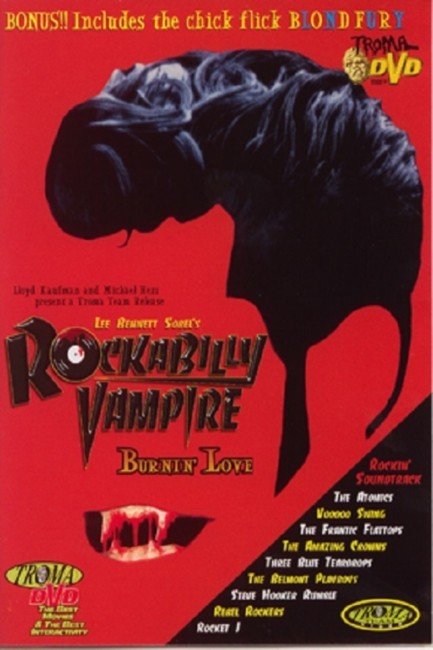 Iris Daugherty works at a boutique in Greenwich Village and is having a run of bad luck – no publisher wants to buy her book on Elvis sightings while she is behind in her rent. She has no luck with her love life either, caught between an obsessed Beatles fan and her landlord’s son Benny Lawalski pestering her for dates. She then encounters Eddie Vincent, a 1950s styled rocker and falls for him. He reveals to her that he is a vampire who was bitten in 1956 by his brother Wrecks. The two try to maintain a relationship in between avoiding Wrecks, Iris’s would-be paramours and finding enough blood for Eddie.

Rockabilly Vampire: Burnin’ Love was a debut film for Lee Bennett Sobel. The film was picked for release by Troma. Unlike most other directors who went the Troma releasing route, Sobel has gone on to make a handful of other films with the likes of UFO Fever (2003), Luvrgrl (2004), Hotties (2005) and sequel, and Terrormarketers (2005), although none of these appear to be have been widely seen.

The main problem with Rockabilly Vampire is its’ portrait of a vampire. As a vampire, Paul Stevenson seems neither darkly charismatic nor romantically moody and lacks much in the way of stature. The other vampire nemeses pitted against him never amount to much either. Margaret Lancaster, who is surprisingly enough a celebrated classical flautist elsewhere, makes for a heroine/love interest who seems too pouty and petulant. The relationship between the two of them is never exactly one where you seem to cheer on two oddball outsiders and want for them to get together.

Technically, Rockabilly Vampire is a better-made film than most of the bottom-of-the-barrel stuff that Troma picked up for release during this period where often an outrageous title was the most interesting thing about the film – see the likes of I Was a Teenage TV Terrorist (1985), Surf Nazis Must Die (1987), Stuff Stephanie in the Incinerator (1989), A Nymphoid Barbarian in Dinosaur Hell (1990), Strangest Dreams: Invasion of the Space Preachers (1990), Fertilize the Blaspheming Bombshell! (1992), Space Zombie Bingo!!! (1993), Pterodactyl Woman from Beverly Hills (1997) and Scrotal Vengeance (2001) to name but a sampling.

That said, Lee Bennett Sobel never seems to ignite any of the drama in the film. Or for that matter the comedy. It’s about two outsiders who come together and try to make it. There are occasional pitfalls placed in their way from Margaret Lancaster’s ex’s – a Beatles fan poseur and her landlord’s son – to Paul Stevenson’s brother and his cronies but they never amount to much threat or drama.

The end credits announce a sequel Burnin’ Love II: Hot Stuff, although this has so far failed to emerge.