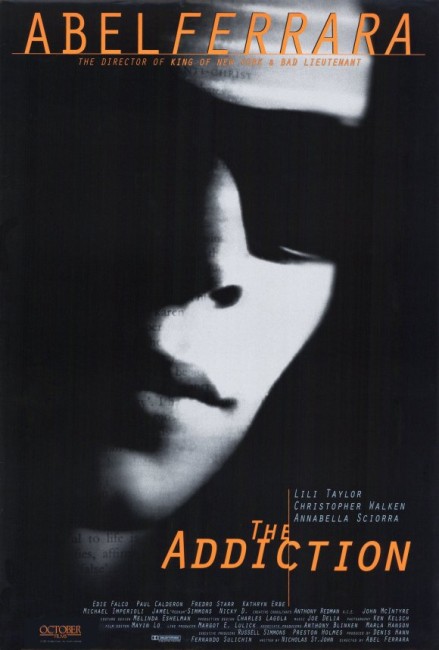 Philosophy student Kathleen Conklin is bitten by a vampire. As she succumbs to the vampiric urges, Kathleen comes to understand that the vampire is a mirror of the cruelty and violence at the heart of human nature.

The concept of the vampire was inherited into Western popular culture via Bram Stoker’s Dracula (1897). As a result of Stoker’s legacy, the vampire has always been rooted in Christian concepts of good and evil, with the vampire representing an animal sexuality hidden beneath the decorum of mannered society before it is eventually despatched by confident men who stride a resolute line between science and religion. The cinematic vampire was popularised by the Bela Lugosi Dracula (1931) and the hundreds of vampire films that have followed since have almost all fallen into the symbolic resonance that Stoker crafted. In the 1970s and 80s, the vampire film began to abandon classical notions of good and evil. Firstly, it was the tacit recognition in films like Count Yorga, Vampire (1970), Dracula A.D. 1972 (1972), Blacula (1972) and Love at First Bite (1979) that the Victorian trappings of the vampire film had limited potential and that the vampire in cape and dinner-suit cut an absurd, unthreatening figure when brought into the present.

In the 1980s and beyond, the vampire film began to implicitly accept the death of the traditional reason and religion vs bestial nature dualism. Ironically, instead of dying out, the vampire film began to flourish more than ever before. The resulting films could be thrown into three rough categories:– those that overtly spoofed and parodied the traditional vampire – the likes of I Bought a Vampire Motorcycle (1990), Vampire Trailer Park (1991), Dracula: Dead and Loving It (1995) – or conducted pastiches that mixed it with other genres. ie vampire cop show – tv’s Forever Knight (1992-6), vampire getaway film – From Dusk Till Dawn (1996), vampire mafia – Innocent Blood (1992). Or else those films that dragged the vampire into the modern world and transformed the character into a kind of badass punk – The Lost Boys (1987), Near Dark (1987), Blade (1998). Thirdly there were those that inverted the metaphors of Bram Stoker about sexual repression to turn vampirism into a dark, sensual forbidden romance – the likes of Graveyard Shift (1987), To Die For (1989), Bram Stoker’s Dracula (1992), Tale of a Vampire (1992), The Nosferatu Diaries: Embrace of the Vampire (1995) and Embrace the Darkness (1998), before it was transformed into the chaste romance of Twilight (2008) and sequels.

The rarest among the new vampire films have been those that have sought to reinvent and question the metaphors of vampirism. The first film to try this was Incense for the Damned/Bloodsuckers (1969), which ambitiously tried to develop vampirism as a metaphor for sexual impotency. The film that succeeded the best here was the exceptional Martin (1976), which pared all classical mythology away with startling effect – contrasting a pallid and weak, sexually dysfunctional bloodsucker up against his conservative grandfather who insisted on classical religious symbolism with absurdly cruel inappropriateness. Other notable examples might be the German film Jonathan (1970), which made vampirism into a metaphor for Nazism and feudalism, and the underrated Interview with the Vampire: The Vampire Chronicles (1994), which conducted an elegant vampiric existential quest with the hero setting out with the question of if he is not evil, what then is the purpose of his condition? Similarly Thirst (1979) and Ultraviolet (1998) locate a vampirism stripped of religious symbolism within a modern medical/scientific world. Also of interest was the British entry Blood (2000), which turned vampirism into a metaphor for drug addiction.

The Addiction is another of these attempts at re-evaluation of the vampire. The Addiction was directed by Abel Ferrara, who also made the likes of The Driller Killer (1979), Ms 45/Angel of Vengeance (1981), Bad Lieutenant (1992) and Body Snatchers (1993). Throughout almost all of Abel Ferrara and his writing partner Nicholas St John’s work lie twin themes – a fascination with the darkest depths that the human soul is capable of scouring and the belief in the redemptive power of Catholicism. These twin fascinations find their most potent expression in Bad Lieutenant – a muck-scouring excoriation of human degradation that eventually finds Catholic redemption in the forgiving of a killer. In some ways, The Addiction is almost a reiteration of Bad Lieutenant with Lili Taylor’s vampire philosophy doctorate student in the place of Harvey Keitel’s drugged-out, woebegone cop and the story conducting in philosophical terms the same descent into the darkness of the soul before finding salvation.

The Addiction has a tendency to leave one feeling like they are being hit over the head by the collected works of Western nihilist philosophy. Abel Ferrara quotes Sartre and Kierkegaard and engages in debates about determinism and redemption through guilt, while Ferrara-regular Christopher Walken turns up as a vampire who sees himself as an avatar of Nietzschean meta-morality. It is the weightiest film that one has seen in some time. At the same time, Ferrara and Nicholas St John turn The Addiction into an extraordinary meditation on human nature and its fundamental predisposition toward evil. They see the vampire as a complex metaphor for an evil that is endemic to human nature. “The old saying that ‘Those who do not learn from history are doomed to repeat it’ is a lie,” meditates Lili Taylor. “The real question is – what can be done to stop the blight spreading?” The film bombards one with images of Me Lei and the Holocaust – in the opening scene alone, Lili Taylor exits a Holocaust museum and debates what the point is of convicting political leaders of war crimes when war crimes are crimes of mass guilt.

The complexity of the ideas leads to some startling reinventions of classical vampire mythology – the vampire cannot stand to look in a mirror because mirrors reflect the raw, exposed face of evil; the reason they are undead is because evil cannot die. Abel Ferrara also offers up some striking reinventions of the images of vampirism – in one scene, Lili Taylor shoots up blood with a syringe just like an addict. Although, after conducting such an extraordinary and gloomily bleak excavation of the human condition, Lili Taylor’s acceptance of the redeeming power of Catholicism at the end seems glib and even cursory.

In the end, The Addiction is not the best of Abel Ferrara’s films. The philosophical heaviness stands in the way of easy entertainment value (not that Ferrara’s films could ever be called easily entertaining) and some corner-cutting lower-budget values are apparent at times. What cannot be denied is that The Addiction is a powerful and complex reworking of the central metaphors of vampirism. Compare The Addiction to Nadja (1994), which was released only a few months after. Both are very similar films – both are shot in black-and-white and both feature a predatory female vampire stalking the modern world. Whereas Nadja was merely content with conducting a stylistic pastiche of Dracula’s Daughter (1936), The Addiction tackles the challenge of mounting an entire philosophical reconception of vampirism.

Abel Ferrara’s other genre films are:– The Driller Killer (1979) about a power drill-wielding psycho; the rape/revenge drama Ms 45/Angel of Vengeance (1981); Fear City (1984) about a serial killer stalking strippers; the worthwhile and underrated remake of Body Snatchers (1993); the William Gibson adaptation New Rose Hotel (1998); and the End of the World film 4:44 Last Day on Earth (2011).