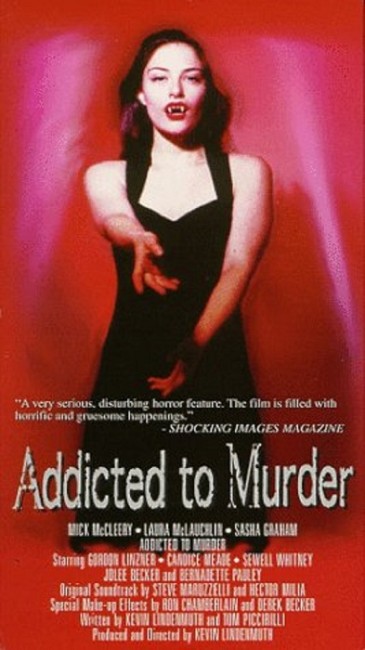 Joel Winter lives a solitary life in New York City. He is haunted by the memory of Rachel, a woman he met many years ago while living in the Michigan boondocks, who repeatedly appeared to him, making him kill her in various ways. Joel may be responsible for a series of serial killings but is unsure. He receives mysterious notes asking him to come to a nightclub The Hungry where he meets and sleeps with Angie. She drinks his blood and tries to persuade him to surrender to his nature as a killer, something he resists.

Addicted to Murder is a film from Kevin J. Lindenmuth. Lindenmuth is a low-budget independent horror video director who debuted with Vampires and Other Stereotypes (1994) and has since gone onto the produce the Alien Agenda series and numerous others (see below). Kevin J. Lindenmuth’s work has a complexity that far belies its low-budget origins.

For such a low-budget film, Kevin J. Lindenmuth has written an amazingly audacious script – one that flips back and forward between different periods of time, cuts between pseudo-documentary soundbite interviews of people associated with Mick McCleery’s killer, as well as creating considerable ambiguity about what is happening.

Addicted to Murder is a vampire film. Although watching it one has to divorce themselves from any classical concept of vampires. Indeed, at the end you are not even sure entirely whether it is a vampire film. It is more a series of obsessions with a mysterious woman in the central character’s past. Lindenmuth withholds essential information from us – exactly who the woman that protagonist Mick McCleery is obsessed with is and why she keeps asking him to kill her; or even anything about the murders that he is supposed to have conducted.

There is another mystery woman (Sasha Graham) who appears, drawing Mick McCleery into a series of murders amid casual, enigmatic encouragements for him to break through into another way of thinking and become a different type of human – this identical relationship also appeared in the compulsively weird Worm segment directed by Lindenmuth in The Alien Agenda: Out of the Darkness (1996).

The atmosphere is constantly fascinating – the weird flashbacks with the woman begging Mick McCleery to kill her over and over again; McCleery’s encounters with women, which the soundbites leave holding a looming sense of something bad about to happen. On the minus side, the effects are cheap, while the enigma becomes repetitive and ultimately frustrating in never entirely making clear what is going on. However, you cannot help admire the audacity of what Kevin J. Lindenmuth is trying to do.

Lindenmuth made a sequel, Addicted to Murder: Tainted Blood (1998), which is a little more explicit about being a vampire film and is also well worthwhile. Lindemuth subsequently co-directed Addicted to Murder 3: Blood Lust (1999).