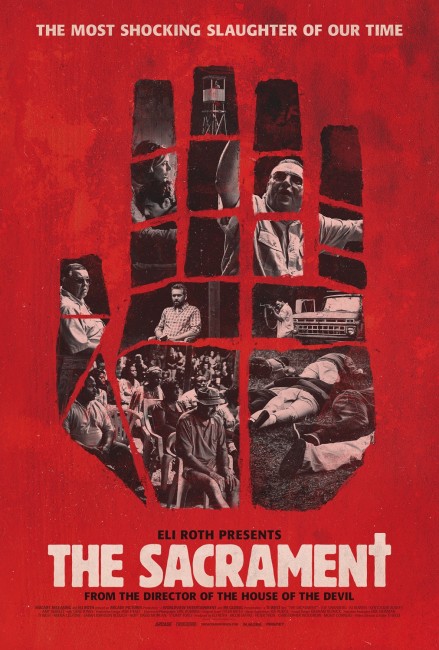 A reporter and cameraman from the investigative magazine show ‘Vice’ accompany photographer Patrick Carter as he travels to South America at the request of his sister Caroline who has joined a cult. Flying in to the remote location, they are taken to Eden Parish. There they film the followers who have built an elaborate compound in the jungle, what they describe as a paradise away from the corrupting influence of civilisation. They are introduced to the group’s charismatic leader who everyone refers to as Father. However, when one child slips the group a note begging help, they meet her mother and others who plead to be allowed to leave with them on the flight out. This precipitates a horrible sequence of events where Father decides that the entire group must commit mass suicide.

Ti West has been a rising director in the last few years. Working his way through a series of efforts for Glass Eye Pix – The Roost (2005) and Trigger Man (2007), as well as Cabin Fever 2: Spring Fever (2009) for other producers – West then gained more than reasonable word of mouth with The House of the Devil (2009). It was however with his next film, the ghost story The Innkeepers (2011), that West showed he was really capable of doing something. Aside from his turning out episodes for various anthology films – The ABCs of Death (2012) and V/H/S (2012), West next returned with The Sacrament here. This never quite hit the stride that The House of the Devil or The Innkeepers did and languished in limbo for a year, attaining a very minor theatrical distribution just before being dumped to dvd. Indeed, the greatest attention the film received was during its Toronto International Film Festival press screening when blogger Alex Billington called 911 over someone using a cellphone during the session.

I characteristically make a point of reading as little as possible about a film before sitting down to watch. Based on a synopsis, my expectation The Sacrament was that it was going to be a film about the activities of a sinister cult – the sort of which we get in the horror genre with a great deal of regularity – see films like Servants of Twilight (1991), Bless the Child (2000), Believers (2007), End of the Line (2007) and The Reaping (2007). In reality, we get a very different film where Ti West has thrown out any association with horror movie cults – in fact, you could easily make the argument that The Sacrament is not even a horror film at all – and made a film closely based on the real-life Jonestown tragedy.

Jonestown was the name that has been collectively used as both the compound and far more notoriously the incident surrounding the People’s Temple and their mass suicide in 1978. The People’s Temple was a church organisation headed by Jim Jones that operated in several cities, gaining its greatest popularity in San Francisco in the mid-1970s. In 1976, inspired by an article that claimed that Guyana was the best place to survive a nuclear war, Jones moved some thousand people to a twelve-kilometre area in the remote jungle and built a compound there (although the real reason may have been to avoid a probe into the church’s questionable activities). The incident that placed Jonestown into notoriety occurred in 1978 when Congressman Leo Ryan and several media travelled to the compound to investigate what was going on, including the murder of a church member. While everything looked fine on the surface, some members slipped the party a note saying they wanted to leave. When Ryan and his party took the group away with them to the airstrip, temple members attacked the party and shot Ryan and several others. Jones then persuaded the followers to drink Kool-Aid that had been laced with cyanide – 909 of the church members committed suicide in such manner, while a further nine died during the airfield shooting. The Jonestown incident has been depicted on film twice before with the exploitation film Guyana: Crime of the Century (1979) with Stuart Whitman as Jones and the tv mini-series Guyana Tragedy: The Story of Jim Jones (1980) starring Powers Boothe as Jones.

Ti West replicates many of the details of Jonestown with a surprising degree of accuracy – a compound built in the midst of the remote jungle in an unnamed South American country (in reality, location shooting in Georgia); Gene Jones as the group’s leader outfitted in tinted glasses; showing the way in which Jones was able to bring people together in a way that transcended racial barriers of the period; Jones’s drug addiction issues; how the desire for several members to leave became the issue that tipped the cult’s paranoia over, resulting in the decision to conduct mass suicide; the shooting of those who wanted to leave as they reached the airfield; the administration of spiked Kool Aid. The production designers have even replicated the look and layout of the temple from the surviving photographs.

Cast as the equivalent of Jim Jones is Gene Jones (no relation), an actor with half-a-dozen prior film credits all in bit parts. For a time, Jones captivates with his flinty homespun folk wisdom and genial cliches of the outside world. Clearly, this is Ti West refusing to go for any of the flashy, charismatic cliches with which cult leaders are usually portrayed in genre films. On the other hand, it gives us a Jones who is an older man – Jim Jones was 47 when he died, whereas Gene Jones looks to be well into his sixties and quite a lot bulkier. Where he should be projecting charisma, Gene Jones seems to be struggling through ill health and playing the part more as a retired farmer espousing home wisdom. A Google of the photos of Jim Jones shows someone who was handsome, sharply dressed, almost Latino in looks (Jones himself claimed Cherokee ancestry) at which Gene Jones seems to be almost the opposite of any of this. The other complaint I would make about The Sacrament is that Ti West seems more interested in simply depicting the basic events that happened. What seems missing from this is any analysis of the fascinating central figure of Jim Jones, the forces that drove him, or any explanation of his charisma and the reasons whereby he inspired so many people to follow him into the jungle and to commit mass suicide.

West also shoots The Sacrament as a Found Footage film – due to the fact that the cameras of the 1970s were bulky and not easily manipulable like modern lightweight digital cameras, West has simply relocated the events in the present-day. Though it is closely modelled on Jonestown, the end credits maintain the fiction that what we are seeing is based on real video footage. Thus the Senator and his aides have been eliminated from the story and replaced by a camera crew from an investigative internet site. There is never much the sense that The Sacrament operates as a horror film, more so as a documentary recreation of sorts – although there are some occasional moments that the film tips over into horror territory. Especially good in this regard is the unnervingly intense performance from Amy Seimetz who at one point has her brother Kentucker Audley tied up in a chair attempting to feed him Kool Aid and then injecting him with a syringe after he struggles.

Ti West subsequently went on to make the non-genre Western In a Valley of Violence (2016).