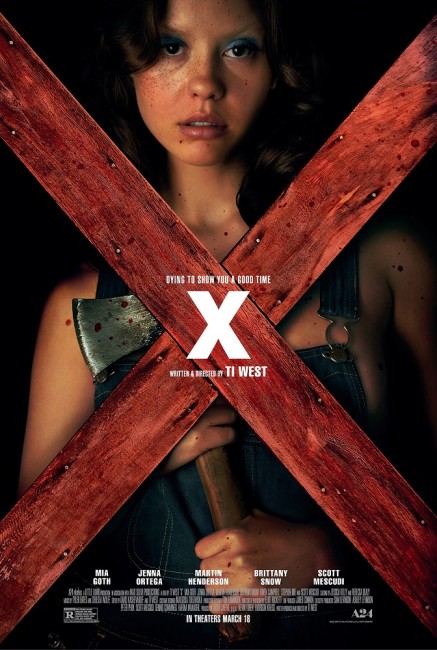 Texas, 1979. Maxine has agreed to appear in the pornographic film The Farmer’s Daughter produced by her boyfriend Wayne, which she wants to believe will make her a star. Maxine, Wayne and the film crew leave Houston in a van and head into the countryside where Wayne has rented an adjoining house on the property of the octogenarian farmer Howard. They set about shooting while trying to keep what they are doing a secret from Howard but are seen by Howard’s wife Pearl. Howard and Pearl are having difficulties in that he is unable to get it up and sexually satisfy her any longer. Pearl and Howard then take their frustrations out on the young people and begin killing them.

Director Ti West has gained considerable acclaim in genre material in recent years. West began making films for Larry Fessenden’s Glass Eye Pix with the likes of The Roost (2005) and Trigger Man (2007), as well as Cabin Fever 2: Spring Fever (2009) for others producers. It was however with his next two Glass Eye pics The House of the Devil (2009) and the ghost story The Innkeepers (2011) that people started to pay attention to West’s name, He followed this with The Sacrament (2013), a Found Footage film about a cult, a modern retelling of the Jonestown mass suicide. The latter half of the 2010s showed West stuck in a holding pattern turning out episodes of The ABCs of Death (2012) and V/H/S (2012) and only one other feature with the Western In a Valley of Violence (2016), plus assorted tv episode work.

West shot X in New Zealand in February-March 2021, presumably because New Zealand was the one country in the world that was Covid-free at the time. (As a former local, it proves rather amusing seeing local actors turn up as Texans – Martin Henderson does a reasonable turn as the film’s producer, far more amusing is seeing Simon Prast as a hellfire evangelist on the tv). At the same time, West also shot a prequel entitled Pearl that tells the elderly woman’s story during the 1910s.

From the opening shot that mimics a 16mm frame before it opens out to reveal that it is simply the edges of a barn door, X announces it is a retro work. The film comes with much of a feel for the period, including assorted pop culture references, not to mention the whole aesthetic of the 1970s porn film. Most of all, the early sections with the group travelling to a remote farm in the countryside in a panel van give off a strong vibe of The Texas Chain Saw Massacre (1974). West replicates the same effect Tobe Hooper did of creating a placid journey into the country and then jolting us out of our ease –Hooper did it with the scenes where hitch-hiker Edwin Neal goes crazy and slashes himself and others in the van; Ti West achieves similar effect with a scene where the group pass a vehicle that has impacted with a cow, splattering it.

The film opens with a good deal of scene-building and tension between the two groups. The arrival at the farm comes with an abrupt jolt as Stephen Ure pulls a shotgun on Martin Henderson. This is de-escalated but the scene ends on the sting of Stephen Ure’s parting comment: “I don’t think I like you, Wayne. In fact, I don’t much like the looks of none of y’all.” Not long after, there is the scene where Mia Goth strips off the go swimming in the tiny lake only to stir an alligator. West’s shoots most of the scene with a drone camera looking directly down from overhead but rather than filling the scene with edgy music hyping our tension, overlays a calm vocal song as we sit on edge to see whether she will make it to the pier before the alligator or even notice it behind her, all of which creates far more effect than standard suspense driving would have done.

Ti West stated that he wanted to make a Grand Dame Guignol film – the 1960s genre begun with What Ever Happened to Baby Jane? (1962) featuring former name actresses past their prime going bonkers in grand style. I can see where he comes from with this. There is the same dynamic of a deranged old woman – in this case, an aging couple – gone psycho. Although here the age group of the couple is upped far further than any of the actresses who ever appeared in the psycho biddy cycle with the couple at least appearing as octogenarians. I could see similarities between X and Strait-Jacket (1964) with Joan Crawford hacking up people on her farm, although in truth most of the Batty Old Dames films were less slasher films than they were Gothic psycho-thrillers.

Ti West draws this dynamic out in a number of ways. There is the contrast between conservative backwoods Texas locals – exemplified by the cranky old-timers waving shotguns and citing rights to personal defence and of a fundamentalist televangelist on the tv screen – vs the liberated 1970s generation – you can’t get more open-minded than shooting a porn film. The young people are emblematic of the Free Love Generation – even the boyfriend (Owen Campbell) of the sound girl (Jenny Ortega) is left without any real excuses as to why not when she announces that she wants to appear in the film. Equally, you can start to see a darker undertow to some of the younger people – for all his celebration of free and open sexual mores, Martin Henderson is a huckster, while for all her Final Girl innocence, Mia Goth’s Maxine is propped up by a coke habit, repeating positive self-affirmations “I’m a fucking star” and in the end is seen running away from a fundamentalist home life.

Ti West draws direct connection between the two groups – often at times splitting the screen or cutting between the seniors and the porn film crew as they do various things in tandem. The contrast is most directly made when it comes to Mia Goth playing both the young Maxine and the aging Pearl (in some amazing old age makeup where it took some way into the film to twig that it is the same person). The two characters are psychic opposites – Maxine who is wanting to be a star and everyone calls incredible during the one sex scene she shoots, vs Pearl, who has lost her youth, is sexually frustrated with a husband who can no longer get it up and is in imminent danger of a heart-attack should he do so.

On a subtextural level, the film has a fundamentally absurd premise – an elderly woman is sexually frustrated by her husband’s ability to perform in bed any longer and so takes to killing younger, more able and sexually carefree people. I will leave the greater meanings of that to be drawn out by the feminist studies classes and culture critics. What can be said though is that Ti West ably deals with the premise by making a stylish film out of everything – you are drawn to the sheer grotesquerie of the scene when he choreographs two octogenarians having sex with the same techniques he did in filming the younger actors in the porn film.

The other worthy thing that X does is to highlight to the greatly underrated Mia Goth. Goth is an actress that one has been consistently noticing in undeniably interesting roles in films like Nymphomaniac (2013), The Survivalist (2015), A Cure for Wellness (2016), High Life (2018) and Suspiria (2018). The roles she has taken in these are not exactly the ones that young starlets are advised to take by their agents – a preference for indie and arthouse works, while quite a number of these involve her in a state of undress. Goth has yet to find a role that allows her the opportunity to shine rather than be a supporting player. It could well be that X is the film that gives her the lift that carries her to a wider audience. Certainly, her performance as Maxine gives the film a luminous beauty (even at the same time as Maxine is quite a self-absorbed character), while her work as Pearl is an amazing piece of transformation that gives the film another whole dimension.