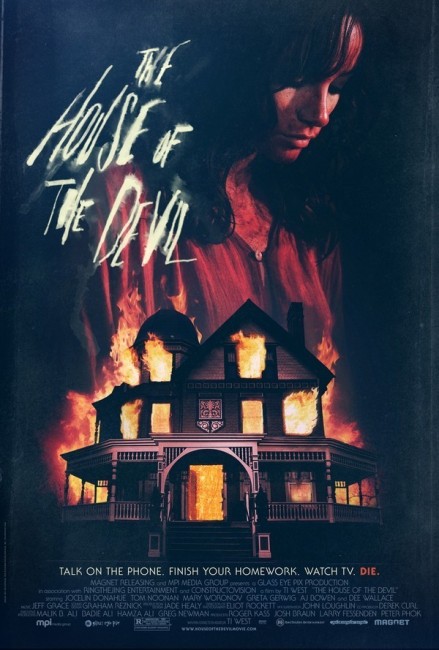 Samantha Hughes, a university student in West Virginia, is low on money. She answers an ad for a babysitter wanted that she finds on a campus notice board. The man she contacts says he will meet her shortly but fails to turn up. Returning to her dorm room, Samantha finds an apologetic message from the man who begs her to come that night. Samantha’s best friend Megan drives her out the couple’s house as the lunar eclipse nears. Once there, the strange Mr Ulman says he has not exactly been truthful – he tells her that they do not actually have a child but asks Samantha to instead look after their aging mother. When Samantha is dubious about this, Ulman offers a good deal of money if she will stay. However, once she is alone in the house with the mother, Samantha finds that something creepy is afoot and that things are not what they seem.

The House of the Devil looked a promising title in the offering – it is one horror film of recent vintage to receive some very favourable genre press. It was the third effort from Ti West who had previously made two other horror films with The Roost (2005), Trigger Man (2007) and Cabin Fever 2: Spring Fever (2009). West would subsequently go onto make the even more acclaimed ghost story The Innkeepers (2011), The Sacrament (2013) about a sinister cult and the Western In a Valley of Violence (2016), as well as episodes of the anthologies The ABCs of Death (2012) and V/H/S (2012).

It was Ti West’s stated intention to make The House of the Devil appear as though it were a forgotten film of the 1980s. West clearly draws on the whole Babysitter On Her Own genre that sprung up from the likes of Halloween (1978) and When a Stranger Calls (1979). He fills the supporting roles with cameos from actors who found their calling during the 80s horror film – Dee Wallace, cult queen Mary Woronov and Tom Noonan who was the original Tooth Fairy in Manhunter (1986). Welcomely, The House of the Devil is one film that homages 1980s horror but does not come with all the genre in-references, in-jokes and quotings that have affected almost every film in this vein since Scream (1996).

Though The House of the Devil features teenage girls as characters, it can by no means be counted as one of the modern 00s teen horror films – the performances are naturalistic, they come from ordinary characters that happen to be teens, not actors that have been posed for their looks or come with a cynical genre-informed self-awareness. Jocelin Donahue gives a warm, credible and convincing performance in the lead. Elsewhere, the great Mary Woronov is disappointingly underused but Tom Noonan gives a fine, creepy performance where he affects a timidly apologetic manner that manages to seem disconcertingly off-centre.

The House of the Devil is certainly a far slower and more mood-absorbed effort than any other horror film being put out at the moment. Ti West’s visual style is ordinary and bland, almost to the point of being dull at times. West absorbs one in the quietude and builds a slow brooding mood. He certainly draws us in and makes us feel every moment of Jocelin Donahue’s boredom as she wanders through the house trying to find something to do. One is left waiting in anticipation for all of this to explode into something. The disappointment of the film is that Ti West fails to provide anything to adequately pay off the build-up. There is one jolting scene 37 minutes in where Greta Gerwig’s car stalls and then a guy (A.J. Bowen) appears and offers to light her cigarette, before he asks puzzled “Are you not the babysitter?” and then abruptly shoots her in the head. The film needed more of these jolt out-of-the-blue surprises.

Eventually towards the very end, everything explodes into action but this is actually the least satisfying part of the film. It is no particular surprise about what is going on thanks to the opening title card that talks about the statistics of Satanic abuse cases in the US or with Tom Noonan dropping far-too-obvious hints about the eclipse and Jocelin Donahue being perfect for their needs.

What one wishes that The House of the Devil had done here is produced something wild and unexpected out of the hat, had subverted expectations instead of led to the exact places that the build-up expects one to do. The elements of the genre that the film wields after unveiling its surprise here are all stock ones from the Satanism/occult genres. This makes the downbeat twist ending the film goes out on, which only rehashes Rosemary’s Baby (1968), a disappointment. It is a film that one keeps wishing would have produced more than it eventually does. Still, The House of the Devil is promising enough that I will be following Ti West with interest to see what he produces next.