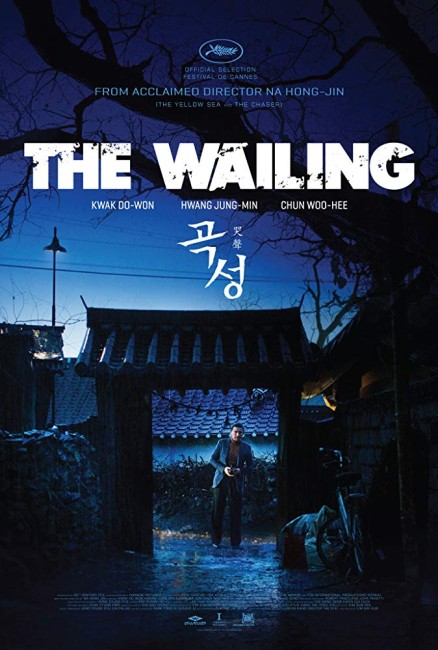 In the village of Goksung, police officer Jong-Goo investigates two murder incidents in which the survivors are left crazed. He is also troubled by visions in which he sees a Japanese stranger to town eating the raw flesh of animals and people. Jong-Goo goes to investigate the Japanese man’s cabin in the woods and is shocked to find photos of the victims and one of the sneakers of his daughter Hyo-jin. Hyo-jin meanwhile has become increasingly more disturbed in her behaviour. A shaman is brought in and determines that the Japanese man is a ghost who is bringing ill on the town. The shaman believes Hyo-jin is possessed and attempts to conduct an exorcism. As Jong-Goo becomes more deeply intertwined in the events afflicting the village, he realises that he is dealing with rival shamans and cannot be sure which he can trust.

The Korean horror film has been a steadily rising genre of its own since the late 1990s. Much of the earlier material was just copying the J-horror fad created by Ring (1998), Ju-on: The Grudge (2003) and so forth but filmmakers have started to find their feet with growing strength since then, in particular the frequent genre dabblings of Park-chan Wook. 2015-6 seemed to be a particularly good year for Korean horror with the zombie film Train to Busan (2016) becoming a huge breakout hit with international audiences, while The Wailing and the earlier exorcism film The Priests (2015), all released within an eight month period, also made solid showings.

The Wailing was the third film for Na Hong Jin, a rising name in South Korean cinema, who had previously made the non-genre likes of the action film Chaser (2008) and the violent crime thriller The Yellow Sea (2010).

I was aware of the international presence and strong reviews that The Wailing was receiving when I sat down to watch it. It is perhaps this that took the edge off my expectations somewhat. The film is definitely a slow burner. Running at 156 minutes, the story takes its time to develop – after over an hour of runtime, we are still trying to piece together what exactly is going on.

Certainly, the film draws us in to a progressively darkening situation and gets undeniably creepy at times – the strange deaths around the town, visions of the Japanese man eating flesh in the woods, the possession of Kwak Do-won’s daughter, the exorcism, the showdown with the mysterious Japanese man, the appearance of a zombified man in the woods.

The biggest issue I had with the film is that I couldn’t really figure out what was going on. It may be I was not concentrating enough but I think it is more likely that the film swings a complex plot but never fully lets us know what is going on. [PLOT SPOILERS] By the end of the film, we have three different people – the shaman, the Japanese man and the mysterious lady in white – all claiming to be shamans and each claiming that the others have malevolent intent towards Kwak Do-won’s daughter.

[PLOT SPOILERS] During the last quarter of the film, the allegiances and perception of who is on what side keep shifting around from scene to scene leaving you in complete confusion. There is also the scene near the end where the priest (Kim Do-yoon) enters the cave to discover that the Japanese man is literally The Devil, which adds further bewilderment.

To be honest, I reached the end of The Wailing undeniably absorbed in its mystery but no clearer as to who was responsible for the events in the village, nor for that matter how any of these tie back to the murders in the early scenes.