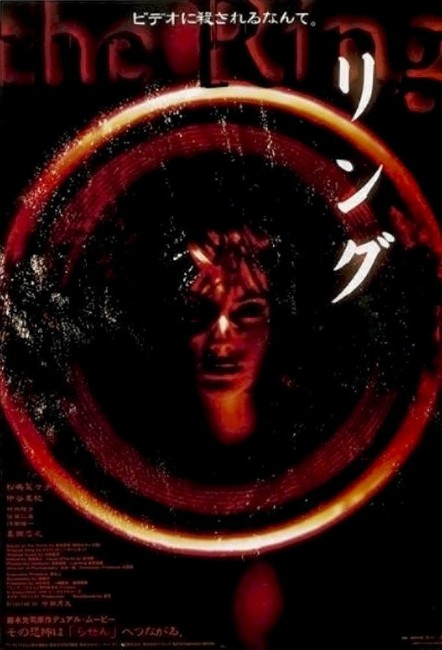 TV journalist Reiko Asakawa does a story on a growing urban legend centred around a haunted video broadcast. Accordingly, if one tunes to a particular channel, they will receive the image of a woman followed by a phone call that warns them that they have one week to live – and within exactly seven days all recipients have purportedly died. As Reiko investigates the spate of deaths, she discovers and views the videotape, then receives the phone call and realises that the curse is true. She and her ex-husband race to try and stop the curse before Reiko’s seven days are up. The trail of clues left on the videotape leads them to uncover a mystery involving a psychic woman who committed suicide after being ridiculed for predicting the eruption of a volcano and the murder and burial of her daughter down a well.

Ring was one of the biggest genre hits in Japan in the last decade. Its success has spawned two sequels, The Spiral (1998) and Ring 2 (1999), a prequel Ring 0: Birthdays (2000), which tells Sadako’s story, and a twelve-episode tv series Ring: The Final Chapter (1999). This was followed by a South Korean remake The Ring Virus (1999) and a surprisingly good Hollywood remake The Ring (2002), which also spawned two sequels The Ring Two (2005) and Rings (2017). These were followed a few years later by two further Japanese sequels Sadako 3D (2012) and Sadako 3D 2 (2013), as well as Sadako vs Kayako (2016), a crossover with the Ju-on/The Grudge series, and Sadako (2019). The novel the film is based on had earlier been filmed as a little seen Japanese tv movie in 1995. Ring was an enormous success and has been copied by numerous other films throughout Asia, most of which readily borrow the central image of the long-haired ghost girl.

There is a good and original idea at the heart of Ring – that of a haunted videotape/tv broadcast. The film is canny enough to pitch the idea as an urban legend (being spread wholly, it seems, by schoolgirls). The film is effective in the scenes with the heroine and her ex-husband examining the tape and trying to piece the mystery together. In the lead, the beautiful Matsushima Nanako creates a sincere and honest onscreen presence that carries much of the film.

However, the idea disappointingly tails off into a routine paranormal murder mystery. The plot is not too different from the likes of Eyes of Laura Mars (1978), Sensation (1994), and tv movies like Baffled! (1972) and The Eyes of Charles Sand (1972) wherein, having raised supernatural phenomena, the film sidetracks altogether from exploring the idea and its implications and engages the protagonists in a pedestrian whodunnit solving the deaths of murdered people.

For the success that Ring enjoyed, it is surprisingly crudely made. It is not without its effective moments but is relatively rudimentary both stylistically and technically. Director Hideo Nakata tends to deal in crude effects – loud noises on the soundtrack, freeze-frames on the faces of corpses, screaming faces in negative (the latter two are surely the cinematic equivalent of typing everything in caps with lots of exclamation marks).

Nevertheless, Hideo Nakata does eventually evince a certain atmosphere of dread, aided in large part by an eerie score. Towards the end, he crafts two well sustained scenes – the descent into the well, which contains one good shock moment with a grabbing hand that makes the entire audience jump. The other is a genuinely eerie and otherworldly scene where the ghost girl crawls out of a tv set, her long hair entirely covering her face and comes in pursuit of her victim.

There is also a good final twist – albeit one that undeniably borrows from Curse of the Demon/Night of the Demon (1957). Both Hideo Nakata’s sequel Ring 2 and the Hollywood remake however are much more polished films than this.

Director Hideo Nakata was acclaimed as a result of Ring. It was his third film. He had earlier made the ghost story Don’t Look Up (1996). He next went onto make the kidnap thriller Chaos (1999); the documentary Sadistic and Masochistic (2000) about a Japanese porn director; Sleeping Bride (2000), a peculiar modernised take on Sleeping Beauty concerning a girl in a coma; Last Scene (2002), a drama concerning a former Japanese movie star; before returning to the horror with Dark Water (2002); travelling to the US to direct the English-language The Ring Two; the ghost story Kaidan (2007); L: Change the World (2008); the English-language Chatroom (2010); Incite Mill (2010) about a reality tv elimination game; the ghost story The Complex (2013); Monsterz (2014) about a man with mind-control abilities; Ghost Theatre (2015); and a return to the Ring franchise with Sadako (2019).