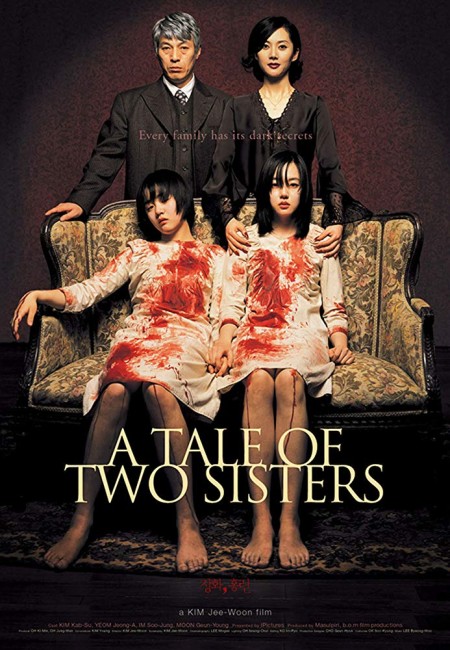 Placed in an asylum, teenager Su-Mi is pushed by a psychiatrist to remember the events that led up to her being there. She returned home to join her father and younger sister Su-Yeon. Neither of them liked their father’s new wife Eun-Joo who insisted on them calling her their mother. Su-Mi then discovered bruises on Su-Yeon’s arms and believed that Eun-Joo had been physically abusing her. At night, they were both scared by noises in the house, things creeping into the bed and visions of unearthly figures. Su-Yeon comes to believe that these related to Eun-Joo’s increasingly apparent mental unbalance.

In recent years, Asian horror has become a force to be reckoned with. After the massive success of the Japanese Ring (1998), there was an explosion of Japanese horrors, which was copied by other countries throughout the region, in particular South Korea who created a number of successes of their own. Following the hit of The Ring (2002), the Hollywood remake of Ring, a great many of these Asian horror properties were then brought up by Hollywood and given English-language remakes. Indeed, A Tale of Two Sisters was procured for a Hollywood remake as The Uninvited (2009).

A Tale of Two Sisters is apparently based on a Korean fairytale, which has been filmed three times before – although details about these other versions are spotty. Director Kim Jee-woon had previously made the black comedy The Quiet Family (1998), which ended up getting remade as Takashi Miike’s gonzo The Happiness of the Katakuris (2001). Kim subsequently gained some international acclaim with the ultra-violent gangster film A Bittersweet Life (2005), the Western The Good, The Bad and the Weird (2008) and the brutal revenge film I Saw the Devil (2010), before coming to the US for the English-language action film The Last Stand (2013), and returning to Korea for the anime adaptation Illang: The Wolf Brigade (2018). He has also made episodes of the genre anthologies Three/Three Extremes II (2002) and Doomsday Book (2012).

Kim Jee-woon attains a more than reasonable degree of haunted effect. The first night when the two girls settle in to go to sleep holds a good deal in the way of spooky creeping around the house. There is an incredibly eerie scene where a ghost in black creeps past the end of Im Soo-jung’s bed, standing with her neck seemingly broken and then jumps up on the bed, towering over Soo-jung. There is a great scene on the way home from the dinner where sister-in-law Kim Kab-su says, “I saw a girl under the sink.” Next, stepmother Yeom Jeong-a is in the kitchen and we see a flash of something rotting under the sink, then see the cupboard open and a girl in green appear behind Jeong-a as she investigates. There is a considerable jolt as a pair of hands suddenly jump out at Jeong-a from under the sink and she turns to find the girl in the green dress standing there.

Kim Jee-woon shows a mastery in the manipulation of suspense in these scenes. There is the undeniable (and probably inevitable) influence of Ring and Ju-on: The Grudge (2003) in the images of the unearthly girl with hair across her eyes, who comes accompanied by croaking noises. It is also unusual seeing a haunted house film being conducted in South Korea where the cliche Gothic mansion with billowing curtains is not something that exists in Korean interior decoration and architecture and so the basics end up being translated across cultures.

There is a particularly good, highly-strung performance from Yeom Jeong-a as the evil stepmother. In one very strange scene, she sits at a table and tells a story about a mentally ill son who ran out onto the road every time it rained, oblivious to the fact that none of the guests are laughing, where we keep expecting a punchline that is going to wholly embarrass her, only for the sister-in-law Kim Kab-su to suddenly fall to the floor in a convulsive fit.

The problem one has with A Tale of Two Sisters is the big twist revelation. [PLOT SPOILERS]. One successfully predicted the twist that Su-Yeon was dead all along. Kim Jee-woon tends to give the game away a little too obviously by never showing the father and the younger sister Moon Geun-young together in the same shot and in doing so it seems more than a little obvious that we are heading into the same territory as The Other (1972). This has almost certainly been born of an attempt on the part of the filmmakers in trying to emulate the big surprise twist of The Sixth Sense (1999).

[PLOT SPOILERS CONTINUE]. However, this revelation never makes much sense – like why the new wife Yeom Jeong-a can also see the dead Su-Yeon and treats her as being there as well. It is also never entirely clear which scenes are flashbacks and which are taking place in the present. Confusion doubly results when we see that Su-Mi is a patient in a hospital and that much of what has happened is all in her head. It is also never clear at the end who was responsible for Su-Yeon’s death. This makes A Tale of Two Sisters into a film that is more about M. Night Shyamalan-esque unveiling twists and surprises than it is one of clearcut narrative. Things are certainly clearer in the US remake The Uninvited.